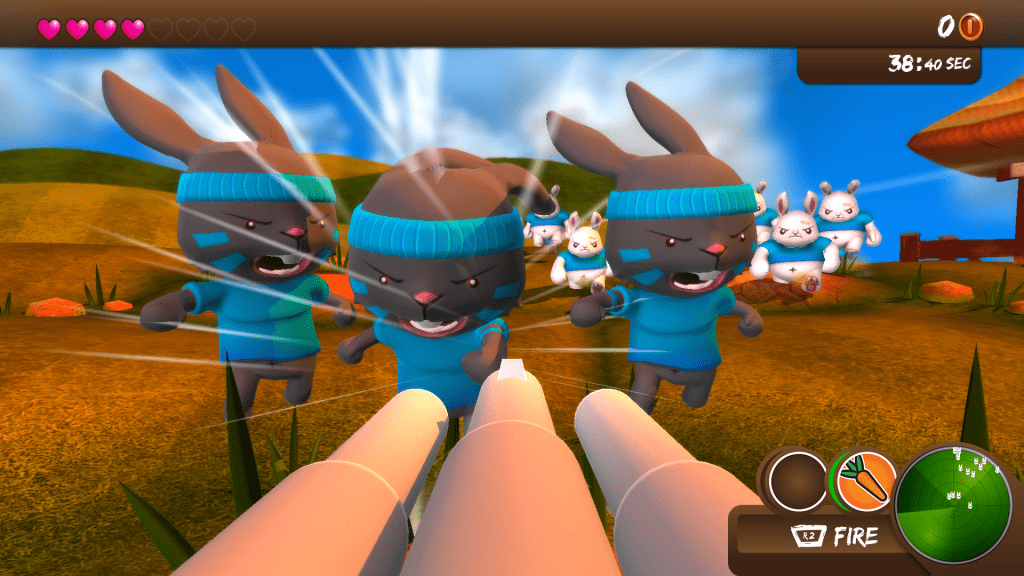 Despite quite a lot of last minute planning on my part (Damn end of semester assignments), my EB Games Expo 2013 schedule was jam packed. I did however find myself spending quite a lot of time in the section of the event dedicated to Australian independent development. One of the particular highlights of this area was Nnooo’s booth where they showcased a number of the upcoming games they were publishing – including newly announced Blast ‘Em Bunnies for the Playstation 4, Playstation Vita and Nintendo 3DS. They also had this game on display at the Playstation booth, but who could pass up on skipping the hour long PS4 queues when there was also the option to sit down with the development team and experience what should be the ultimate edition of the game?

Just for the record, at this current time there is no formal release date for Blast ‘Em Bunnies, nor is there any indication that what was showcased for the first time at the EB Games Expo represents a final product. Therefore while there was a lot to like about the game, there were a few issues that I will mention but might not be present in the final release. Also be sure to keep an eye out on The Otaku’s Study over the next couple of days for my interview with Nic Watt, creative director at Nnooo.

Blast ‘Em Bunnies starts off with a very simple premise… with your three barreled gun you must shoot all the bunnies coming towards you on the screen in order to keep your own bunny alive as long as possible. The game’s preview started off very simple, with a few enemies coming towards you on the screen that could easily be taken out. For the first minute I was left wondering if this was nothing more than a concept demo of what would come. Then when the second round began… what was were things became more interesting… and a whole lot more harder. 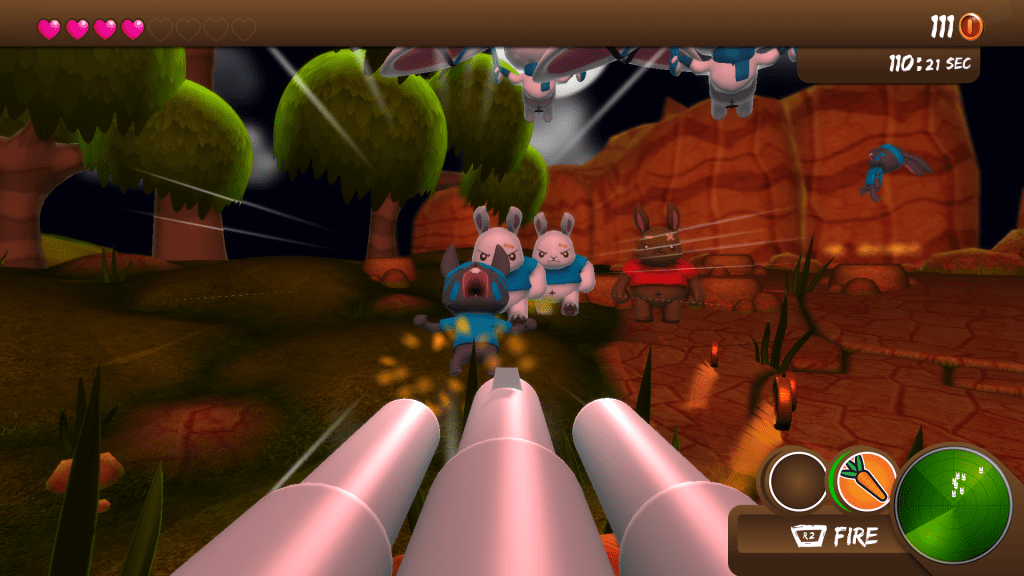 While you are given standard ammo that never seemed to expire (However holding down the R2 fire button did require a cool-off period after awhile), bunnies you defeat will also drop coins and extra weapons for you to pick up. These weapons tie in with the comical and eccentric nature of the game by all being fruit based such as the standard carrot shooter, pumpkin bombs and sticky exploding raspberries. These are necessary against the many different bunnies you will come up against, ranging from those that pace forward at different speeds to some that can fly.

I will admit I didn’t get all too far through my playthrough before succumbing to the onslaught of the bunnies. However it seems like what I experienced in the demo was only the tip of the iceberg. They have indicated a multitude of other weapons and enemies will be at your disposal – including a rescue mission scenario where randomly you will have to save a baby bunny from a “throat slitter” evil bunny. I will leave it up to your imagination what happens if you fail.

While it is hard to tell how the game will be overall in a five minute sitting, what I experienced was simple fun with its own quirky twists (complemented by a colourful and cartoony design) – and as Sony Computer Entertainment were showing it off on the Playstation 4’s at their booth, it was a great title to show off some of the early indie developments for the new console. Blast ‘Em Bunnies is designed to be a typical “endless shooter” game with increasing difficulty, but I am interested to see what else they include as the games development continues. Multiplayer? Online functionality? Story Mode? Time will tell.

Unfortunately there was one issue which I hope they will refine closer to release date. Rather than using the DUALSHOCK 4’s touchpad or the left/right sticks, Blast ’em Bunnies relies on the six-axis motion sensing / gyroscope systems built into the controller. I am not against the idea of using this control system for the game, instead I think it was the better decision to help deliver a greater sense of immersion. However at this stage of development aiming was at times difficult and as enemies come towards you at all 360 degrees, I found myself having to reset the controller position several times so I was not twisting my spine to look forward (Fortunately this was done by a simple button press).

Avoiding the hour or two long queue to try out the Playstation 4 aside, Nnooo’s booth and Blast ‘Em Bunnies proved to be one of the big reasons to check out the Homegrown Gaming Area at the EB Games Expo. While I will save my final verdict for the games review when it is eventually launched next year, it is certainly a game that should be on your radar when you purchase a PS4 (or if you are after a decent Playstation Vita / Nintendo 3DS digital download title at a reasonable price).

As this upcoming generation is the first where indie development is active from the beginning. If this is an indicator of the start… I am very much looking forward to the next few years.