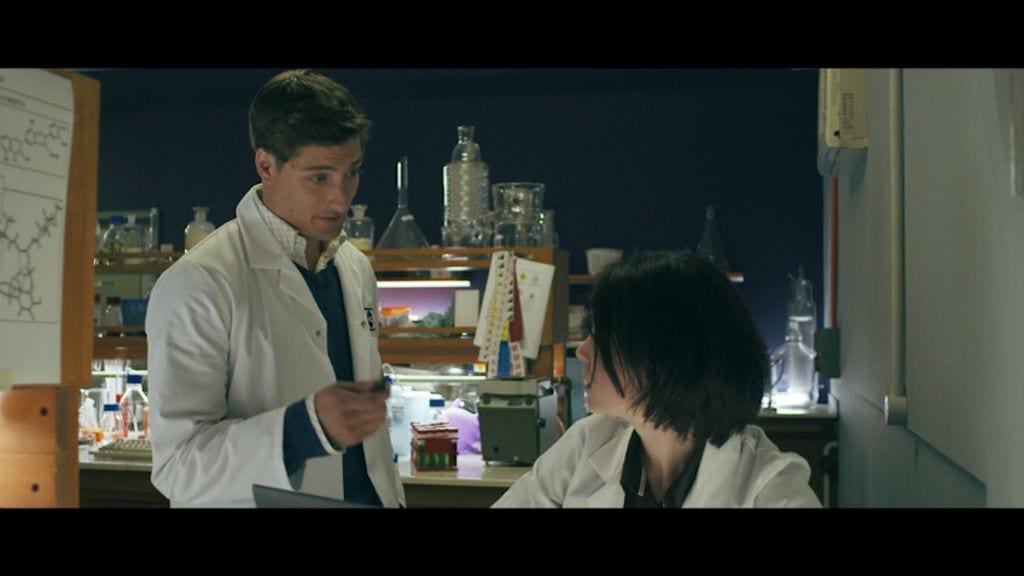 What was supposed to be another ordinary day in the lab instantly turns into chaos for aspiring young scientists Beth Wakefield and Ryan Earl. Their supervisor who had gone missing for several hours storms into their lab, infected with a lethal and fast-acting strain of cancer. A simple command “Go to my computer!” leads them to discover a secret that has been hidden from public view, a universal cancer cure. Trapped in the building and hunted down by hitmen sent to prevent the research from ever being made public, ‘The Cure’ presents the trio’s struggle to survive as they begin to uncover the dark secrets of their employer and their own perspectives on the research begin to collide.

‘The Cure’ may sound like fuel for conspiracy theorists, however it has turned out to be a commendable film experience from the Queensland-raised director David Gould who looks to branch out from his usual visual effects roles in productions such as the critically acclaimed The Lord of the Rings trilogy and The Adventures of TinTin. “20 years ago my mother passed away from cancer itself, she had bowel cancer and she’d been through all the variety of treatments that were available at the time including surgery and nothing really worked” said Gould when discussing his inspiration for the film. “She eventually passed away and I think I always had in the back of my mind, ‘what if’ there was a cure out there and I wasn’t able to find it or someone had kept it secret”. This idea became the foundation for ‘The Cure’. 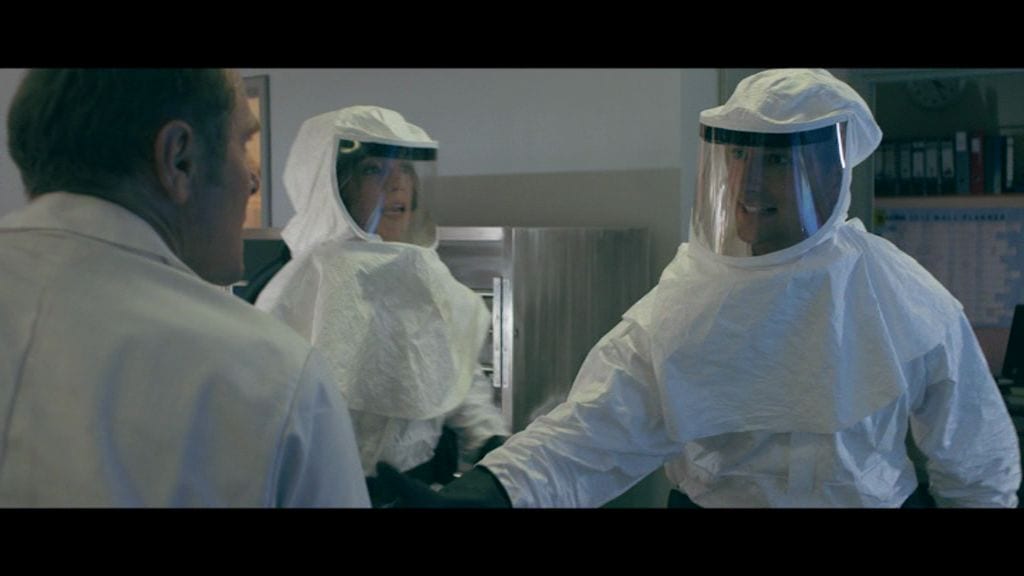 Ultimately only a small number of films receive a full cinematic release with multi-million dollar box office sales. Most others rely on digital distribution and film festivals to make a name for themselves and raise the funds to at least break even on the cost of production. But without any funding from external organizations, Gould had a lot more riding on the success of ‘The Cure’. During a public Q&A, he acknowledged that after being rejected for funding from groups such as the New Zealand Film Commission he decided to mortgage his house and use those funds for production. Putting everything financially on the line was a risky decision, however it highlighted that Gould had a strong belief that this project would be successful. It may be too soon to tell how successful it will be worldwide, however this reviewer left the screening more than satisfied and judging from the crowds queuing up to purchase the DVD afterwards it is safe to assume I wasn’t the only one.

Taking into consideration, like many independent films there was not a multi-million dollar budget available to the production team, ‘The Cure’ manages to deliver a strong cast consisting of both veterans and newcomers to the industry, as well as an innovative script that delivered the right amount of intensity for a thriller. It also worked well within the limits of its budget rather than being overly ambitious and potentially forced to cut corners later in production. ‘The Cure’ highlights the charm of independent films, where a good idea and inspiration can provide an experience even more appealing than most box office flicks. 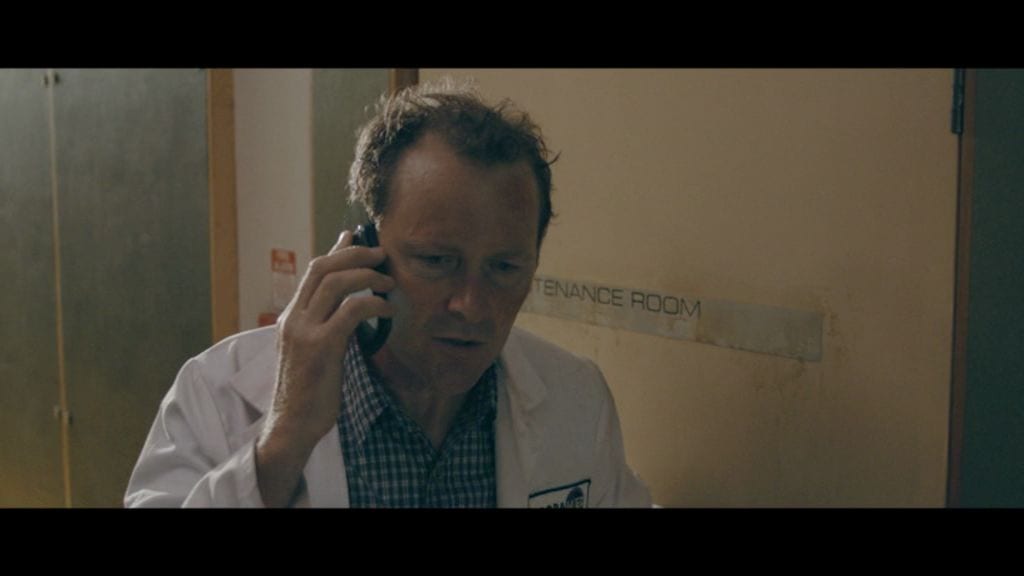 New Zealand actress Antonia Prebble (White Lies, Outrageous Fortune) takes the lead role as Beth Wakefield, a young scientist who enters the field of oncology with the goal of finding a treatment for cancer after losing her father to cancer when she was a child. Her character is clearly based around Gould’s own personal experiences of cancer, with her goal from the beginning being to make the treatment public without charge. She is joined by Daniel Lissing as Ryan Earl who serves as a colleague and romantic interest who holds the opposing view of making a profit from the universal treatment of cancer and Stephen Lovatt as their supervisor Ted Garner whose main concern is to produce the treatment for himself. The cast manages to meet the demands and emotions of their respective characters well. While 90 minutes isn’t nearly enough time to develop each of the characters in-depth, they were well incorporated into the events envisioned by Gould with all three effectively contributing as main characters to the plot.

While the conclusion is made fairly obvious at the beginning of ‘The Cure’, there is rarely a dull moment from start to finish in this ninety minute thriller. ‘The Cure’ also allowed Gould to showcase his experience with visual effects and CGI, the standard being well above what you would expect from a lower budget production. While it might not have been the best film on offer at this year’s Gold Coast Film Festival, ‘The Cure’ managed to fill the entire theatre for its screening and proved to be well worth the watch for fans of the thriller genre. 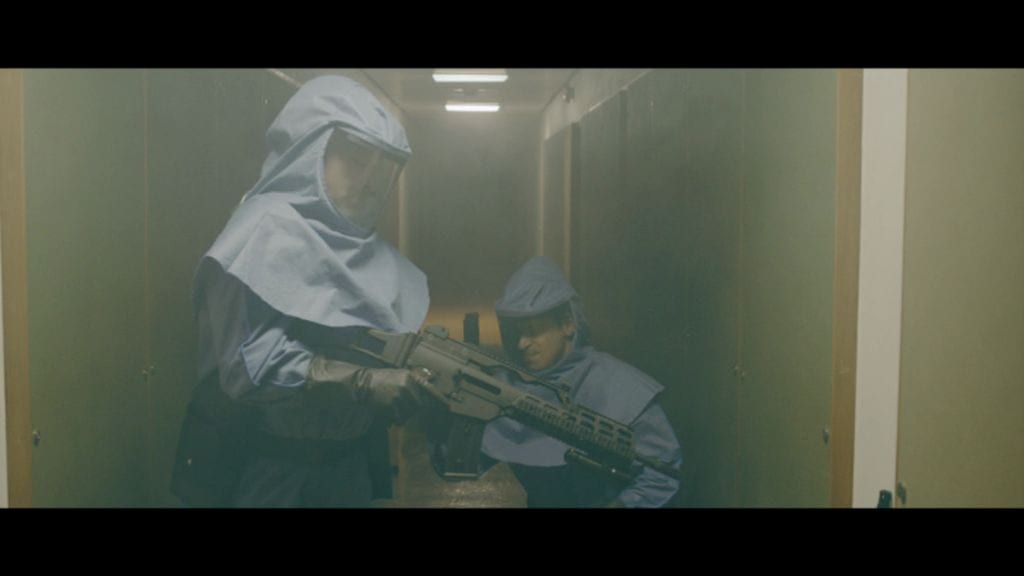 Kylie Pascoe, Festival Director of the Gold Coast Film Festival had this to say on Gould’s attendance at the event “To have someone like him here was great, as he was almost like the quiet achiever […] he’s a success story and I love to see that in film makers”. Festival Board Chairman Richard Featherstone continued “I think it’s fantastic to have somebody like David who worked in the industry and had his first short film which has been highly received, and now six years later he’s on the next level. Hopefully the next time he comes back he could be the next Peter Jackson”.

David Gould’s previous roles in the film industry have been more behind-the-scenes, and after branching out into several short films, ‘The Cure’ was a way for him to make a name for himself in the industry. With a number of live action features already in the works, this may be the foundations of a very promising career as a director. But most importantly does he think that ‘The Cure’ was a project worth following in the end? His response was a resounding “Yes, absolutely”.

A complementary ticket was provided by the Gold Coast Film Festival for the Australian première of The Cure. A DVD release was purchased on the night out of my own pocket. The full contents of my interview with David Gould, Director of The Cure will be published soon on The Otaku’s Study.

This review was previously submitted as an assignment towards University credit. The assignment had a strict word count, therefore is different from my regular reviews.

In October 2017, 325 international backers (including myself) raised ¥8,980,540 to support the localisation of the feature film Kud Wafter Returns, an anime adaptation of...
Read more
Films

We would have all had this sensation while browsing online - one minute being mentally engaged in something and the next suddenly bored and...
Read more
Films

Could Torchwood Be Returning to Our Screens for a 5th Season?

Among the many surprises during Season 12 of Doctor Who last year, one of the big ones in Episode 5: Fugitive of the Judoon was the...
Read more