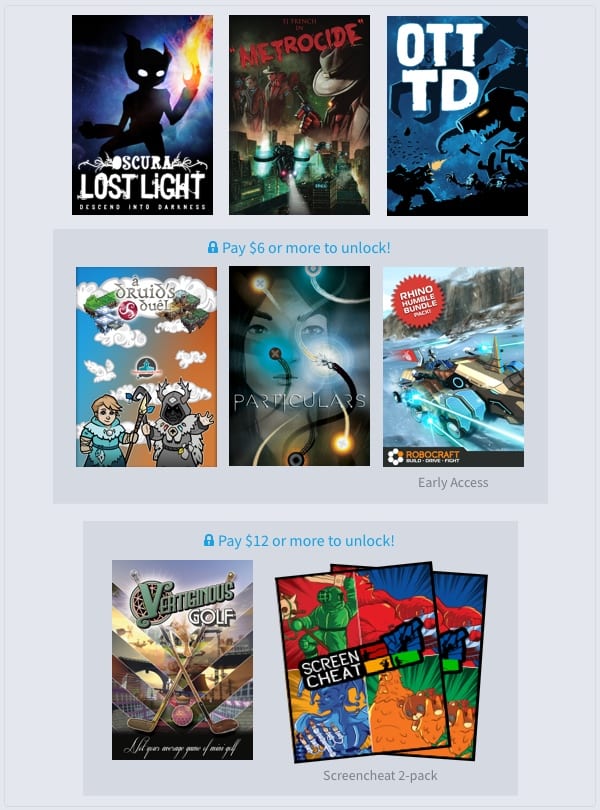 It has been confirmed that Australian publisher Surprise Attack Games are being featured in the newest Humble Weekly Bundle – which allows gamers to nab themselves up to eight of their diverse titles at a very reasonable price. This sale will be held until May 14th 2015 at 11AM Pacific Time, and as of writing has already seen 11,804 bundles sold and rising, having raised almost $52,000.

Donating any sum of money will nab you copies of Oscura: Lost Light, Metrocide and OTTTD. All three feature Steam codes, and also come with a DRM-free version. Those looking to pay at least $6 will be able to nab themselves copies of A Druid’s Duel and Particulars, in addition to Early Access to Robocraft Pack. Finally for at least $12, you can acquire two of Surprise Attack Games’ biggest and most recent titles: Vertiginous Golf (Released only a couple of days ago) and a 2-pack for Screencheat.

As always, this bundle allows you to share the money spent on your purchase between Surprise Attack Games, Humble and charities (This time around, both Oxfam and Save the Children who are supporting Nepal earthquake relief programs).