While not all of these games have ever had a release outside of Japan – Namco Bandai, Sega and Capcom have each released many intriguing titles and with them some interesting character personalities and relationships. Following up from a comparable Japan-only release of Namco x Capcom back in 2005 for the Playstation 2 – Monolith Soft alongside the three other companies brought Project x Zone into fruition. In what they have been heralding as the ultimate cross-over game with a sizable character cast – Project X Zone sees characters from many franchises from each company come together to face a new threat. Question is…. does the storyline flow well considering there are quite possibly going to be unfamiliar characters in the mix?

The one issue with crossover games in past years such as Cross Edge, is that while you can fill a storyline full of to the brim with fun references to the different characters it is much more difficult to have the plot flow in a cohesive manner without leaving a viewer either bored or lost in the progression. Especially at the beginning of the game through a multi-faceted prologue where they like to yank you from realm/reality/timeline to another spontaneously, I thought it was quite easy to lose track of so many substantially different events that surrounds each of the different characters. In addition to this while the character interactions are comical or nostalgic depending on your familiarity with the source series, the writers do occasionally lose track of their own storyline to implement nods to scenes or events from earlier games rather than the issue at hand.

The storyline? An item known as the PortalStone has been stolen from the Kouryuuji estate, and since then a number of mysterious portals have been appearing in everything from the side of a building to a fountain which has been drawing heroes and villains alike from various realities and timelines and plopping them in the dimensions of other games. The game exclusive “protagonists” (To use the term loosely) Mii Kouryuuji and Kogoro Tenzai notice this disappearance however before long they are also drawn into the portals alongside the others. From there it expands into a sizable number of chapters where the characters slowly get added to your party roster and the already confused characters are left wondering how they can remedy this situation despite more enemies from different games keep appearing and half they time they have no idea where they are. 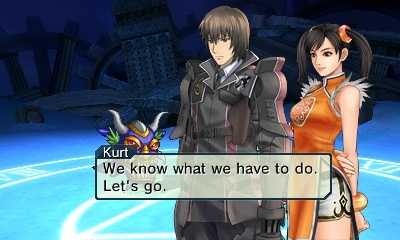 While the storyline is unnecessarily confusing as I hinted above it is filled to the brim with references to the different characters and storylines from each of Namco Bandai, Sega and Capcom’s included franchises. From simple references such as the coma plotline in the .hack// series to more tongue in cheek references such as Frank West’s taking photos of almost every (female) villain he meets… there is a treasure trove of game tropes to uncover and even if you get lost in the storyline there is at least some value in playing the game just to find them. Main plot events to post-battle dialogue, there are references to past releases everywhere.

Especially if you reside in PAL Regions where less last-generation RPG’s were available in our market than North America, not all characters been seen in a release on the international market. While it is possible to get away with some of them (For example: With Neneko, while the Yumeria video game never hit international shores the anime did) – references to games such as Namco x Capcom, Valkyria Chronicles III and Shining Force EXA (In PAL Regions) may not be so easy to get away with. While not a replacement to actually playing these titles there is the Crosspedia which available from the game menu provides a small biography on each of the characters you have seen – a great way to recap on characters you have forgotten about from generations ago.

Overall the storyline once fails to produce a cohesive and easily approachable crossover game storyline however when coupled with some enjoyable references and nods to franchises from all three companies it makes for an average experience overall. 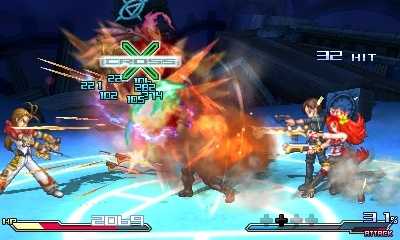 The one area that Project X Zone truly shines is in its design. As the development team did with the storyline, they do like to nod to the different games and make use of the wealth of ideas of areas available from the source material to produce some rather nice battle environments. Therefore you will be fighting in areas such as Hulle Granz Cathedral from the original .hack// games and the shopping center of Willamette before it was overrun with zombies in Dead Rising. Despite usually being in a completely different style to the original games, they recreated such areas well.

As this is a tactical SRPG, all characters in this game are represented by sprites on the battle map as well as during battle scenes. While on the maps they are pretty average in design, once in the separate battle area they enter a side-on view and are actively animated and it becomes evidently they haven’t skimped on the quality. Despite there being so many playable characters in the game, they are often actively animated and even make references to attacks the characters would have used in their own game. Use of special and support skills during also provide special anime visuals.

Dialogue in handled via your usual visual novel system with static character portraits. Given how many they had to produce they are of an okay quality, however lack the variety I would have hoped to have seen. 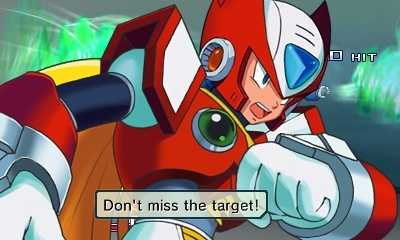 For the bad news first, it turns out that during their localization process Namco Bandai were able to keep the animation of the games opening sequence in tact however have only been able to include the instrumental version of the track. That being said this is the only real bad news in terms of music for Project X Zone. The good news is that with the wealth of games and in turn a wealth of music at their fingertips – Monolith Soft were able to select and remix a number of great battle themes based on each of the games the characters are from. From Resonance of Fate to Mega Man there are generally one or two tracks from each game present in this title. Sure not all of them are what I would consider the best choices…. but at least it gives some variety during your battles.

While a fair few of the characters have English dub counterparts on the market already, Namco Bandai chose to retain the original Japanese dub for the game exclusively. While some lines of dialogue are noticeably left untranslated during battles most of the voice actors and actresses have been voicing these characters in other titles as well so it was nice to see some consistency. While if you prefer English dubs this may not be too big a selling point, the Japanese dub is pretty enjoyable.

Have you ever been playing an SRPG in the past and realized that you have more “favorite” characters in your party than you can place out on the field – or otherwise wondered if the other characters of your party have gone off for a picnic while their allies risk their lives against a deadly foe? It seems like the developers may have, as when you have a character added to your party you have no choice but to keep them on the field. While difficulty would seem to be a problem with this, it is supplemented with harder and/or an increased number of foes on each map. It is good to see they are trying to offer some challenge in this as most other staples of RPG’s such as shops and an overworld map/menu are non-existent. The only thing that separates one battle and another is a brief map where you can assign equipment to your characters, save and a few other things.

Given the sizable character cast, battles take place in set character pairs. Characters are usually paired together by series (For example: KOS-MOS and T-elos from Xenosaga) however there are a few exceptions most often involving Darkstalkers characters (For example: Dante and Demitri Maximoff). While you are usually short of them until later in the game, as the chapters progress you will also unlock bonus “Solo Units”, who can be assigned as a third member of a party and perform special assist attacks. As the game makes use of a generic grid tactical RPG map system, if you are in the proximity of another pair of characters you can also perform special attacks with them – meaning you can have five characters battling it out on screen at any one time.

While up to this point the game does a great job at incorporating such a sizable character cast into the battle system without some or many of them being left behind – from here on the game didn’t impress as much. When you initiate an attack against an enemy you get sent to a side-view battle system akin to La Pucelle Tactics only more action inspired. Using a combination of direction and button presses you can initiate different attack commands. When characters harmonize their attack style with their partner or (more likely) with either solo or nearby units  they build up an XP gauge which can be spent on either skills on-field (From extra Experience bonuses to healing) or the pairs special attack for extra damage. Outside of battle building up this gauge allows for them to counter or defend against an on-coming attack.

While there is some art to coordinating your attacks, I felt it was too much of a visual affair and there wasn’t as much strategy that could be involved. With a plentiful supply of health items available, the slow unlocking of new  attacks for battle (Meaning you will spend the first few hours of the game mashing the same button combinations) and there being little to do outside of battle maps I was left feeling they could have done much more with the system they had. That being said it is pretty fun to go through and was simple to grasp from the start.

While by no means a bad game, I am still left a bit undecided on how I personally feel about Project X Zone. While it makes use of the character cast well and is one of the better looking Nintendo 3DS games I have played this year… it is to an extent shadowed by more complex and engaging tactical RPG’s on the market that both requires more strategy in the the battles and offers more to do outside of the battles. Project X Zone is a fun game in short bursts but isn’t something that kept me hooked for hours on end.

That being said, it is an approachable and nevertheless enjoyable tactical RPG and one that still has quite a lot to offer. I would like to see more games adopt the “all party members on the field” approach that Project X Zone took as well.

Overall for Project X Zone I give the game the following grades:

Therefore I give the game an overall average score of C+.