VIZ Media to Release Tiger & Bunny The Movie: The Rising Later This Month 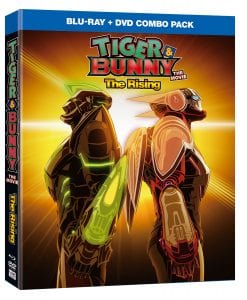 North American anime publisher Viz Media have confirmed that the second film in the Tiger & Bunny franchise, Tiger & Bunny The Movie: The Rising, is set to hit store shelves as part of a DVD and Blu-ray combo pack and standard DVD pack starting February 24th. This release will once again be dual-audio, featuring the original Japanese voice cast and the original English voice cast reprising their roles.

Irrespective of what edition you nab yourself, each set will include the full film in addition to a wealth of on-disc extras. These include official theatrical trailers and promotional videos as well as exciting footage from the film’s San Francisco premiere event, a TIGER & BUNNY TV series special digest, and clean opening and closing segments. The Combo Pack will also include a specialty print foil O-Card, an interview with producer Kazuhiko Tamura, a video production art gallery, a Hero Weekly Countdown and a compilation of Tiger & Bunny commercials.

A standard edition DVD set will cost around $19.98 USD / $24.98 CAN, while the Combo Pack comes in at approximately ten dollars more at $29.99 / $37.48 CAN. The release is currently only available in North America and Canada, with releases in Australia, New Zealand and Europe likely set to follow shortly after.

Fans will definitely enjoy the latest adventures of Japan’s most potent band of corporately sponsored superheroes in this all-new theatrical release. TIGER & BUNNY THE MOVIE: THE RISING picks up after the events of the popular TV series and introduces some dynamic new characters along with a sinister new threat to the city of Stern Bild. The Blu-ray/DVD Combo Pack is a definitive edition containing plenty of extras to make it a worthy addition to any fan’s collection. Get ready for some intense super-powered superhero excitement in this exhilarating new action adventure!