Second Season of ‘Is the Order a Rabbit?’ Likely Underway 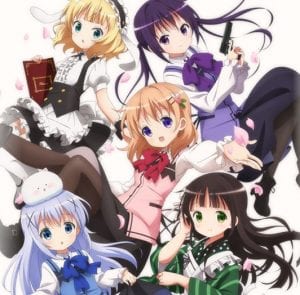 Although information is limited considering that the issue hasn’t been formally released on store shelves yet, the cover of the March issue of Megami Magazine has indicated that a second season of ‘Is the Order a Rabbit‘ (Aka. Gochūmon wa Usagi Desu ka? | ご注文はうさぎですか?) is in the works. This will continue the storyline and character development found in Koi’s original manga series of the same name.

The first season was produced by animation studio White Fox, and started airing in Japan during April 2014 for a 12 episode run. The series has been licensed by Sentai Filmworks for North American distribution, and can currently be watched through video-on-demand services like CrunchyRoll and Anime Network. Despite anime streaming rising in popularity within Australia, no publisher in the region have acquired the rights to ‘Is the Order a Rabbit?’ as of this post.

Want to know more? A synopsis of the first season, provided by Sentai Filmworks, can be found below:

Tea time has never been cuter or furrier! Get ready for a triple shot of adorable, and join Cocoa and her high school friends for a hopping good time as they embark on new exploits, living the good life and hanging out at their neighborhood joint – a quaint café called Rabbit House. Based on the popular four-panel manga, this slice of life, teenage school-girl comedy is just the mid-day “pick-me-up” you ordered. Time spent with friends is great, but hanging out beside a bundle of bouncing and beguiling bunnies makes it all the merrier!

All named after delicious and refreshing beverages, cute Cocoa (“hot cocoa”), tough Rize (“Thé des Alizés” tea), ordinary Syaro (“Kilimanjaro” coffee), frivolous Chiya (“Uji matcha” tea), and cool Chino (from “cappucino”) are destined to be your favorite tea-time companions as all the fun is just a hop, skip, and a jump away in  – IS THE ORDER A RABBIT?