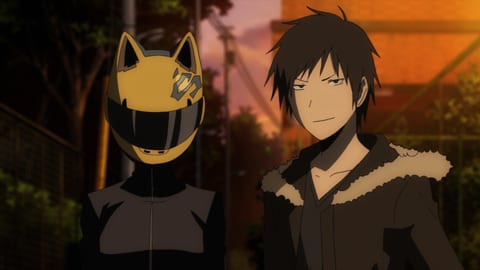 One of the very first titles I reviewed from Siren Visual in 2011, the initially DVD exclusive release is soon to receive a blu-ray release in Australia over two parts.

The company have now launched the pre-order page for the title which is set to launch on the 16th October 2013 at the companies usual half-series price of $49.95.

At the invitation of his childhood friend Masaomi, Ryuugamine Mikado transfers from his home in the country to a school in the city of Ikebukuro. Masaomi has warned him about people he doesn’t want to cross in the city: a champion fighter, an informant, a pharmaceutical company who is commissioning the abduction of women off the street, and a mysterious gang called “Dollars.”

Nervous in the labyrinth of Ikebukuro, Mikado witnesses an urban legend on his first day in the city – CELTY STURLINSON: a headless, black-clad motorcyclist who rides the streets with no headlights searching for its stolen head. From then on, the existence of the supernatural and a gang called the Yellow Scarves will rise to the surface… Ikebukuro will be pushed to breaking point!

Durarara!! moves in every direction – characters cross paths throughout each episode and drift in and out of the story creating a complex, non-linear plot that is thick with twists psychological depth.