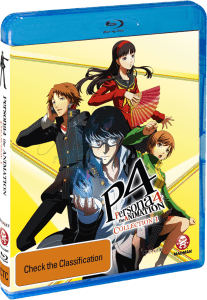 Sentai Filmworks, the North American distributor of Persona 4 the Animation has already released their first Collection and is set to release the second on this December. Over here in Australia things are a bit different… with changes in included dubs and the number of episodes per volume.

The first collections on DVD and Blu-ray are set to hit store shelves in January 2013. The DVD edition will feature a Hybrid Dub and 12 episodes – more or less comparable to the North American edition. The Blu-ray edition which will be released simultaneously will feature a total of 8 episodes but will include both English and Japanese dubs as well, while the North American Blu-ray release only included the English dub (Featuring most of the original PS2 game voice cast).

The Blu-ray release will be released in three installments and will cover the complete series through them (Region B Locked however). The DVD release will feature only two installments and released at the same time as the first and third Blu-ray collections. EzDVD.com.au currently has the Blu-ray edition priced at $39.97 – pricing may differ when pre-orders via Madman.com.au opens and between vendors.

When Yu Narukami’s moves to the rural country town of Inaba, he’s expecting a lot more peace and quiet than he’s been used to in the big city. Instead, the peace has been shattered as a rash of mysterious murders and kidnappings sweep the countryside. With the police stymied, Yu finds himself joining with a group of eight other teenagers in a desperate bid to solve the mystery. A mystery that is somehow connected to both the local weather patterns and a strange video game world which Yu, his friends and the enigmatic killer can all enter. Journey beyond the Velvet Room as the hit PlayStation 2™ game becomes a spectacular anime in PERSONA 4 the Animation!