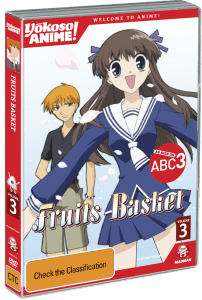 Starting in December 2012 and just in time for Christmas, the Australian anime publisher Madman Entertainment will be releasing select anime titles as part of Yokoso Anime Editions. As series are being aired on television stations including ABC3, they want to entice younger viewers to purchase the series they enjoy for a lesser price ($14.95 for 6-7ish episodes).

There were two titles in the inaugural batch of series: Ouran High School Host Club and a much earlier title ‘Fruits Basket’ for which I know several people who were introduced to the world of anime by the series. Fruits Basket is set to receive the third and fourth Yokoso Edition installments in January 2013, wrapping up the complete series that has recently been airing on ABC3.

As the one year anniversary of her mother’s death looms on the horizon, Tohru Honda is forced to take inventory of her life. Over the past 12 months she remained strong and focused despite her personal tragedy by becoming a valued member of the well known but mysterious Sohma household. But with the arrival of a new school year comes even more turmoil. Tohru soon discovers that the love and care she gives others is exactly what she needs in the most difficult time of her life.

To say that Tohru Honda’s life in the Sohma household has been difficult would be quite the understatement. She has learned to adapt to a constantly changing environment, to selflessly put others before herself, and to courageously face her own inner demons. But even despite all the trauma and heartache, Tohru will discover a reality far worse than any nightmare when she learns Kyo’s shocking inner secret. Tohru heads toward the crossroads of her fate. Which path she takes will determine how much she has truly learned about others… and herself.