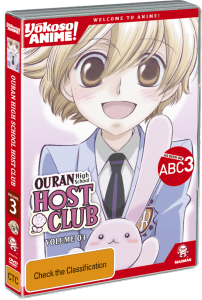 Starting in December 2012 and just in time for Christmas, the Australian anime publisher Madman Entertainment will be releasing select anime titles as part of Yokoso Anime Editions. As series are being aired on television stations including ABC3, they want to entice younger viewers to purchase the series they enjoy for a lesser price ($14.95 for 6-7ish episodes).

One of the inaugural series to receive this treatment is Ouran High School Host Club, for which the third and fourth installments are slated for release in January 2013 (The first two are set for release in December 2012). The third volume is set to include 7 episodes and features Honey on the cover while the fourth volume is to include 6 episodes and feature Kyoya on the cover.

The Newspaper Club is in bad shape, and the whole operation might fold if they don’t get a big story soon. The solution: an exclusive on the Host Club. It would definitely increase circulation, but thanks to the editor’s grudge against Tamaki, the guys could end up with some paper cuts.

Haruhi began the year as an out of place scholarship student, but she’s found new popularity as a member of the Host Club. Playing the part of a sensitive suitor and wooing the ladies of the school has become a full-time job. Of course, now that Tamaki and the other boys can no longer deny the charms of her girly side, life feels more like a storybook daydream.

But not all fairy tales have a happy ending. The King will have to choose between reality and fantasy – and his decision might force the Ouran Host Club to close their doors forever!