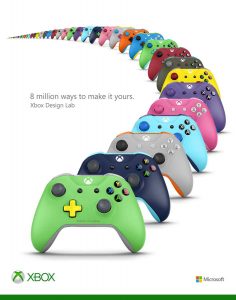 Outside of a few limited edition designs tied to specific console models and games, players have really been able to choose from a few limited colours when it comes to choosing their controller for a console. As someone who has gone through gaming with mostly black controllers, this is what I have come to expect from gaming companies… but Microsoft are set to change this.

The company have unveiled Xbox Design Lab, a new service which will allow players to create official Xbox Wireless Controllers with more than eight million colour variations to customise the controller, D-pad buttons and more. Each controller will then be handmade to order, and shipped directly to fans. It is currently unknown if developers/publishers will eventually collaborate with Microsoft to release specially branded design options for the Xbox Design Service. But nevertheless, it is great to see a company giving players and option to easily give their gaming collection some flair.

Xbox Design Lab is now open to players in the US, Canada and Puerto Rico. Additional regions will be supported in the future.

Take a look at some of the console possibilities below: