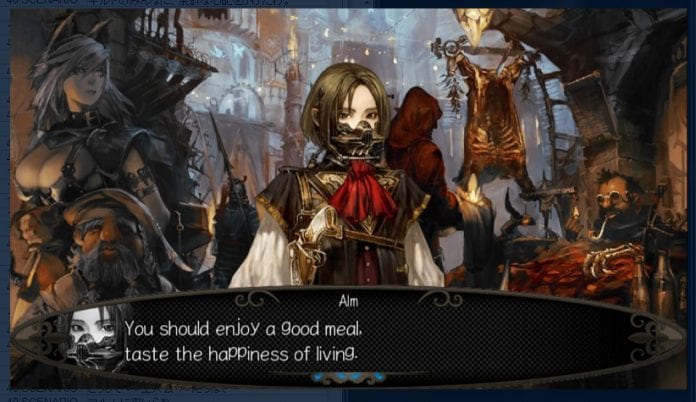 For the past few years, Nippon Ichi Software America have added an Experience Inc. developed dungeon-crawling RPG to their annual video game line-up. In 2014 we had Demon Gaze, which took players through a fantasy world on a quest to seal demons. In 2015 there was Operation Abyss: New Tokyo Legacy, which involved a more modern locale, and saw a spate of kidnappings turn into something much more dire and complex. Now in 2016… gamers have the opportunity to check out Stranger of Sword City on the PlayStation Vita.

Portable consoles are the dominant platform for games like this, and there are no shortage of them on the market. So does Stranger of Sword City maintain the quality that Experience has been known for? Keep reading to find out.

While there are named and story-centric characters present in Stranger of Sword City, you will not be locked into using specific characters. Instead, you take on the role of whia custom character whose name, appearance, class and skills are of your choosing. While this character is more or less mute during the entire narrative, their (or rather, your) decisions will have an impact on the outcome reached.

Stranger of Sword City begins with your character waking up as the sole survivor among the wreckage of a plane crash, which was the result of it being transported from Earth to the mysterious world of Escario. The world is teeming with monsters who won’t hesitate to kill any humanoid they come across, which results in almost immediate trouble for you. Ultimately rescued by a lady named Riu Tsukisada, the sub-leader of the Strangers Guild, it is discovered that you are what is considered a “Chosen One”. Few in number, Chosen Ones have the ability to defeat Lineage Monsters which prowl the lands and collect Blood Crystals. This sparks your journey through the menacing dungeons sprawled across the landscape of Escario, meeting its inhabitants, taking down dthat eadly foes and working to not only save the world, but find your way home.

Although it doesn’t play much of a role at first, a big element of the narrative is that there are three factions present in Escario – the Strangers Guild, the Kingdom and Medell Co. While your character is considered a member of the Strangers Guild, they are able to interact with and even support the members of other guilds. Most importantly is each respective leader, who are able to take Blood Crystals off your hands in return for “Divinity Skills” and furthering their individual goals (Which results in a diverging ending).

The storyline of Stranger of Sword City was decent, and delivered just enough to encourage me to continue playing through the often challenging dungeons. That being said, I wouldn’t have objected to something more complex and less scatted about. 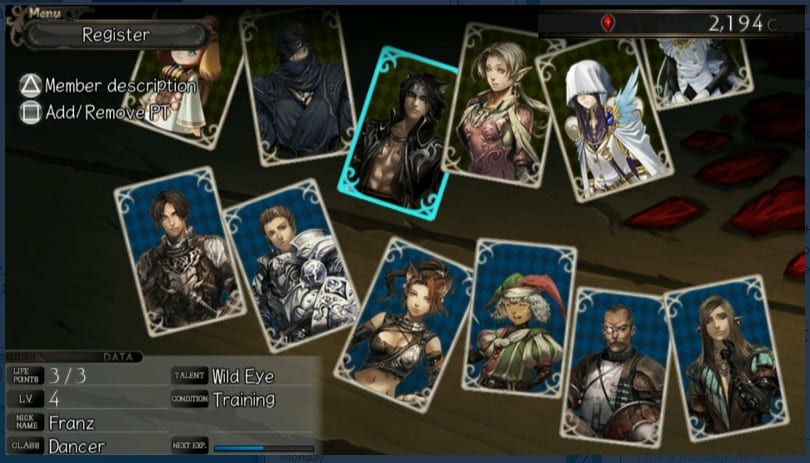 Stranger of Sword City offers two different NPC portrait styles, which will no doubt cater to different tastes. Presenting a traditional fantasy style of artwork, the first option features designs by Yoko Tsukamoto, which are darker and more realistic than the other choice. The alternative are designs by En Okishiji (Oxijiyen), which are more anime-inspired. Both options are good, and your choice will likely come down to personal preference. But personally, in keeping with the theme and style of the game, I chose Option 1.

There are also a range of player character designs to work with, offering many distinct options to craft your party with. But while there are many options which cover all five in-game races, some of the different art styles didn’t complement one another so well. I do look forward to the PC release and its “Picture Gate” feature -that will allow players to add their own character portraits to the game. Anyone else ready to guide the Prinny Squad on a deadly quest to save the world?

The approach to dungeon designs haven’t changed much since Demon Gaze, other than the obvious style choices. Each dungeon is expansive, offers its own range of distinct enemies which suit the locale and has its own set of tricks and traps to catch unalert players off-guard. For example, one dungeon might have an enemy which can snipe you from afar until it is defeated, while another has paths that close themselves behind you.

Stranger of Sword City only has the original Japanese dub, with no new English voice acting commissioned for the title. While there are many unvoiced lines in the game, what’s presented is solid overall. Just don’t expect much from the various grunts you will hear from your party mid-dungeon. 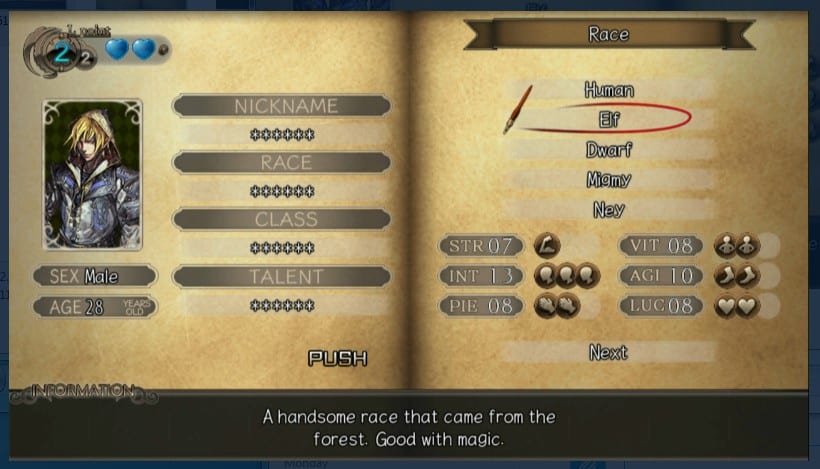 One of the first things you will do when beginning to play Stranger of Sword City is dive into its character creation system. In total you are able to create 16 characters, of which six will join your party. Some of the options such as voice, name and nickname have minimal affect on the gameplay, however there are options you will need to consider immediately to get the most out of each character.

First of all is character age, where you can have anyone from a child to elderly person become a member of your party. This is not just some unimportant value, as younger characters have more life points (Which helps prevent them from vanishing permanently when defeated in battle) and older characters have more bonus stat points to assign freely to characters. It really comes down to whether or not you want to start out stronger or want to stockpile lives incase a worst-case scenario occurs.  Especially if you are new to dungeon crawling RPG’s, I recommend taking the hit in stats and making your characters younger.

Each of the five character races (Human, Elf, Dwarf, Migmy and Ney) also have different stats associated with them, making each better suited to different classes. I recommend just choosing a race best suited to your character’s class, as there are no restrictions on the use of portrait designs or pretty much anything else. Finally there are talents, which can be used to give characters a specialised skill in and out of battle.

As with almost all dungeon-crawling RPG’s, the composition of classes in your party can mean the difference between life and death. In total there are eight classes offered in Stranger of Sword City, each having justifiable roles in battle. These include the front-row physical attackers (Fighter, Knight, Samurai), back-row magic users (Wizard, Cleric), ranged weapon users (Ranger) and more advanced speciality classes (Ninja, Dancer). There isn’t that much differing one Cleric from another for example, but there is a steady stream of skills and boosts which unlock as each character’s level increases.

In all, the character creation and character building systems in Stranger of Sword City are both sufficient and straightforward to use. 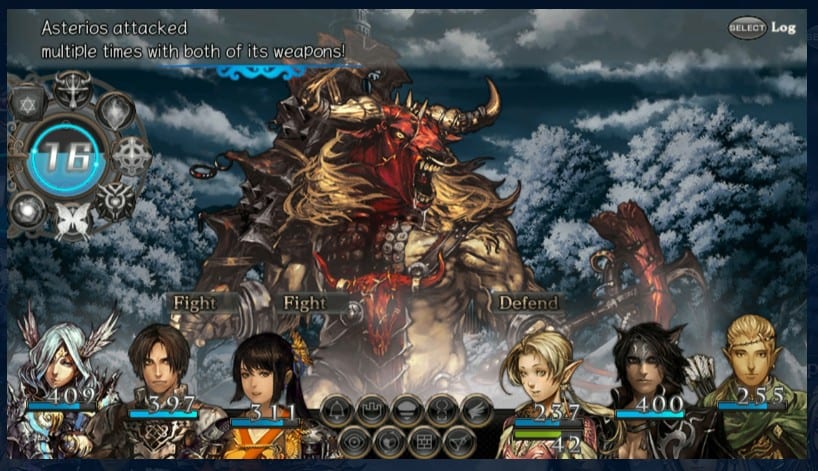 The dungeon crawling elements in Stranger of Sword City are comparable to many other similar games. Using a first-person viewpoint, players must navigate their way through an extensive labyrinth; defeating enemies, avoiding hidden traps and completing pre-determined objectives.

Like its predecessors, the game features many hidden nooks which only investigating nondescript walls can uncover. Given that these hidden areas are routinely required to overcome a locked door or uncover a key landmark, you can spend a lot of time investigating a portion of the dungeon until you find it. While it prevents players from ploughing through an area, it can leave you facing many extra battles, resulting in your party becoming weaker and unable to progress any further. Granted it is possible to leave an area to heal up back at base, all enemies will resurrect at that time. Therefore, dungeon navigation can come down to balancing the need to keep your party alive against the time it takes to backtrack and return.

One of the new features introduced in Stranger of Sword City is hiding, which is a key means of acquiring powerful and potentially unique (exclusive) weaponry/armory. Certain sections of each labyrinth are labelled as ambush zones, which can be utilised by using a portion of the party’s Morale Gauge (Gradually replenishable during battle). By hiding in a location, you will come across stronger than average foes. By defeating the leader of a group before it flees, the party can claim a treasure chest which is filled with rarer items.

For those after a challenge experience, the title will be up your alley. Given how long treks in labyrinths can be before coming across a warp zone, battles come down to managing your health and magic points so you have enough remaining to handle a potential Lineage Monster or surprise attack. But doing so doesn’t come easy when monsters on the field can be much higher levelled than your party. There are also occasions when your party could be massacred by an innocent looking group of enemies – an occasional spike in difficulty which isn’t all that welcome. However, the continually increasing difficulty is a main draw of Stranger of Sword City in my opinion, given that the battle system itself pretty much works on a standard turn-based system.

This is not to say the battle system is generic. One nifty addition to the battle system are Divinity Skills, which allow you to use morale to perform special abilities. Especially since players are pitted against some deadly foes lower level parties might be hard pressed to escape from, it was a relief that the first unlocked skill was “Flash Retreat”, granting a 100% chance of escape from most enemies. Other skills provide stat boosts or the performance of special attacks. These occasional-use skills are great for getting out of a bind, especially ones where you need to act fast or flee prior to a bloodbath. Each of these skills are unlocked by handing over Blood Crystals to a guild leader, with each guild offering a slightly different assortment of skills. 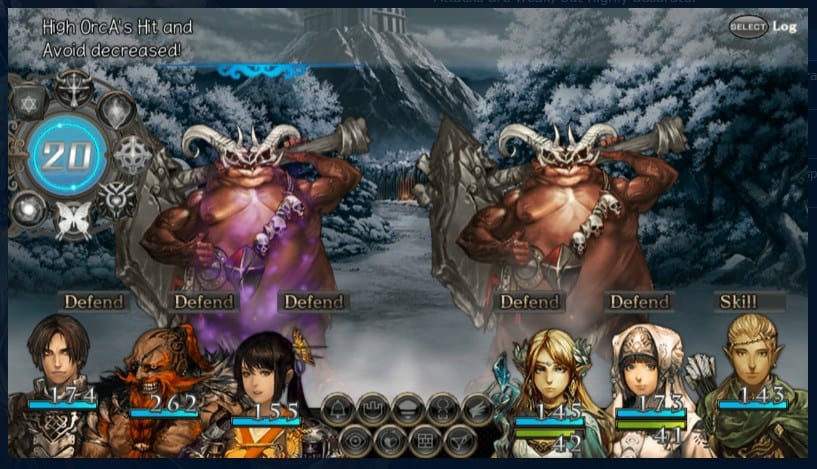 Knowing when to retreat from battle is also critical, as party members can vanish permanently – especially when their life points hit zero. There is nothing more frustrating than having to spend hours re-levelling a new party member because someone you crafted upon starting the game kicked the bucket. Of course, for those who don’t mind potentially losing an hour or so of levelling, it is possible to just reload a save file. To restate what I mentioned above, I recommend that anyone new to the genre forgoes the stat boost and creates characters which are younger rather than old. Surprisingly in terms of the harshness of battle, it is much easier to keep a group of ten year olds in a party for the entire game compared to a group of seasoned veterans. At least from my experience.

Stranger of Sword City might be slow at times, especially considering how long it takes to level characters up and the challenges which awaits players in each labyrinth. But for persevering, players are treated to an experience which requires them to be ready for anything, and provides a sense of accomplishment every time you take down an unyielding enemy.

Experience have developed many high quality dungeon-crawling RPG’s over the years, and Stranger of Sword City is no exception. It might not have the charm of Demon Gaze or the design versatility of Operation Abyss: New Tokyo Legacy – but what it offers is a strong all-round experience. I found myself continually challenged, and really enjoyed working my way through the labyrinths on offer.

A digital PlayStation Vita copy of Stranger of Sword City was provided by Nippon Ichi Software America for the purpose of this review. 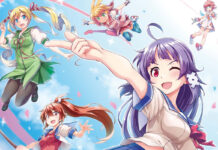 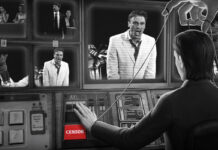 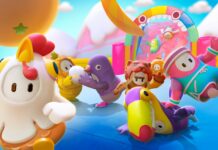