I am studying a review/critiquing subject at University this semester, and for a 20% chunk of the grade, I had to read out a review in-front of my peers for their critique and eventual grading by the tutor. While not the first video game review presented to the class in weeks prior, the others were for more mainstream titles including Destiny and Assassin’s Creed IV: Black Flag. Therefore I decided to spice things up a bit with the niche game review for The Stanley Parable.

I already had the pleasure of reviewing The Stanley Parable last year, for which it walked away with a score of B+. Following the regulations I set myself for this site, this review will not trump the one I wrote back in October 2013. However rather than having the review sit on my computer indefinitely – feel free to read it yourself! I will have more reviews that I have written up for assignments very soon… mostly for titles never reviewed on this site. Unfortunately a month has passed and results still haven’t been posted up, and the last thing I want to do is be pulled up in-front of an academic integrity inquiry for plagiarizing my own work. 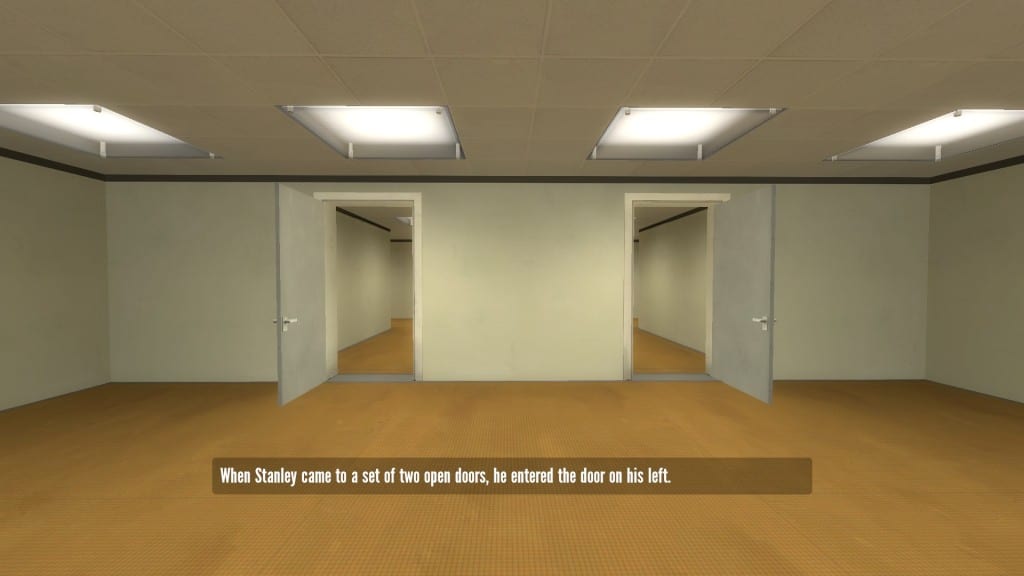 Originally beginning as an ambitious player-created mod for Half Life 2 back in 2011, The Stanley Parable caught the attention of gamers for its unique approach to non-linear storytelling, which unlike some other games nowadays, was not sacrificed for the sake of gameplay or pretty visuals. This accolade was no insignificant feat considering most of the game simply involved walking down nondescript office corridors. In response to the cult following they have achieved since then, developer Galactic Café last year released a HD remake on Steam, bringing new storyline options, more witty banter and other improvements across the board.

The Stanley Parable follows a man named Stanley, who works for a big company as employee #427. His job is simple… he just sits at a desk and pushes buttons on a keyboard as orders come through. To most this would be considered a soul-rendering job, however Stanley finds his work fulfilling and is happily content with his life. However when all his co-workers disappear, he decides to go and search for them… unveiling a big secret that will change his life forever.

This is at least what the introductory narration purports the game to be about, and if you follow all directions presented to you while playing, then that is the tale you will be told during your playthrough. But that is only one of eighteen possible endings to unlock. The Stanley Parable instead shines when an all-out war between the Narrator (Voiced by British voice-actor Kevan Brighting) and the player kicks off, as you work towards going against his will and the desired linear plot. 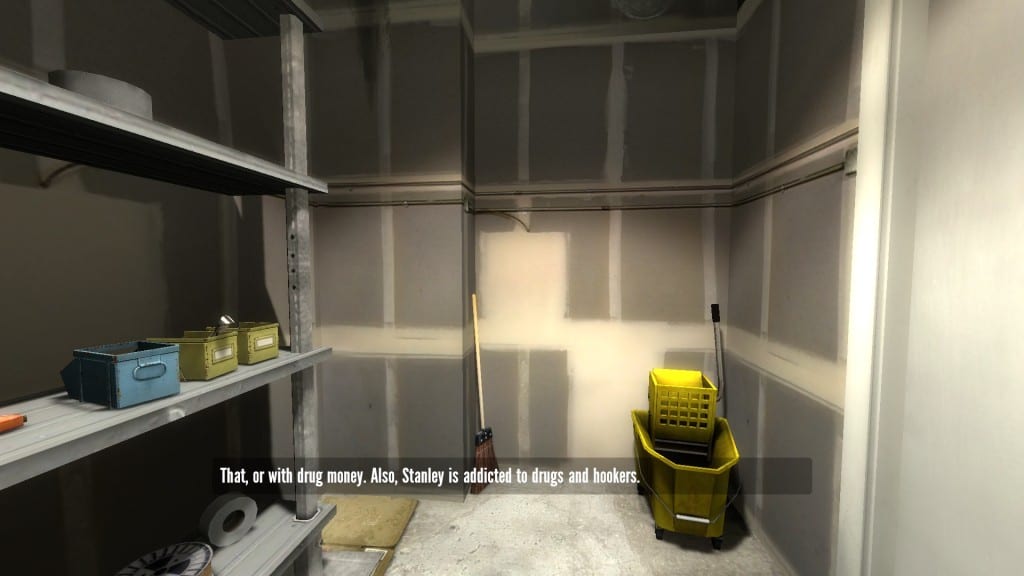 Everything begins when the player is presented with a choice of two doors, with the omnipresent narrator bellowing “When Stanley came to a set of two open doors, he entered the door on his left”. You can follow his instructions or choose the door on the right, leading to a whole new route with its own unique events and endings. Many video games give an impression of offering a choice when it comes to dialogue options, but these often have no immediate impact on the plot or result in a single line of dialogue changed. The Stanley Parable on the other hand provides meaningful choices, where every decision you make has a direct impact on the progression of events.

Dare you go into the ominous room filled with hundreds of monitors the narrator goads you towards or deviate into the eerie corridor marked “Escape”? Will you answer the phone-call from “her”? Are you up for four hours of repetitive button pressing to unlock a hidden ending? Every option, no matter how tedious or impossible is catered to, even when you go out of your way to break or cheat the game. While every playthrough can take between one and twenty minutes, its replayability is many times greater through the many different paths to work towards, not all of which are obvious at first glance.

The greatest asset to The Stanley Parable however is Kevan Brighting as the narrator, who has earned himself a significant legion of fans and other in-character voice roles since starring as the character in 2011. Starting off with a charming yet forceful voice that directs Stanley through the storyline, his emotions shift dependant on your actions in an attempt to salvage the story. Fourth-wall breaking, insult-flinging and editing the game world are all elements in his repertoire of responses as he becomes increasingly cynical and frustrated at your actions. It is hard to place the narrator’s actual role in the game, as it differs depending on the route you have taken. Sometimes he is an antagonist, sometimes he is simply a narrator and other times he is a victim to the story himself. But ultimately he is a personification of narrative design in gaming, who is struggling to get the intended storyline across to a player who is given more freedom than usual to deviate from the intended plot. 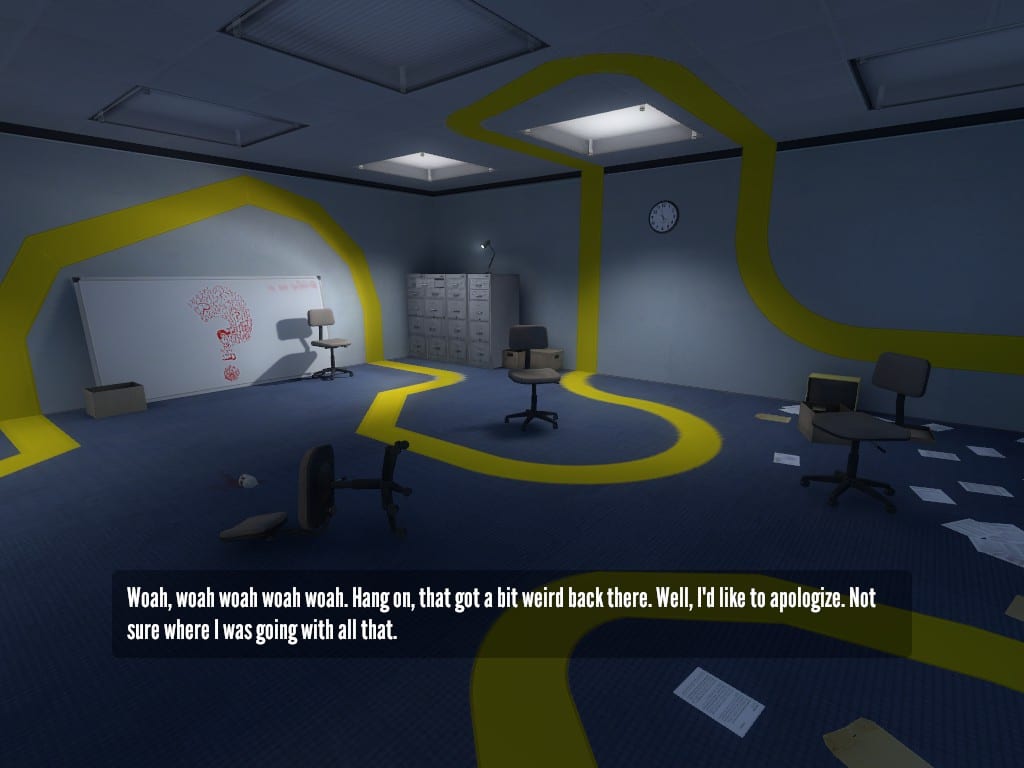 A majority of the changes made in The Stanley Parable HD were in relation to the storyline, with previous routes extended and more than half of them being brand new – including two introduced based on legitimate bugs encountered in its predecessor. Another noticeable change was the development team using the same Source Engine version used for Valve’s Portal 2. This resulted in not only a more aesthetically pleasing game, but also allowed the development team to throw in a few surprises that I will leave you to discover for yourself.

The Stanley Parable didn’t need any gameplay to deliver an enjoyable gaming experience, with a well-written storyline and a narrator who’s as easy to fall in love with as Portal’s GLaDOS, providing more than enough substance for the $14.99 USD price point. It is clear from the first run-through that the development team produced this HD remake as a labour of love, with its already quirky plot riddled with Easter Eggs, vague references and hidden bonuses that is difficult to find in the gaming industry nowadays. But don’t just take my word for it – open your Steam client right now, search The Stanley Parable and download its demo – featuring a unique storyline that highlights just how much effort was put into this remake.