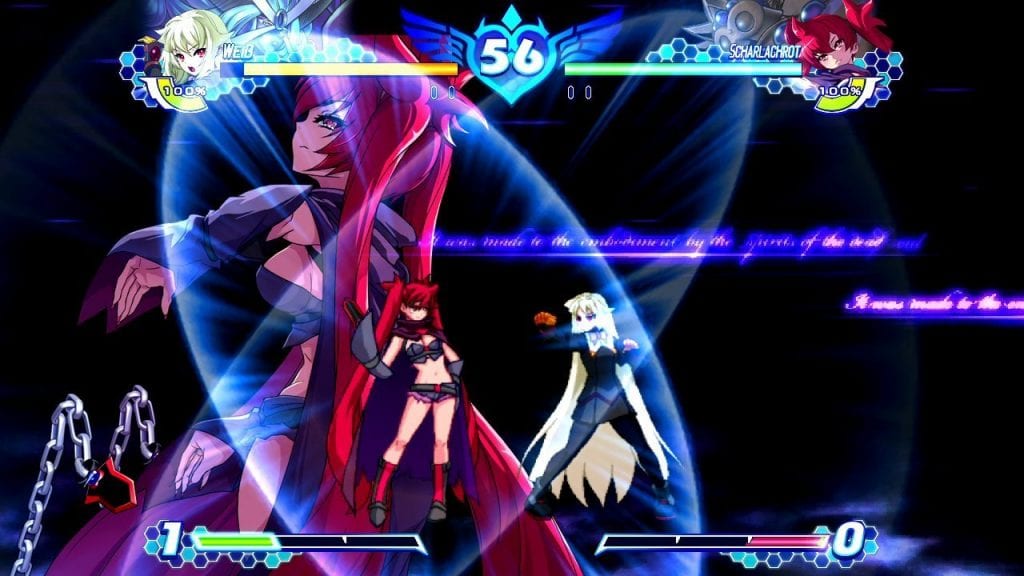 With both Arcana Heart 3: Love Max!!!!! and Persona 4 Arena Ultimax being released this month by Aksys Games and ATLUS USA respectively, gamers are being spoilt for choice when it comes to fighting games in North America. First out of the gates is Arcana Heart 3: Love Max!!!!! which launched on the PlayStation 3 and PlayStation Vita earlier this week. As the visuals and developer would imply, Arcana Heart 3: Love Max!!!!! is a traditional 2D fighting game adapted from the of the original 2013 Arcade game which was itself an updated version of its 2009 predecessor. Unfortunately I cannot say too much about any improvements myself given that no other instalment in the franchise has made its way over here in Australia. But purportedly the additions include significantly rebalanced gameplay and a number of other gameplay and non-gameplay features.

The biggest issue with the game’s storyline is that if you have never played an Arcana Heart title before, you will likely be left confused with little idea on what is happening. A more detailed refresher on all characters and events would have been welcome. Similar to Persona 4 Arena, individual storylines are provided for all 23 characters, covering the same general event only with your chosen character taking the lead and different fights taking place. Unlike the fascinating characters and distinct stories of BlazBlue or Persona 4 Arena however…. playing through more than a couple of the 20-minute plots came across as little more than a tedious exercise.

The only justification for using each character through their respective story and in battle was to unlock one of the multiple substories for each of them, helping develop their personality separate of the fighting. The characters themselves are fairly interesting and diverse – ranging from a young girl who can summon a drawing monster to a number of ladies who could be considered the embodiment of several different “stereotypical” anime heroines. The console release also includes an “After Story” mode, which puts more emphasis on the plot and characters rather than the fighting. 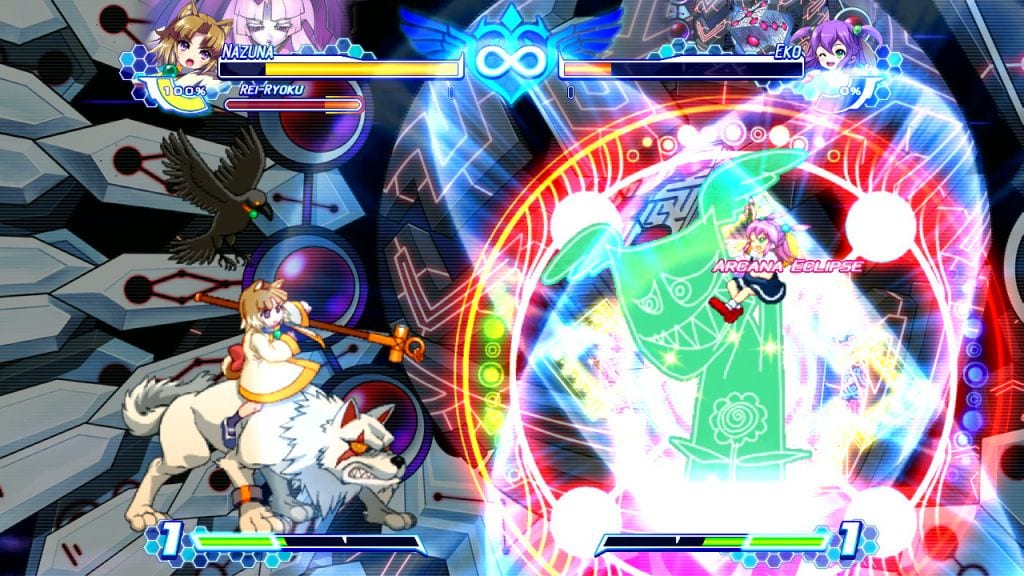 Like many of the “traditional-looking” fighting games, Arcana Heart 3: Love Max!!!!! features fantastic 2D visuals, with every character looking distinct from one another and fighting backdrops that complement the intended aesthetic appeal well. The sprite artwork for each character was close to perfect, with all 23 fighters having visibly unique fighting styles and stances. The designs were not flawless however, with the half-assed integration of something that could have been significantly better than it was. During battles, animated character portraits (Link Animations) appear to the side of the screen during fights.  It would have been a great idea if there weren’t only a severely limited number of different animations that at times don’t remotely correlate to what is happening in the brawl.

Aksys Games chose not to dub Arcana Heart 3: Love Max!!!!!, instead opting to retain the original Japanese voice-overs. While some elements of the game don’t have dubbing at all, a majority of the lines are dubbed, and are competently performed by the Japanese voice cast. 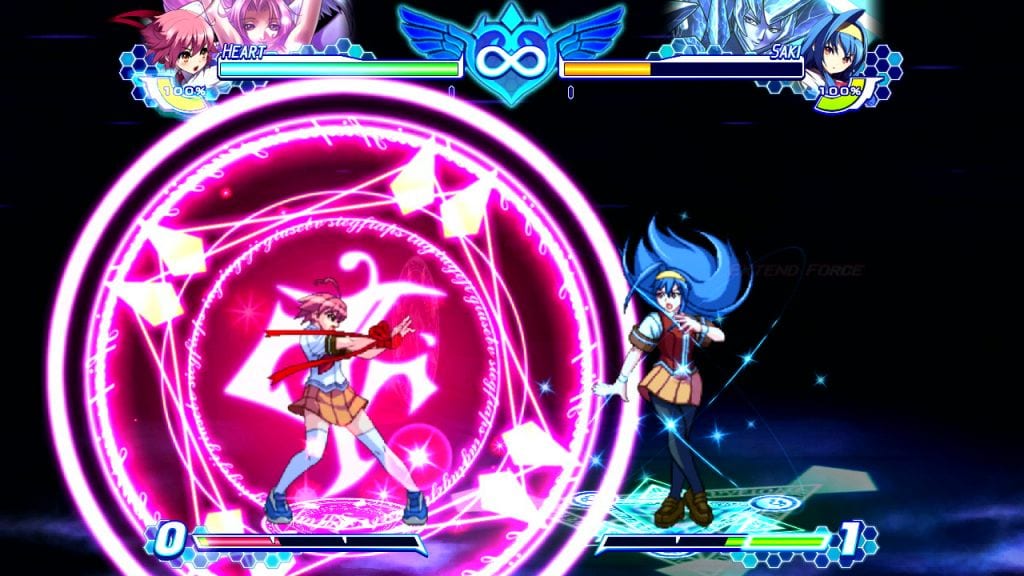 Battles in Arcana Heart 3: Love Max!!!!! involve 1 versus 1 brawls with no “tag team” elements. Despite this, players are able to customize their experience by being able to choose from an additional set of 23 arcana which provide their chosen character with special attack moves depending on which one they select. Each character is associated with a particular Arcana, but you can mix and match depending on the control setting and game mode you have selected.

The fights themselves are split over two different control types depending on your own abilities. The first is “Simple Mode” where you are tied to specific Character/Arcana combinations but have combo sets associated with each button press rather than having to navigate complex combos yourself. Evidently this is aimed at beginners, however at higher difficulty settings can still provide a decent challenge without being game-breakingly easy. The second mode is, of course, “Classic Mode” which requires players to map out their own combo chains BUT with the bonus of being able to choose their own Arcana for around 500 different character/arcana combinations. Irrespective of what you choose, the battles are usually fast paced and enjoyable – with each character feeling distinct rather than the same character copied and pasted twenty times.

Aside from the story-oriented modes, Arcana Heart 3: Love Max!!!!! also comes with a handful of additional single and multiplayer options including “Survival Score Attack” where you fight all characters on the roster to aim towards a high score, “Trial” where you are given specific objectives to complete during a battle (Eg. Do jump attacks 15 times), “Time Attack” which requires you to battle against other characters as quickly as possible and “Versus/PSN” modes for offline and online battles. The usual assortment of features you would expect to find in any 2D fighting game like this. 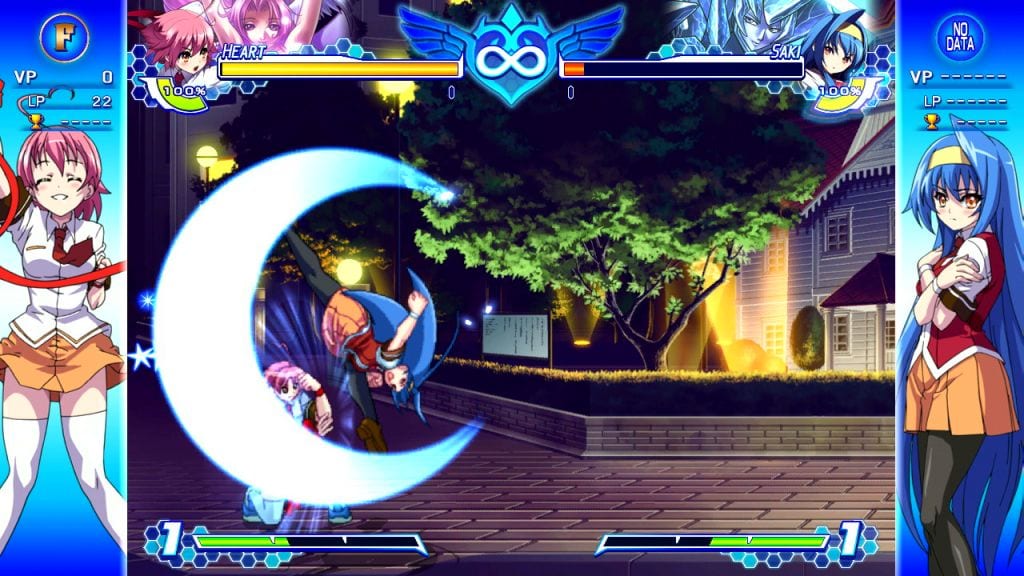 While its storyline left much to be desired after the first couple of playthroughs, Arcana Heart 3: Love Max!!!!! provided an overall competent fighting experience that should appeal to fans of the genre – catering towards both single-player and online play. Despite bringing a particular “cute anime girls” charm and offering flexible character customization through the Arcana system, these features alone wern’t enough to make it stand out from the more notable fighting games on the market in recent years, including Arc’s own Blazblue and Persona 4 Arena franchises.