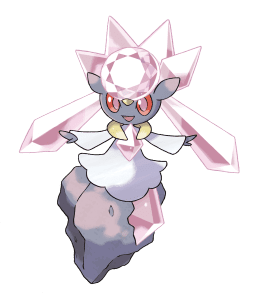 With Pokemon X and Y now out to market and the TV anime series for it currently ongoing (and no doubt a tonne of movies tied-in with them), The Pokemon Company International have shared details on the Rock and Fairy type Pokemon Diancie.

Diancie is an extremely rare Mythical Pokémon, a special Pokémon that cannot be found during normal gameplay. Known to boast the greatest beauty in all the world, Diancie’s body glitters pink, captivating the hearts of many. During battle, Diancie can produce a great volume of diamonds instantaneously by compressing air between its hands. It uses these diamonds to attack enemies and protect itself.

While it is unknown just how gamers can get their hands on this new legendary Pokemon, either by Mystery Gift or promotional event, The Pokemon Company International have confirmed that they will be sharing details on this sooner or later. Until then, we have been given a look at Diancie through the above trailer and a handful of screenshots below.