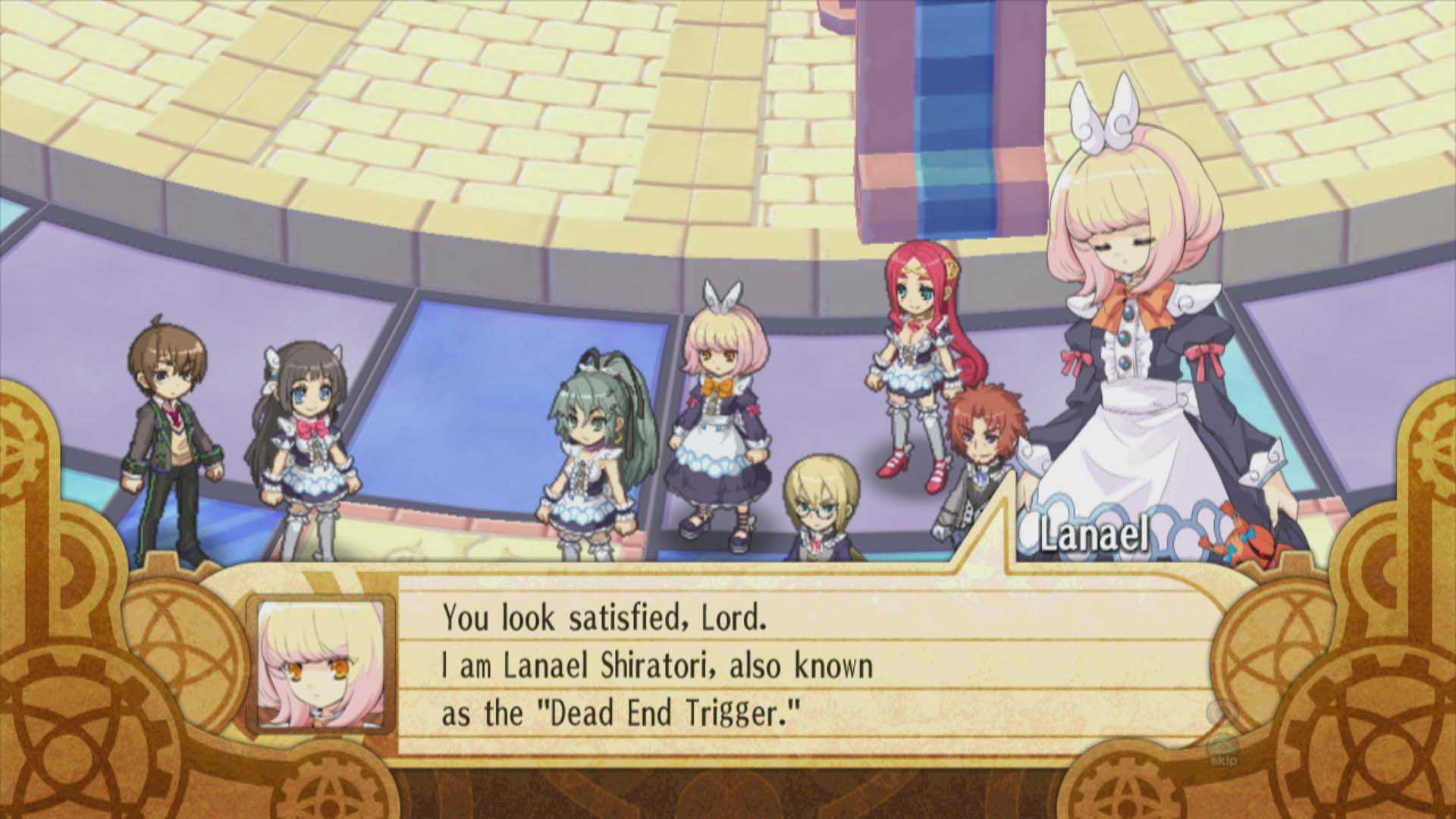 Nippon Ichi Software has been known for their Makai Senki Disgaea franchise, and while their interests have primarily remained in the RPG / Tactical RPG market for many years now they have occasionally diversified the formula to deliver alternate experiences that have been relatively well received. The Playstation Portable in particular has played a major role in this, with titles such as Prinny: Can I Really Be the Hero? and in particular Zettai Hero Project drawing upon the studios eccentric approach to game design and storytelling well and standing out from the market.

While never being deemed worthy of reaching Australia and New Zealand, Zettai Hero Project seems to have drawn enough attention to warrant a spiritual successor in the form of The Guided Fate Paradox (Also known as Kamisama to Unmei Kakumei no Paradox). This has just this week been launched in PAL regions with a North American slate for mid-next week. Featuring similar albeit enhanced roguelike dungeon-crawling tactical-RPG mechanics, does this successor live up to the expectations of its predecessor? Read on to find out!

The Guided Fate Paradox focuses on your typical male High Schooler protagonist Renya Kagurazaka who is pretty average across the board WITH the exception of his bad luck in winning prizes – specifically the shopping mall lotteries that are commonplace in Japan. Despite not having won so much as a tissue packet his entire life, he is egged on by a mysterious girl in a maid uniform to try his luck with a ticket he had just acquired. To his surprise he wins the top prize, but it isn’t a hot springs trip or a fancy television or something like that…. but ascension into becoming a god. While his new-found title could have diverged down any number of storyline paths, his role as God is now to grant wishes with the assistance of the angels that reside in Celestia.

Renya grants these wishes using the ‘Fate Revolution Circuit’ and jumping between the “original world” which allows him to more directly interact with the characters and the “copy world” which only shows him the bare minimum of detail but is where his actions can guide the wishers desires to the right path. With many millions of potential wishes made every day, they could have worked with pretty much anything, but instead the development team at Nippon Ichi Software chose to be creative. The first world for example is based on the fairy tale “Cinderella”, where after enduring the same story time and time again each time it is read, she wants to break out of what she feels to be a shallow experience. Therefore in this instance it is up to Renya to lead Cinderella away from the cliche “Happily Ever After”. 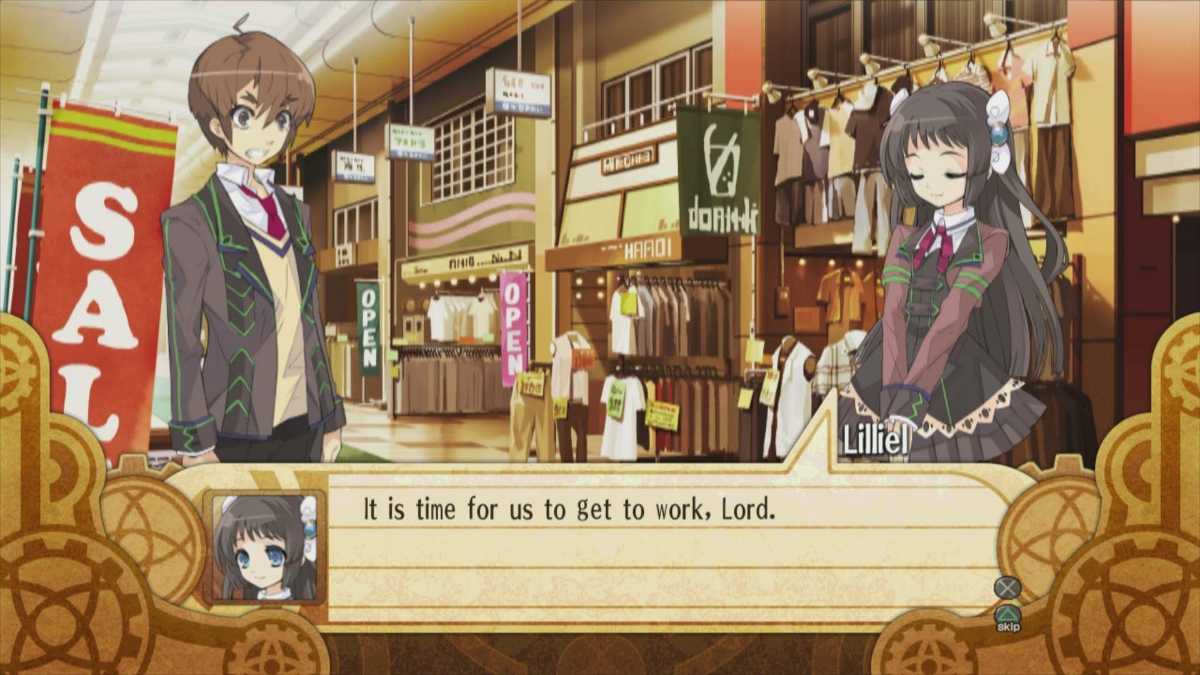 The game is not just built upon these wishes, also offering additional storylines through the angels themselves. While initially you are left in control of Renya and the newest angel Liliel who still needs to refer to her guidebook as an Angel, it is soon uncovered to the player at least that not is all as it seems. Each of the angels hide their own personal secrets, allegiances and from the get-go they indicate to the viewer that there is a bigger scheme involved in the God system.

For what they were trying to deliver, individual chapters built around separate wishes, The Guided Fate Paradox meets expectations in that regard. However the game lacks the comical charm of the Disgaea franchise, and its attempts to be eccentric and random sometimes came across as unforgettable. But fortunately its strongest moments were when they focused more on the storyline at hand more seriously and then worked their quirky humor into it. While the start and end of each wish are usually a major affair and capped off with a boss fight, the storyline is often broken up into tiny snippets shown after the completion of each level. While this worked given that it is very easy to wind up back at Lvl 1 without any equipment in the game and therefore rewarded progress for making it to the next stage, sometimes it felt that the storyline being delivered would have been better off compiled and shown less frequently.

Asides from these qualms, the storyline of The Guided Fate Paradox isn’t too different from what one would expect from a Nippon Ichi Software title. 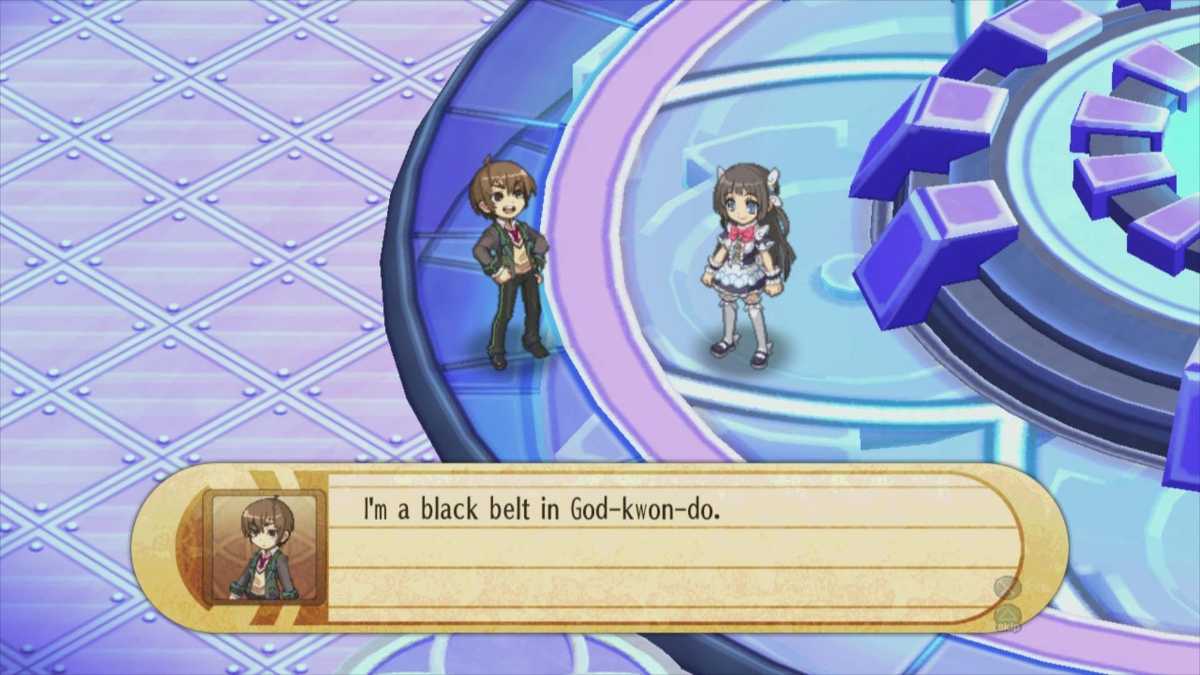 Back when they released Disgaea 4, Nippon Ichi Software took to improving the quality of their character sprites in order to make them more current-generation. While the visual quality is enhanced in comparison to that of earlier Disgaea titles, the character sprite deisgns are not up to the standards of their more recent titles – keeping the style that was present in Zettai Hero Project. Some of the design decisions from Disgaea D2 such as character sprites as character portraits in standard dialogue (As pictured above) also make a return. But other than that the character sprites are responsive during the dialogue and are by no means static, with the remainder of the dialogue and conversations being played out through the standard visual novel style system without lip syncing but blinking and a variety of facial expressions.

One of the main charms of The Guided Fate Paradox however is the character designs, produced by acclaimed Japanese artist Noizi Ito who has had roles in a number of visual novels (Nanatsuiro Drops, Alice Parade etc) and the role of character designer and artist for both Shakugan no Shana and Haruhi Suzumiya novels.

While there are only a handful of them in the entire game, the lyrical music tracks in The Guided Fate Paradox are fast paced, intense tracks that emphasize the intensity of the (often) boss fight they are used in, as well as drawing in the gamers attention with the opening track “Kami, Nozomu Sekai to Hakinowa Gensou” performed by Yousei Teikoku. It was quite easily one of my favorite NIS openings to date. The remainder of the musical backing in the game remains strong, with the exception of a few standard stage tracks which tire quickly.

As usual you are given the standard Hybrid Dub option in this game, and can choose either English or Japanese voices to play through the game with. Given the number of voice roles that were present in the game, they did a suitable job of selecting the right VA to each character, but there were no memorable roles to be found. Many of the important scenes were dubbed, however minor scenes were text-only.

As with many rogue-like tactical RPG’s you are not given a party of characters to select from each round and go from there, but rather are in control of one set character (Renya) in addition to one NPC Angel and that is pretty much it. From a third-person perspective you navigate through the labyrinth of randomly generated dungeons seeking out the portal to the next area, and progress from there. Obviously, surrounding them on the field are solo-group enemies that actively walk around the stage and will show hostility once entering their range of view. This isn’t too different from the genre, but it is all the little features they have added to it which build the challenge and give you the control to determine if you survive or surrender during a jaunt in the Fate Revolution Circuit.

While Renya may not be deemed a “God”, his abilities does not make him invulnerable to enemy attacks as one might expect from the title. Instead, he begins every trip into the Fate Revolution Circuit at Lv 1. In order to obtain powers he must do what every character in a tactical RPG must do – take out the enemies, gain experience and increase stats through leveling up. While this doesn’t have too much of an impact in the earlier levels, as you progress foes on the maps start out stronger requiring better initial equipment and better tactics. However Renya’s base stats don’t remain static during the entire game, and upon either completing or dying in a level his end level gets added to another level total which slightly boosts his stats in future dungeons.

In terms of equipment, the game offers a vast variety of weapons, armor and accessories that can be visually placed on Renya’s person whenever he goes into a dungeon. Every piece of equipment equipped on either him or an angel includes a unique skill which can be used while on the field provided they have enough SP. These weapons can be enhanced through using them on the field (“Bursting” them) then subsequently upgrading them for a cost, and offer enough variety throughout the game to offer strategic benefit without feeling you are either left without good equipment or the skills associated with them. This is a good thing, because if you hit “Game Over” not only is your level reset but your gold tally is cut in half and you lose all carried and equipped items. The benefit of having this system in place is questionable, as there is no penalty for someone to just go back to the main menu and load up their save file with all items intact. But at the very least it is possible to say that whether it is sexy jiggly boobs, tank feet or drill hands, the equipment variety is there!

One of the systems that has carried over from Zettai Hero Project is the body modification system, which is now known as the Divinigram. Whenever you use equipment to the point they are “bursted”, while they are weakened until you enhance them again you obtain holy icons which can be placed on the board to improve the stats of Renya and improve his title from God Trainee. While I found the system giving me almost nothing but Attack icons, it does in theory grant you some control over your characters development. Additional icons known as Artifacts can be acquired and used to further enhance Renya’s capability beyond stats – such as attacking twice or boosting the effectiveness of icons on a particular path of the Divinigram.

When you couple all these systems and others revealed over the course of the game, they provide a number of ways to improve the chances of Renya and his chosen angel companion reaching the end of a dungeon intact. However, especially if you don’t reset the game every time you reach a Game Over, there is still some grinding required throughout the game to be able to effectively tackle some of the dungeon end bosses. Even then given the leveling system mechanics, attempts to overpower your characters unlike other tactical RPG’s still may not lead to an easy experience.

The Guided Fate Paradox built effectively upon what Zettai Hero Project started three years ago. It delivered some new ideas to its core gameplay system and ended up being an enjoyable yet challenging roguelike dungeon crawling RPG experience. While nothing yet has managed to break the Disgaea franchise for the NIS top spot yet…. this style of gameplay system is one I hope the company continues playing around with further.