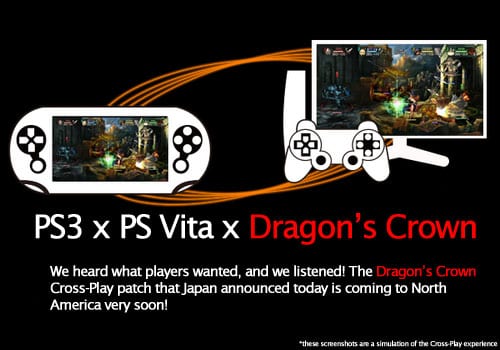 While it may have been considered a “current” printing error on PAL region copies of Dragon’s Crown, it has been today confirmed by Vanillaware / ATLUS USA that the game will be receiving cross-play functionality between PS3 and PS Vita copies of the game in the near future.

This is what they had to say in an announcement sent off this morning:

[signoff icon=”icon-alert”]Since launch, we’ve been hearing from our fans how much they wanted Cross-Play in Dragon’s Crown. Vanillaware was focused on delivering the best game possible, so we couldn’t include it at launch, but we’ve been supporting the title ever since! Now, we’re stoked to tell you that Cross-Play is on its way to North America, and the update will be arriving very soon. Stay tuned for more details! Good thing Dragon’s Crown is on sale this week for $10 off! [/signoff]

Closely following the airing of The World Ends with You's first anime episode in Japan, Square Enix has come out to announce that the...
Read more
Video Games

Next week, Warriors of Light on North American, European and Japanese servers will be able to commence new journeys in Eorzea and beyond through...
Read more
Video Games

Whether you are in the camp that believes the ambitious space-simulation game Star Citizen will be delivered with all promised features, never see the...
Read more