I think for many gamers there is a point in their gaming lives where they have a spark or an idea that they feel could extend them from being the end-user into an integral component of the video game industry – as a developer, a publisher, a creator. I myself had that mindset many times, however while some go forward and become successful most of us end up moving on with our daily lives and remain an appreciator of an ever growing industry filled with new and innovative ideas. The team at Greenheart Games on the other hand have made their idea into reality… an idea that at the very least gives others a chance at realizing their dream as a game developer if only limited to a simulated world.

Game Dev Tycoon puts you in the shoes of a new developer who sees the potential for the video game industry in its founding years (or they are just bored – they never really explain). Equipped with only a garage studio, a trusty computer and the capabilities to produce text-based and simple 2D games – her/she begins their journey to form a highly successful development studio right up the next-next generation of consoles. 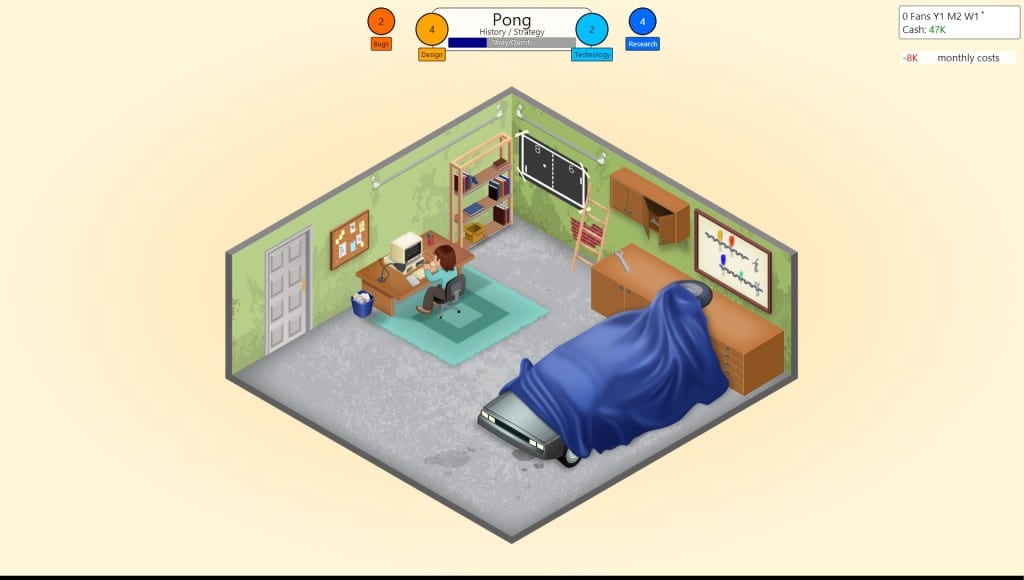 The storyline to Game Dev Story is rather hands-off and never constricts you to one particular path. Instead throughout the 35 (Standard Game) year journey you are nudged on your way with prompts to purchase the next office tier, occasional random events and the release of a brand new console or the market (or the inevitable death of one). As with most tycoon games, the prompts are just there to give you guidance, and leaves you to forge your own path to success or bankruptcy.

Using the very beginning of the game as a starting point, to develop the game you are given access to a streamlined set of options – allowing you to choose the title, topic (Space, Spy, Music), genre (RPG, Simulation, Action) and the console you will be developing for. Eventually research options are unlocked to provide a greater range of topics/genres, age brackets, MMO capabilities, custom game engines and more – but they still give the core basics to work with at the start. 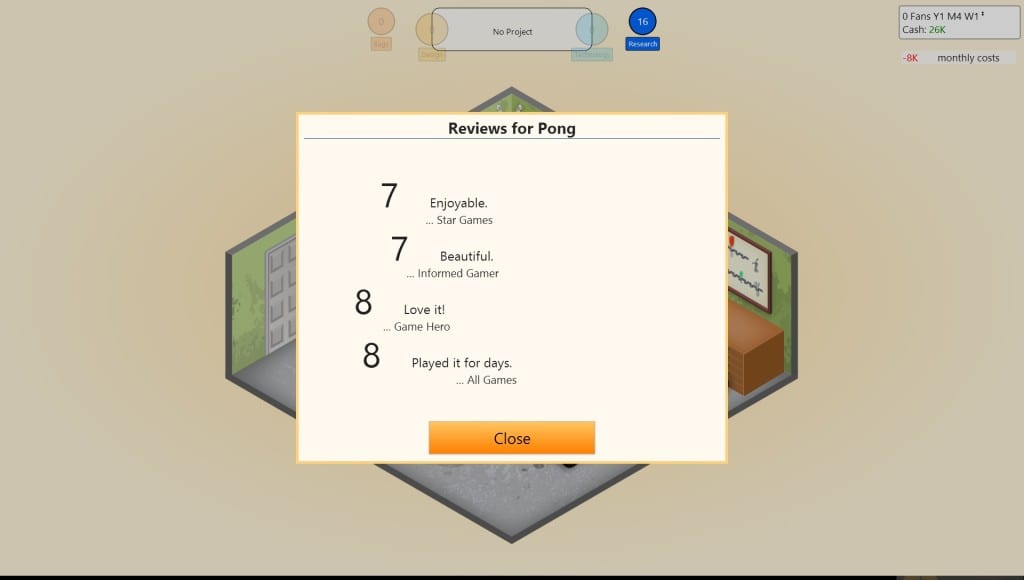 Development of a game is split up into a number of phases, each involving three time sliders that determines how your limited time to develop the game will be distributed. Assumingly due to logistics you cannot extend the time you have to develop the games, but instead it leaves you to ask the question (for example) if it is best to equally spread out the time between all three categories presented or focus on one in particular. Depending on the topic / genre, this changes between titles and the best distribution is not always obvious, although researching the game post-production leads to some hints.

During the development sessions, bubbles will flow from your character into four different headings – “Design” and “Technology” which determine how the end product will be, “Bugs” which will require extra development time dedicated to ironing them out and finally “Research” points which can be later used to research new technology / topics or train your character / employees in a field. Once released to market, you get given a score which more or less equates to how much money you will get from the title. The end result comes down to not only how many points you acquired but the console, genre and topic matches which means even breaking your records for Design and Technology can still get you below average scores. In this regard the automated video game reviewers can serve as both friend and antagonist. 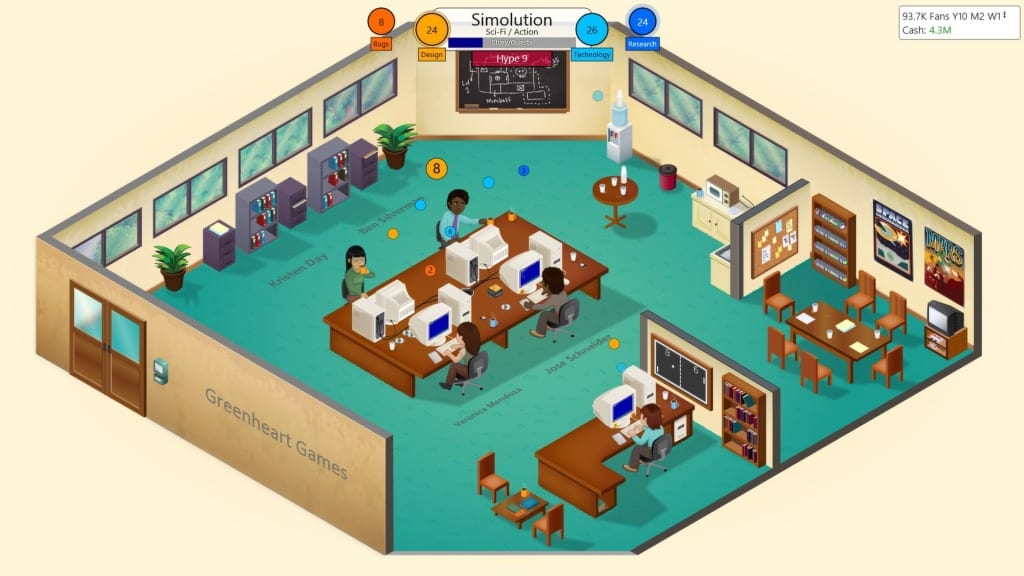 Game Dev Tycoon pretty much follows the same tangent for the rest of the game – as you find out what game matches work, unlock new technology, create new engines and (hopefully) obtain the funds to get your games to the next level. As your company grows you can unlock two new building structures giving you up to a total of six employees (and a lot of empty underutilized space) that can be trained and specialized and more interestingly the ability to research new technology and even develop your own consoles to produce games for (and hopefully eventually dominate the market). Outside your own development company there are also options to work for a major publisher (Which is better for those without a sizable fanbase) and do contract work for a bit of extra cash.

This is only a brief overview of what you can expect from the game and there is more to be discovered. Despite the rather short length of the games main campaign, I have spent far longer playing it than I was expecting (Currently in Year 101). While its simple mechanics can be quite appealing for short / moderate length playthroughs, there were a number of stumbling blocks that kept Game Dev Tycoon from being a great game or one with long-term appeal. These included some unpolished and hastily introduced mechanics in the later stages of the game and a lack of any extension past a small development team of seven (Must be very short game credits) when there are nine key development areas. 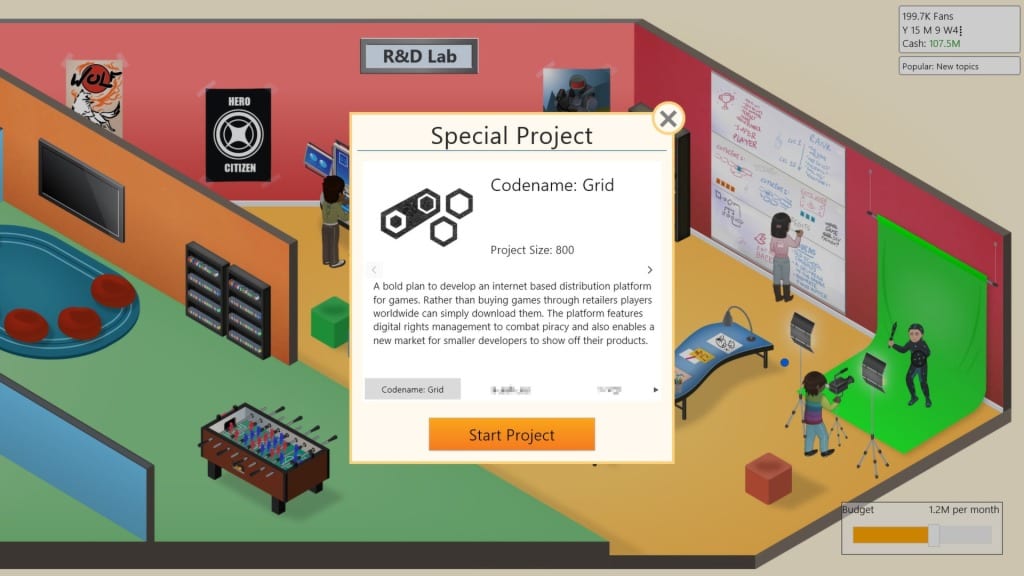 Game Dev Tycoon initially leaves you with a good impression in terms of design quality with its bright and colourful visuals as well as nods towards many other video game franchises on the market. But once you get over this (Especially in the third and final office design you will be spending a lot of time in), it starts to come across as being simplistic and all-around average in design with very limited customisation and a constant stream of blue, orange and red bubbles flying across the screen. They have all these static entertainment objects lying around the office and for years on end all the characters do is set at their desk and type – ignoring the TV, the Foosball table and comfier chairs.

The same can be said about the games soundtrack, which is just a small set of tracks pretty much on a loop. While they are never intrusive I found myself playing the game with my iPod on shuffle in the background.

But in the end, Game Dev Tycoon is a title that I was more than happy to throw a few hours into and quite enjoyed myself in the process – and ended up being pretty much what I was expecting from a $9.99 USD game. It isn’t something I could see too many people playing through multiple times to better their highscore, but it comes through with a number of interesting features that may very well appeal to those who wish to virtually act out their dreams of running a successful development studio.

While Game Dev Tycoon has been available for a number of months now, this review is in response to the game finally getting past the Steam Greenlight phase, with it to be available for download / purchase via the Steam service on the 29th August 2013.