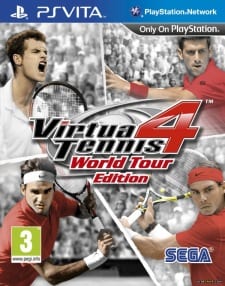 Title: Virtua Tennis 4: World Tour Edition
Developed By: Sega
Published By: Sega
Console: Playstation Vita
Genre: Sporting
Classification: This game has been classified G for General Audiences
Review Conditions: This review was done on an Australian Playstation Network version of the game. There should be little to no differences between the versions.
Special Thanks: Sega Australia who kindly provided a review sample for this title.

I shall begin the review by stating this…. I do not find the act of watching tennis remotely interesting in any shape or form. Don’t get me wrong I understand that is is a big sport with numerous major events spread out over the course of every year – but perhaps it is the loud and annoying grunts every time a tennis ball is hit…. maybe it is the fact you do nothing put watch a ball go from one end of the court to the other…. maybe even that teacher that when I first started high school said I should give up ever hoping to be on the Tennis Inter-school Sport team after only watching me for a few moments (Which was fine… never actually wanted to join in the first place). Irrespective I do appreciate the degree of strategy that goes into the sport, despite the fact my last playthrough of a Tennis Sporting game was Mario Tennis for the Nintendo 64 which proved simple but enjoyable. Given the recent release of the Playstation Vita I decided I would jump in and give this launch title a go – and must say I was pretty impressed at what they had on offer in terms of both gameplay and adapting it to suit a portable market. Read on for my review of Virtua Tennis 4: World Tour Edition for the Playstation Vita. 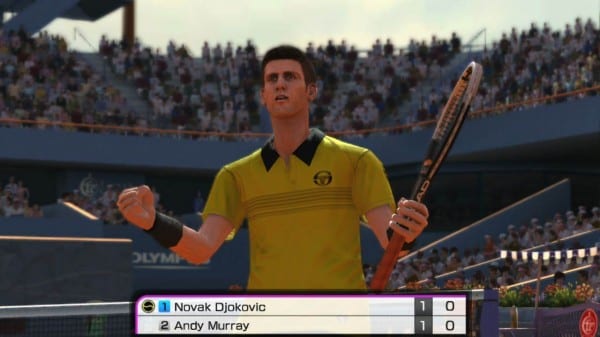 The game is not just a single-player experience where you play matches or take part in ordinary tournament every so often – instead while these options are actually available the main body to this game is its World Tour mode. World Tour is a campaign mode where you take control of a nameless but aspiring tennis player who decides to travel the world in order to take part in four seasons of tennis and aspiring to become the best ranked player in the world…. and this player is yourself. This mode is all about managing your time and resources (Money, Agents et cetera) in order to build up your reputation to be accepted into and/or seeded in the biggest of the big tennis events that are set to take place a month – if not a little more from your starting point. Ditching reality here you traverse the world not entirely of your own according but by making your way through a board-game like world and selecting randomly generated tickets with numbers indicating how far you can travel (Funnily enough, even if the main events had started – it will not let you do the obvious thing and fly directly to the event… potentially leaving you more than 20 days late for which everyone gladly stands by and waits for you).

Along this board are a number of different spaces which have for the most part been cleverly placed in order to provide both risky but rewarding routes along with safe and less-rewarding routes depending on how you intend to play the game. For example, you might have the opportunity to do a bit of publicity or charity work which can net you star bonuses depending on the level of the space is – so while there are many 1 or 2 star spaces relatively easy to get to – a 5 star would be surrounded by red spaces which result in your reputation dropping. Therefore, the game offers a diverse course on what way to take your career and can have repercussions on how easy and successful YOU are. The other spaces include the opportunity to take part in singles, doubles and tournament matches along with the mini-games to build up your skills… both of which I will describe in a bit more detail. 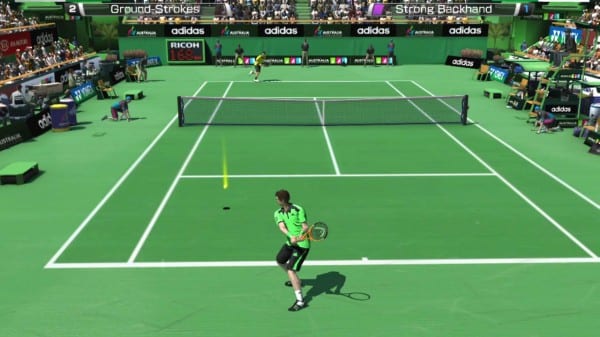 When push comes to shove, the skill mini-game sessions and the tennis matches themselves are the main draw to the game…. and while both may get repetitive if you play for an extended period of time I think they are stock standard for a game of this style and are what you would be expecting. First thing of note here is that I would stongly advise ditching the  thought of playing the battles through touchscreening and go with the normal buttons and stick control system as it is by far the most accurate and less tedious method to take. Before diving into the mini-games which were perhaps more original than I would even expect from a Mario Tennis game – lets discuss the actual gameplay.

The controls are simplistic, with you being able to move your player with the left and/or right control sticks, hitting with the X button and performing special attacks with the O button – stock standard. However the game makes clever use of the Play Styles system that encourages the player to play in a certain style in order to build up a gauge for a special shot. On the other hand, I found that this determined the style of tactics competitors used – with the individual players more proficient in that style of play. Unfortunately while the core gameplay was fun, in terms of difficulty it only slowly increased the difficulty as you went through the game – only shooting up and peaking in the final tennis match… on the respective normal difficulty I was still finding that I was finishing the game with 2 – 0 with no points scored by the other competitor. 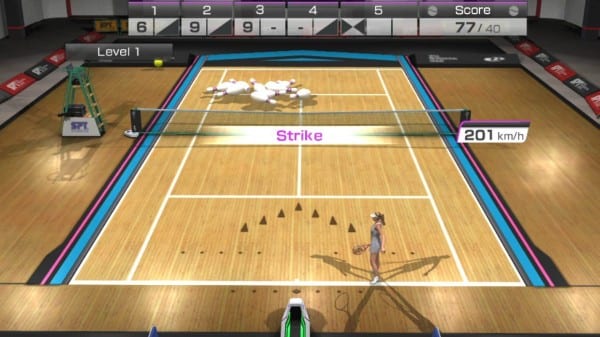 What I did enjoy however were the mini-games that were thrown into the mix to add a bit of fun and to help you unlock different play styles and increasing the limits for your stress gauge (Which if depleted can have a negative performance on efficiency and have you losing several days). These were games you would or would not expect in a normal playing session: playing in a court filled with fans to change wind direction…. sure but rescuing baby chicks from being hit by a machine firing tennis balls or playing a friendly game of “Explode the Bomb” were over the top but provided several difficulty levels and proved to be fun. However, as the game progresses, you will find less time to play these games and will instead be trying to generate a high enough ranking to progress through the rest of the game – essentially making it a system that would be underutilized due to other gameplay systems.

In the end, the World Tour mode was pretty fun and gave you a number of different means to play. As well, with the exception of the tournaments which can get time consuming – it is something you can pick up and progress through when you have five or ten minutes at least. Is it worth replaying through a second time? Yes and no…. the game provides plenty of unlockable content from unique tennis rackets to apparel for your custom character to wear along with many different routes to take the game so you are looking at many hours of game time here, but it needs to be weighed against the fact you would be playing almost the exact same game all over again. 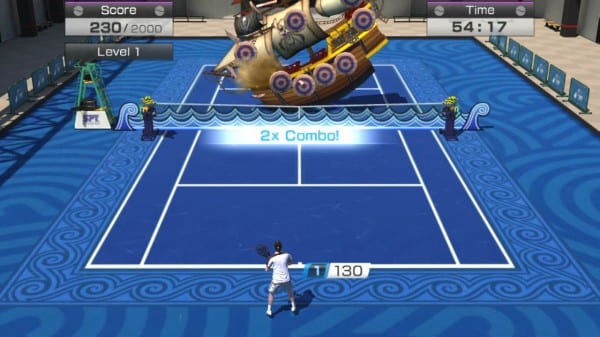 If you choose to not go through World Tour mode again, the game does come with many other modes including Arcade (“Play singles or doubles in four of the biggest championships”), Exhibition (“Adjust settings freely to play games”), Online Multiplayer and practice modes for the tennis matches and mini-games which are all enjoyable depending on what you want to get out of them. BUT for those who want something unique to the Vita version that was not in the original home console releases, they have also included VT APPS which are a bunch of mini-games that make use of the Vita’s capabilities from controlling a giant pirate ship with the console to hit targets on it to two player touch-screen tennis (Unlike single-player controls… this is not half bad). But overall… while replayability will depend on the gamer I think the game provided quite a nice collection of gameplay options and certainly surprised me given an envisioning of another boring single-player experience.

In terms of design… the key element of interest here is the ability to superimpose your face onto your custom character, which has been tried many times before on games and either works or it doesn’t… but I am undecided on how my custom character came out. They provide a step-by-step walkthrough to generate your characters facial appearance but after three attempts all I seemed to get was the same fact that looked little like my own even with tweaking. But hey, even if it didn’t fully capture facial details (Which might have been an issue on my behalf), at least we can say it didn’t provide the weird facial features of TV Superstars. In terms of other design aspects… they were pretty good considering the Vita’s capabilities with some well animated and customization character models, very little in terms of awkward character animations and a variety of court designs. In terms of music on the other hand, there was very little in terms of actual music but fortunately didn’t have any prominent player grunts so I was pleased in that regard.

Overall, while I am now interested to see what a home console version would be like, I think Virtua Tennis 4 has welcomed me to give games like this another chance – albeit with hesitation. It is well designed to allow play sessions of anywhere from 5 minutes to a couple of hours and made good use to the Playstation Vita’s capabilities to deliver a visually impressive experience. Other than that it seems quite hard to really screw up the core gameplay of a tennis game….

Final Score
Storyline/Character Development: N/A
Design: B+
Music/Voice Acting: B-
Gameplay: B
Replayability: B-
Personal Opinion: B
Overall Score: B