The Manga Guide to Electricity – Review 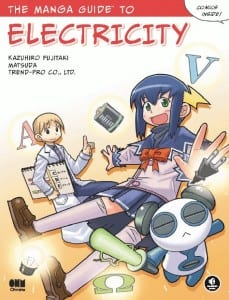 Rereko is just your average high-school girl from Electopia, the land of electricity, but she’s totally failed her final electricity exam! Now she has to go to summer school on Earth. And this time, she has to pass. Luckily, her ever-patient tutor Hikaru is there to help. Join them in the pages of The Manga Guide to Electricity as Rereko examines everyday electrical devices like flashlights, heaters, and circuit breakers, and learns the meaning of abstract concepts like voltage, potential, current, resistance, conductivity, and electrostatic force.

It has been more than a year since I last reviewed one of the installments in The Manga Guide to series and since then there has been no word on any new installment in it past The Manga Guide to Linear Algebra which was released in May 2012. Therefore in the lead-up to my next full review of Dynasty Warriors 8, I pulled out one of the older editions from my archives to write a quick review of. In the past I reviewed both Biochemistry and Linear Algebra and still have Electricity and Molecular Biology sitting on my shelf. Therefore I chose yesterday to read the book on the topic I have less knowledge about…. Electricity. The purpose of “The Manga Guide to” series is not to give you a compendium of knowledge on a specific educational topic – often in the field of science or mathematics. Instead in the case of this book you receive a “crash course” in the key areas surrounding electricity such as Ohm’s Law, key concepts and more practical examples. But lets be honest… textbooks are sometimes boring to read through so rather than learn from something that could easily be a substitute for a brick the concepts are delivered through manga-chapters and a fun and light hearted storyline. Given its 224 page length The Manga Guide to Electricity is far from substituting other learning materials, but is a good thing to have in your studying arsenal. 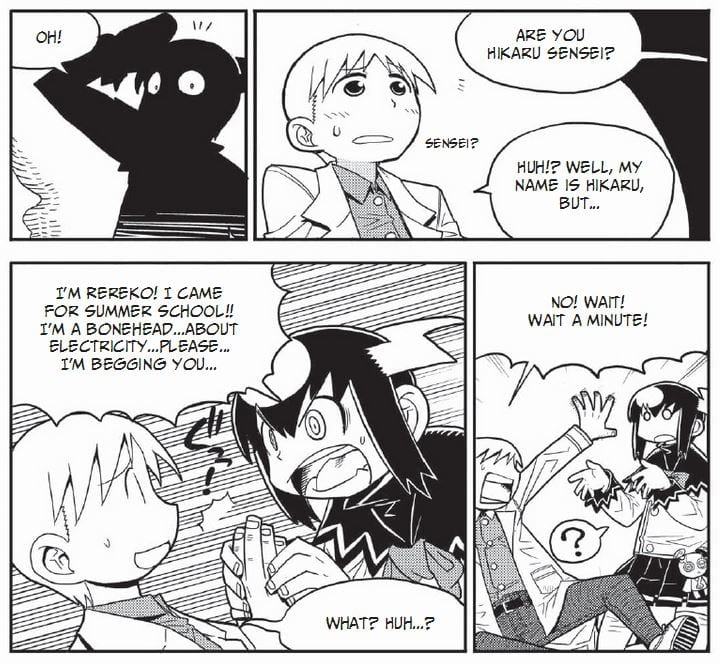 The story follows Rereko, a high school girl from Electropia, the Land of Electricity who (as she states in the image above) is a complete bonehead when it comes to electricity. Having failed her final exams on the subject she is sent to the human world to study up on it with her unsuspecting tutor being Hikaru-sensei, an Electrical Engineering Researcher who takes Rereko under his wing to ensure she passes her exams.

There are a total of five chapters in the book with topics ranging from “What is Electricity?” to “How to you Create Electricity?”, and they actually end up rather quirky and entertaining. As I only studied Biology and Chemistry in High School my knowledge of Physics is considerably low in comparison – however I found the concepts pretty easy to grasp and they seemed to be at an appropriate level for High School students or introductory University courses. The dialogue and interactions between the characters were also used quite well in explaining the concepts – an example being the effect of static electricity through the demonstration of a vinyl sheet on Rereko’s hair.

While they never really delved into the harder concepts of electricity of physics (Given its size this is pretty obvious), they intermingled the basics well throughout the chapters and then went into more detail to them in the more textbook style mini-chapters between each of the chapters. These served as solid reference sections especially since it is harder to backtrack when you have a storyline associated with the concepts. 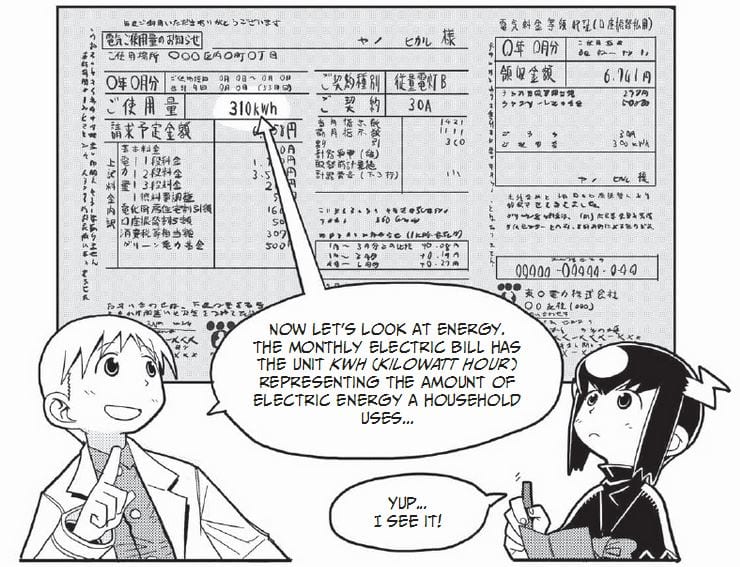 My thoughts on the design of this release is similar to that of other installments in the series. Given their purpose the characters are well thought out, as a researcher Hikaru takes to wearing a lab coat (To quote Okabe from the Steins;Gate anime “Nothing says chic like a crisp white lab coat) while they chose to go with a futuristic electronic design for Rereko giving her origins as a resident of Electopia. Environment designs are also lacking but this draws the attention to the additional elements they add to the background to draw the readers attention to an educational concept. Unlike their books on Mathematics and Life Sciences I have nothing to compare to but the diagrams drawn in the more academics focused mini-chapters were also well drawn and relatively easy to read from with the supporting text.

The Manga Guide to Electronics is by no means a replacement to the usual bricks (Science Textbooks) that students have to lug around every day, but instead serves to complement the text and your other learning instruction. Heck, it even makes quite an enjoyable read with the added bonus of potentially learning a thing or two. Given its price it might be worthwhile picking up – and if you are uncertain No Starch Press have a sizable preview chapter available to check out on their website. 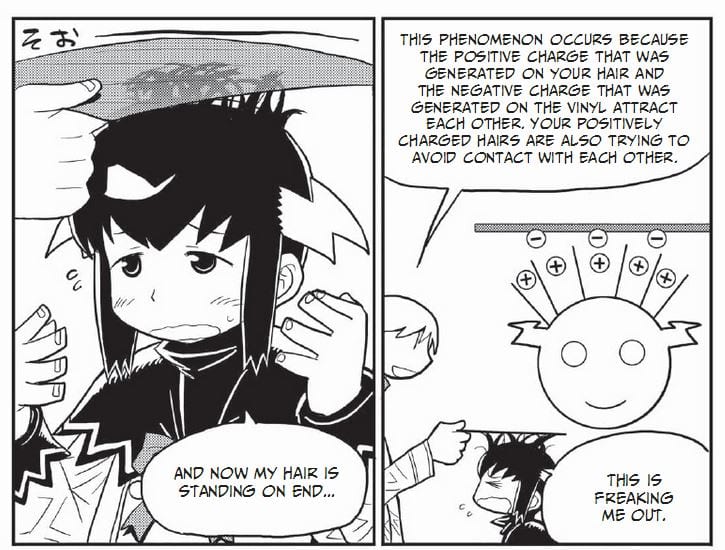 Don’t forget to check out my other reviews of The Manga Guide to Linear Algebra and The Manga Guide to Biochemistry. If you are also into chemistry I also recommend reading my review of Wonderful Life with the Elements: The Periodic Table Personified which came out being my Book Release of the Year 2012.

No new localized releases in The Manga Guide of series are planned, but I personally do hope this changes soon.