We are in the middle month of each season, so that means we can look forward to a range of new anime shows commencing over the next few weeks. While it is too early to tell which shows will be tops and which will be flops, I would like to share the four shows I have chosen to pick this season and plan to continue watching through to their conclusion.

This list is based purely on the shows available / to be available on the Australian and New Zealand streaming service, AnimeLab. Availability may differ from region to region, so please check out your local anime streaming services for what is available in your territory.

Although it took more than a decade after the game’s original release, The World Ends With You (Aka. Subarashiki Kono Sekai) franchise finally receives the attention it deserves. In addition to a current-gen port to the Nintendo Switch and a sequel we have to look forward to, the animation studios DOMERICA and Shin-Ei Animation are bringing an anime adaptation to screens this season.

Now, I would argue that the narrative of The World Ends With You is filled much more with style than actual substance, with the most interesting titbits of its lore hidden in unlockable post-game notes. However, I will be interested to see how the game is adapted to this story-telling format, and am already stoked that the creatives have kept the similar, more-unique artstyle of the game.

The World Ends With You the Animation has been licensed in the United States by Funimation Entertainment, so hopefully that means a simuldub will commence in the coming weeks. The series is being directed by Kazuya Ichikawa, with character designs by Tetsuya Nomura and Gen Kobayashi, the adaptation work by Midori Gotou, music by the amazing Takeharu Ishimoto and with Tomohiko Hirano and Tatsuya Kando supervising.

Neku awakens in the middle of Shibuya’s bustling Scramble Crossing with no memory of how he got there. Little does he know, he’s been transported to an alternate plane of existence known as the Underground (UG). Now an unwilling participant in the mysterious “Reapers’ Game,” Neku must partner up with a girl named Shiki in order to survive. Together, they complete missions and defeat monsters known as “Noise” as they gradually uncover the true nature of this twisted Game.

“There’s only one way to stay alive in Shibuya: trust your partner.” Will they survive the Reapers’ Game?

When it comes to video games being adapted into anime, you can generally get a good sense of the likelihood of this happening a few hours into the game. Blue Reflection from the development team at GUST was an ok RPG for the PlayStation 4, but quickly fell into the ether and even today never really received a digital release here in Australia. So, compared to their work with the greatly more popular and renowned Atelier series, I did not expect Blue Reflection Ray ever to be created.

I put this on my picks however, as it had an intriguing story which I think would serve better with all the gameplay elements taken out – with more relatable characters, a magical girl plotline that doesn’t go too overboard and school life elements which will hopefully be sans much of the typical fanservice.

Especially with the narrative of magical girl stories going down the darker routes of Puella Magi Madoka Magica and Magical Girl Raising Project in the past decade, I would argue I am just excited for a more run-of-the-mill tale.

Optimistic Hiori can’t turn away anyone in need. Clumsy Ruka can’t seem to make friends, even when she tries. Together, this unlikely pair will use the power as Reflectors to help those in need with their emotional struggles and change the world.

Each season I try to pick a show which is a little more mellowed, more grounded in reality and is most importantly uplifting. My pick for the April 2021 season is Super Cub, produced by Bandai Namco arts and animated by Studio Kai.

Madman Entertainment really weren’t giving much away to the casual viewer when listing the show on the AnimeLab streaming website, with Super Cub‘s whole bio whittled down to:

But you know what, I am game for diving into the unknown, and I hope my intuition is right this time around! But the first episode was pleasantly enjoyable, with an easy-on-the-eyes art style.

I am not too big a fan of sports anime. But when you hear of a late-90s anime and manga franchise being rebooted, that is when something of this genre catches my attention. I can’t help being tempted into seeing if there is anything here to justify new hands reviving the series more than two decades later, or perhaps changing my opinion on the genre as a whole. Following the serialisation of a reboot manga last year, the animation studio Seven are moving ahead with an anime adaptation of this next week.

Of the four, this is the series I am most shaky about maintaining interest in, but it sure beats committing to one of several other isekai anime beginning to air this month.

Aspiring athletes from around the galaxy gather to compete in a tournament where the winner will be crowned the Cosmic Beauty.

What begins as rivalry grows into friendship among the athletes, including a lunar refugee and her kangaroo companion, the daughter of an arms-dealing CEO, a mysterious loner, and Earth’s representative…a humble potato farmer named Kanata Akehoshi. 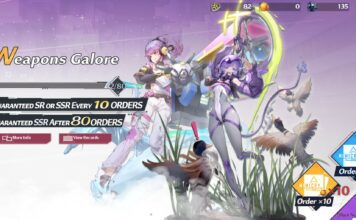 Tower of Fantasy Presents One of the Better Gacha Pity Systems

I am COVID-19 Positive, Please Excuse the Delays