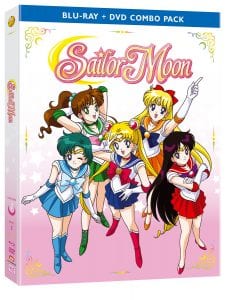 VIZ Media have today confirmed that they will be releasing the next retail instalment in the original Sailor Moon anime franchise during February. Season 1, Set 2 will be available as both a Blu-ray/DVD Combo Pack and Standard DVD set on February 10th 2015. This latest home video release will contain Episodes 24-46, along with an uncut English dub and a variety of bonus extras. The combo pack will set fans back $69.99 USD / $81.99 CAN, while the DVD set will be considerably cheaper at $44.82 USD / $51.99 USD.

In the latest collection of episodes, Sailor Moon, Sailor Mercury, and Sailor Mars continue their quest for the Legendary Silver Crystal as two new powerful allies join the fight. Meet Sailor Jupiter, the tall and tough Guardian of Thunder, and Sailor Venus, Guardian of Love and most experienced member of the Sailor Guardians.

Sailor Moon herself gets an impressive new power and learns more about the mysterious Tuxedo Mask. Could their distant past be intertwined, and does that have anything to do with the Moon Princess they seek? The final ordeal with Queen Beryl looms on the horizon, and it will take everything the Sailor Guardians have to be victorious!

VIZ Media’s release is targeted towards North America and Canada. Australian’s have to wait until April 2015 for Madman Entertainment to release their first DVD-exclusive collection which has been created from scratch using “high quality remastered standard definition materials”.