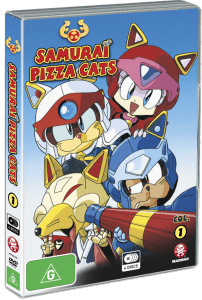 Growing up in Australia I spent pretty much every morning from school-age watching cartoons via either Agro’s Cartoon Connection on the Seven Network or more memorably, Cheez TV via the Ten Network – back before adult morning shows became a dominant market and pushed such programs out. These shows featured a number of cartoon or anime “localization” hits including Sailor Moon, Pokemon, Digimon: Digital Monsters, Yu Gi Oh! and many others. However after trying to navigate the labyrinth of my childhood memories I don’t recall ever watching Samurai Pizza Cats, first becoming aware of the show only a few years ago after its opening theme was played on the radio.

Despite not having the initial nostalgia factor that I have had with other series in the past, I had heard good things about the show, even from people who don’t really follow the cartoon / anime scene anymore. Therefore I was very curious to see what the show had to offer, but with no license holder options were limited. Over here in Australia, Madman Entertainment eventually came to the rescue and have just launched their first DVD collection of the show featuring the first 26 episodes, with the second half-season collection due this December. Despite initial perceptions, did Samurai Pizza Cats end up being something I truly missed out on experiencing during my younger years or was it a complete bore not worth reviving among the many other 90’s anime titles that haven’t received the honor? Read on to find out in my review of Samurai Pizza Cats Collection 1.

Just before getting into this review, please be warned that this is only for the ENGLISH DUBBED version, with Madman Entertainment not confirming any plans for the Japanese dubbed release in Australia at this point in time. For those who are aware of the series’ history in the English market, you will already know that the English and Japanese dubbed releases will differ considerably and a review for one should not be considered an accurate review for the other dub. 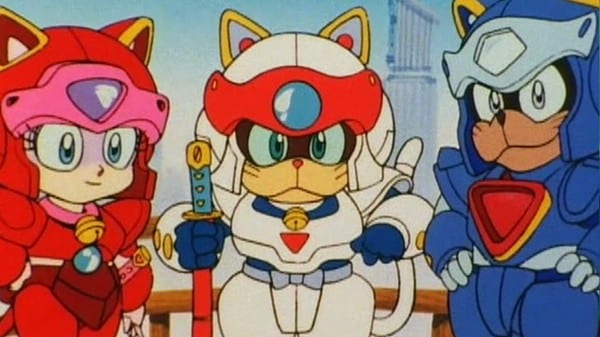 Samurai Pizza Cats follows three felines – Speedy Cerviche, Guido Anchoby and Polly Esther who work at Pizza Cats, a popular pizza emporium in the community of Little Tokyo. While delivering pizza may be their day job, when crime threatens the safety of Little Tokyo they become a ninja trio – often left to foil the devious schemes of Seymour “The Big” Cheese and his sizable cast of goons who are just as persistent as other cartoon villains of the time. While referring to earlier episodes frequently, most of them are episodic and focus on one issue per episode.

When Saban first licensed the rights to “Kyatto Ninden Teyandee“, due to the events that followed they were left with no formal translations for the show. Therefore rather than tie in and remain faithful to the Japanese episodes which they did to some degree with Digimon: Digital Monsters, they rewrote the episodes to be more comical, laden with fourth wall breaking, pop culture references and spontaneity. This localization job (if you could call it that) is where both the charm and my frustration towards the series stems from. The comedy is the main draw for the series, and for the most part is genuinely entertaining – delivering an experience that few series have attempted to do even today.

While this might be an individual peeve, the major problem was that the show became tiring to listen to for more than a couple of episodes at a time, where I found myself wanting more substance to the events taking place. It was a style of comedy that was better refined in the 1993 animated series Animaniacs, which had the added perk of not requiring additional ADR work and didn’t always rely on full-length episodes for one idea. However I can envision that the structure of the episodes would have been great for morning television, where with one episode a day, the 52-episode season would be broken up and not become over-kill on the jokes. 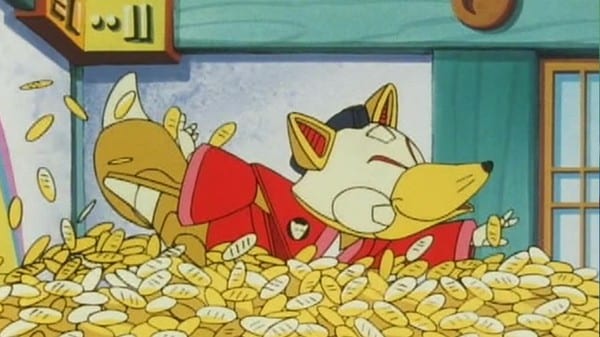 If you can get past this issue, there is little stopping this series from being a complete hoot, and is a breath of fresh air from the poor rewrites involved in the 90’s Japanese –> English anime “cartoon” adaptations of the time. There remains little in terms of character development or an overarching plotline, but even as someone who is always after a great storyline there is a time you need to step back and appreciate the challenges faced by the production team and the solid end product they ended up with despite having to work from scratch. I could see this as only appealing to the older audiences however, with many of the jokes / references potentially being lost to future generations.

With the original anime series airing more than twenty years ago, the preservation of the animation and audio was really good and it looks just how I would expect any 90’s anime / cartoon to have looked on the TV back in the day. Despite the Americanization of the dialogue due to the reasons mentioned above, the visuals don’t seem to have been notably edited, with the primary location being referred to as “Little Tokyo” rather than New York City with heavily edited in skyscrapers or whatever. Please note that despite the images in this review, Samurai Pizza Cats is only available in its original 4:3 aspect ratio.

The character designs are presented in a semi-chibi style, with most of the main characters having distinct designs that tie in with either the mecha / ninja theme or the Japanese styling of the location. As with the environments and animation, you will come to realize that they overuse certain scenes such as the “launching off” and certain battle poses almost every episode – which the narrator or another character will often point out.

One of the more memorable aspects of the show from what I can tell is its opening sequence, which is available in full above. It is a fun, entertaining theme that is mean’t to highlight the less serious nature of the show while appealing to a broader audience. This seems to be another trait similar to several Saban Entertainment English releases, their theme songs stick in your head even if the Japanese editions are better. Reprised versions of the theme song are also included in the “Call of Action” scene and the ending sequence. There is nothing particularly special about the remaining musical backing, and it pretty much just does the job. Following the trend from the era, the musical backing is separate from the Japanese release.

Voice acting is over the top, with Rick Jones, Sonja Ball and Terrence Scammell each putting much passion into their roles as Speedy, Polly and Guido respectively. Given the goals of this series, each of the characters sporting very distinct mannerisms and reactive responses that complement the dialogue and the many tropes / references they make use of. The true highlight however was Scammell as the narrator, who joins Jim Cummings (Where’s Wally) as one of my favorite comical narrators from series produced during the 90’s. 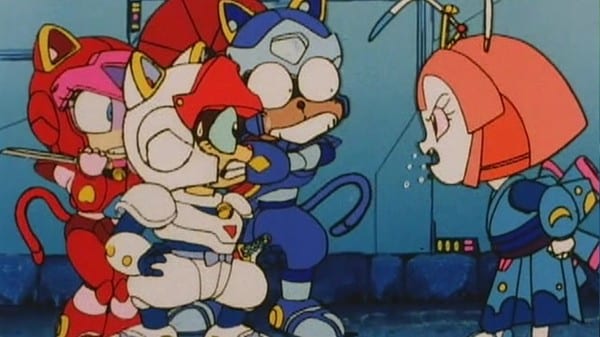 As with many of their other classic releases, Madman Entertainment have only included a small collection of trailers as “extra on-disc content” in this collection.

Samurai Pizza Cats is something that I feel is better experienced how it was originally mean’t to be watched, a couple of episodes at a time to appreciate its comedy without its comedic tone becoming overkill. It is an experience that you would only find in a few animated series even today – with well placed humor, quirks, fourth wall breaking and more, and is something that is unique and most of all… fun. While I do question if today’s younger audience would be able to appreciate everything Samurai Pizza Cats has to offer, I am now starting to feel disappointed that it wasn’t part of my morning cartoon schedule!