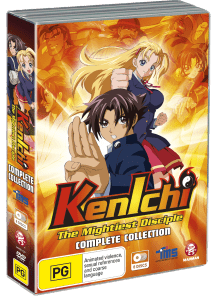 Yeah, Kenichi’s a total wimp. He’s always getting picked on and doesn’t have a lot of friends to stick up for him. The guy needs motivation if he hopes to graduate in one piece. Well, Miu’s the perfect motivation. She’s hot, she accepts him, and she just so happens to live at a dojo with six martial arts masters. You could say fate has led Kenichi to their door, or you could say he was just following the hottie. Either way, he’s about to get whipped into serious shape. If he can survive some hard-core training, he might survive another day at school. He might even score with Miu. Yeah, you could call Kenichi a wimp. But let’s go with underdog instead.

Kenichi: The Mightiest Disciple was one of the very first Madman Entertainment releases I reviewed back in 2011. Split over two collections spanning 26/24 episodes each, I never really got past the first collection. While there were some very entertaining episodes in the mix, there were a greater number that never really passed the mediocre mark. As I was wrapping up my Uni degree, my time was already limited therefore I had to give up seeing if the second collection improved upon the first… until now

Last month saw Madman Entertainment finally release the full 50-episode collection of Kenichi: The Mightiest Disciple on DVD split over eight discs. Given my curiosity on what could have been I decided to check it out. This review has been written up using the original as a foundation and then modified to cater for changes in opinion based on the content in the second collection’s worth of episodes. Unfortunately however there is nothing that made the second half anything more special than the first. The series follows around Kenichi Shirahama, a weak male high-schooler who follows the generic male protagonist trope of having the desire to be strong in order to protect himself and the ones he cares for. So he decides to join the karate club and gets treated like dirt. Enter the female protagonist Miu Furinji – an incredibly strong girl from his class who offers to take him to her dojo and train him up so he can earn a place on the team.

Of course, rather than have her exclusively train him one on one – Kenichi is trained by the dojo’s six buff dojo masters of different fighting styles who pummel and unethically torture him. While it was never their intention for him to win the fight, their training pays off and he manages to beat one of the high-up members on the karate team. As the dojo instructors had initially feared… Kenichi had drawn attention to himself and has started being hunted down by a whole team of fighters known as Ragnarok. Each of them are skilled fighters and are out for his blood. His only option is to train even harder to ensure his safety. The storyline writing was average at best, and sounded like a generic mush of stereotypes that sometimes produce comedic and creative scenes and/or episodes. But for most of the time you can expect plot that is too slowly paced and often come across as nothing but filler content. Unfortunately things never seem to change much in the second half of the series although there is still the odd episode that props itself up and highlights what this series could have been.

An issue I noted in my original review was that they tended to have a habit of spontaneously ending an episode without any sort of conclusion and then following on with a completely new plot the next episode. An example being the obligatory “beach trip” episode: Kenichi rescues his little sister from being attacked by sharks then the episode cuts out – with the next episode with them being at the dojo. What happened between the two episodes is what I would like to know? Did they think that after the action is finished there was nothing else worth watching to merit a 30 second conclusion? The plot development also seemed a bit shaky. For the most part, the episodes take place at the dojo and in the town during training, but at seemingly random moments they decide to throw in another member from Ragnarok or antagonistic character for Kenichi to fight. That being said the better episodes were the ones away from the main storyline. I preferred the focus on the different masters unique quirks and (torturous) training methods. Even the incidents involving Kenichi’s family were entertaining, with them being the most eccentric out of all the characters. Sure some may see these episodes as filler content, but they were better produced than main episodes in some occasions.

From the look of things however, this is a series you will either enjoy or find bland. While I wouldn’t say I enjoyed it, I asked someone else who I know had watched it and they thoroughly enjoyed it. If the series tried to break away from the stereotypes and attempted to try something more unique I think it would have fared much better. In terms of the overall design, the environmental designs were actually very good. All of the environments around town looked extremely well done especially the concept and appearance of the dojo, which is the primary location of the series. The dojo has a sort of ancient charm to it, with overgrown plants and vines around the building’s walls to give it the aged look. The areas around town such as the school and the streets within it also had a decent level of detail and looked modern enough that it gives the dojo a sort of conspicuous and out of place feeling to it.

The character designs were also of an adequate standard, with enough detail added to the characters to make them look realistic enough. A particular highlight was that the design team at TMS Entertainment managed to utilize a number of artistic styles commonly found in comedic scenes to help contribute to the comedic effect (For example: The enlarged screaming head for emphasis).

Of course when it comes to any anime series surrounding martial arts, the most important aspect of its design is the animation. I am happy to say that the fighting scenes did not appear overly fake and un-natural in terms of movement, and most of the fights turned out pretty well. However the quality noticeably diminished in the later episodes – with the animators opting to use shortcuts alongside an occasional dip in visual quality. The music backing of Kenichi: The Mightiest Disciple was underwhelming and lacking when the situation required it most. Many of the tracks felt to be more suited to the calmer moments in the dojo and around town rather than the fighting scenes.

Fortunately the voice talent proved to be more than capable, with both English and Japanese voice acting both being strong enough to be viable options. Josh Grelle who voices Kenichi manages to pull of the sarcastic moments of his character spot on while Trina Nishimura, Sonny Strait and Kent Williams who voice Shigure, Apachai and Akisame respectively also do their characters justice. The only character whose voice I wasn’t very keen on was Miu’s, which whilst not being bad did not reach the same level of seriousness as I would have liked from her character. Either way I would recommend choosing whatever voice acting you would prefer as both do the job well.

Unfortunately over the eight discs the extra content is minimal at best – disappointing considering that Funimation usually manages to pull out some great content even in their other 52 episode collections of the time.

Over discs four and eight, the only extra goodies include the textless opening and closing sequences as well as trailers for various Madman Entertainment titles. If you pick up the North American edition from Funimation Entertainment the extras seem to be almost the same albeit with different trailers.

Unfortunately there is nothing present in the second half of Kenichi: The Mightiest Disciple to warrant any score increase from my original review back in March 2011. It is by no means a bad series and may appeal to some viewers more than others but unfortunately at 50 episodes in length I think it really needed something a bit more substantial to warrant watching all the way through.