Unlike other recent video game to anime adaptations, Danganronpa has yet to see a release outside of Japan, with one planned for early 2014 from Nippon Ichi Software America. While usually I would write this reviews on the first episode of a season I have chosen to go a bit further in until the end of episode 3 which concludes the very first chapter of the game.

The premise of the storyline is that 15 students have been selected to attend the prestigious Hope’s Peak Private Academy which only accept students who are the top of their academic, sport, hobby or other niche field as well as a single student who is deemed “Super High-School Level Good Luck” who the main protagonist Makoto Naegi has been selected as. Unfortunately none of the students are lucky as the moment they step foot across the school gates they lose consciousness and become trapped in school hell.

Taunted by an evil black-and-white teddy bear named Monobear, the only way any of them can leave is to “graduate” by pulling off a successful murder of one of their classmates – if they fool everyone else they get to leave while everyone else is “punished” – if they fail they get “punished” and the other students live to fight another day. Of course there is the option of living out the rest of their days in peace within the locked down school…. but how many days could that peace last? 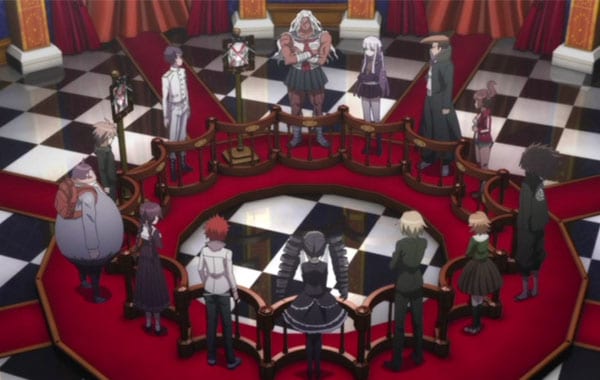 While I have yet to play the video game series, going from what I have read the anime series remains relatively faithful to the source material so far – meaning watching this series now might not be in your best interests if you want to play Danganronpa: Trigger Happy Havoc next year without any pre-existing knowledge. While getting off to a slow start as they take to introducing all 15 characters in the first episode, they are soon plunged into the first murder mystery and have to solve the case “classroom jury” style using all the knowledge they have gathered.

With the number of different character personalities each with different contributory roles and the more fast paced nature of the debates it made for an interesting watch in relation to both the logistics behind the murders committed as well as the emotions of the different characters. It is made clear from the beginning that not all characters receive equal attention and this may be indicative of their roles as victims, perpetrators and detectives in future episodes. While it is safe to assume that Nakoto Naegi will retain his role as protagonist throughout the episodes – characters such as Kirigiri received quite a lot of dialogue in the trial while several other characters were reduced to a couple of mere lines. At the very least, I can say that Monobear makes a creative antagonist.

Aside from a clue that some might find glaringly obvious from the start, the complex nature of the mystery for just the first incident has left me with reasonably high hopes for what I can expect in future chapters. At least we shouldn’t end up with simple X murdered Y cases without some complex twist. 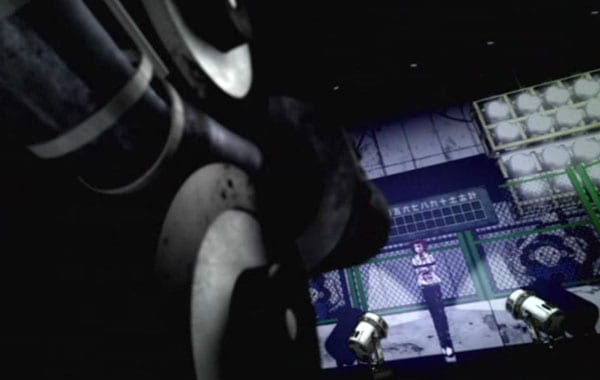 The quality of the visuals and animation in Danganronpa: The Animation is quite nice, and draws from the source material well to the point where the “punishments” (albeit censored) and a couple of other aspects of the animation draw directly from the original video game styling (See above). Also for those who are afraid that this will be a bloody series fret not….. all blood portrayed so far in this series has been fluro pink in colour which I found reduced the visual impact considerably.

Both the opening and ending sequences are also a highlight. The main opening theme is titled “Never Say Never” by TkDzZb with vocals provided by The 49ers (Jas Mace and Marchitect) alongside Tribeca and comes coupled with animation that draws from the key character artwork from the game as well as a dancing Monobear which makes it quite a fun and colourful sequence overall. The ending theme is titled “Zetsubousei: Hero Chiryouyaku” by Suzumu feat. Soraru and utilizes 8-bit character designs for each of the characters and background artwork which Naegi and the students who have failed appear on. 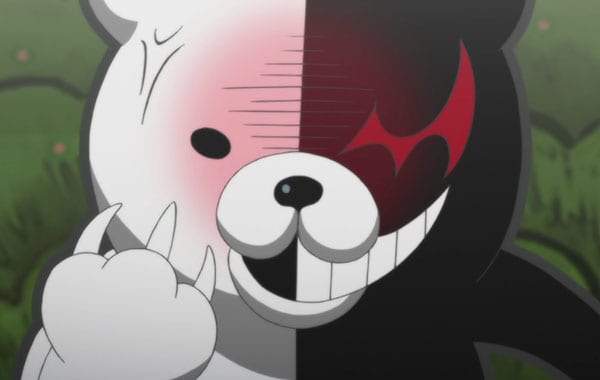 Given that this series draws considerably from the source video game, I am skeptical that going any further may destroy the crux of the mystery/trial element of the game when it launches next year. However looking at the anime series alone while I don’t think they would be able to bring everything over in thirteen episodes if they pace themselves well I think the production team could produce quite an enjoyable series that I would be tempted to pick up when launched internationally by Funimation. No Australian publisher has come forward with an acquisition of this series yet.

Happy Friday! As you begin to unwind from the stress of the working week, you may be looking for a new anime...
Read more
Anime

After airing in Japan in September 2020, and based on the original 2018 coming-of-age TV animation Violet Evergarden, Australian anime publisher Madman...
Read more
Anime

Among the many, many, many anime seasons on offer within the AnimeLab streaming library, there are a...
Read more