The Garden of Words / Kotonoha no Niwa – World Premiere Review 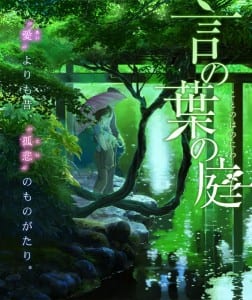 We have met, for each of us to walk forward.

From the acclaimed Japanese director of The Place Promised in Our Early Days, 5cm Per Second and Children Who Chase Lost Voices comes another dramatic animation piece set in the modern era about koi in the original “lonely sadness” meaning — of longing for someone.

Takao, a shoemaker in training, skips school to sketch shoes in a Japanese-style garden when he meets a mysterious older woman, Yukino. Then, without arrangement, the two start to see each other again and again, but only on rainy days. They deepen their relationship and open up to each other, but the end of the rainy season soon approaches…

With the Gold Coast Film Festival holding host to Australian premieres of 5 Centimeters Per Second and Children Who Chase Lost Voices from Deep Below, Makoto Shinkai and the team at CoMix Wave Films decided to do something a bit different this time around. After already holding host to another legendary director – Mamoru Hosoda – the week before, he decided to not only appear in person to literally a full cinema of fans, but also holding the world premiere of his latest film The Garden of Words (or Kotonoha no Niwa). Being in the area, I was fortunately able to attend the event, get a poster signed (Currently hanging framed on my wall), sit down and have an interview with the legendary director (Should be up soon) and of course check out the film myself.

Given that this is an original work based on no prior existing storyline, and that the film isn’t even due to air in Japan until the end of this month… I am going to keep very tight lipped about the storyline to avoid ruining the storyline before anyone else has a chance to watch it – but instead I hope you will enjoy my secretive review of the film itself! 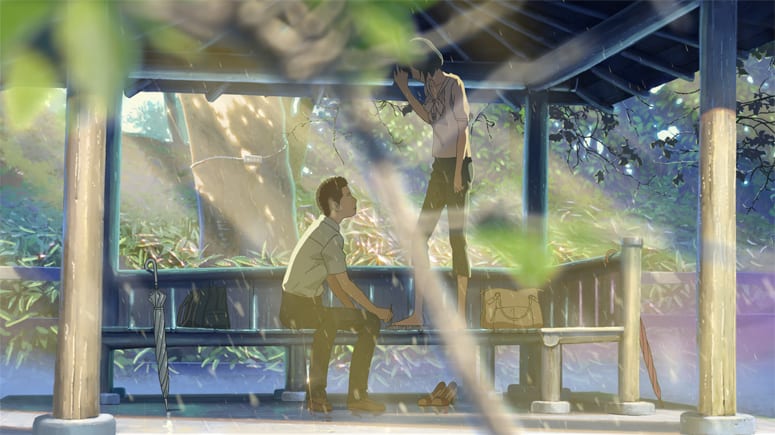 The storyline follows a young student by the name of Takao, whom has a particular interest in shoes and particularly on rainy days likes to skip school and in turn spends those mornings in a Japanese-style garden. One day he comes across another mysterious older woman Yukino who, begins to join him on these rainy mornings – and as the rainy season they begin to meet up with each other day after day, building their relationship with each other. Covering the span of several months, I will leave you to imagine some of the events that occur, but when comparing this film to Makoto Shinkai’s most recent work until this point “Children Who Chase Lost Voices from Deep Below”, they are stark in contrast – from the complex journey through Agartha to the simple but immersive love story between a boy and an older woman.

One of my initial concerns with this film was the length, which coming in at only 46 minutes was considerably short from his usual hour to an hour and a half long masterpieces he usually presents. I will admit that I would have liked to have seen the direction they could have taken the film at a longer length, especially in terms of the sub-characters that only contributed to the backstory and setting. However, I think for the storyline that was delivered, such a short length allowed the story to not be hindered by anything that took away too greatly from the main storyline and kept the focus on Takao and Yukino. While there were a few references to Japanese culture and other aspects that may not be as well known to the international audience, the film isn’t too dialogue heavy and uses emotions / symbolism /scenery as much as the conversations to convey meaning and expression. The film also flows well, and switches between the viewpoints of the main characters harmoniously.

While you can expect to see much more in my full review upon DVD/Blu-ray release in Australia, what I will say now is that while The Garden of Words may not be the best Makoto Shinkai anime film storyline-wise and does have a few spaced out issues (Such as some characters being introduced with limited if any development and a few timing issues here and there) , it still makes for an interesting watch that would be a great addition to your must see list this year. 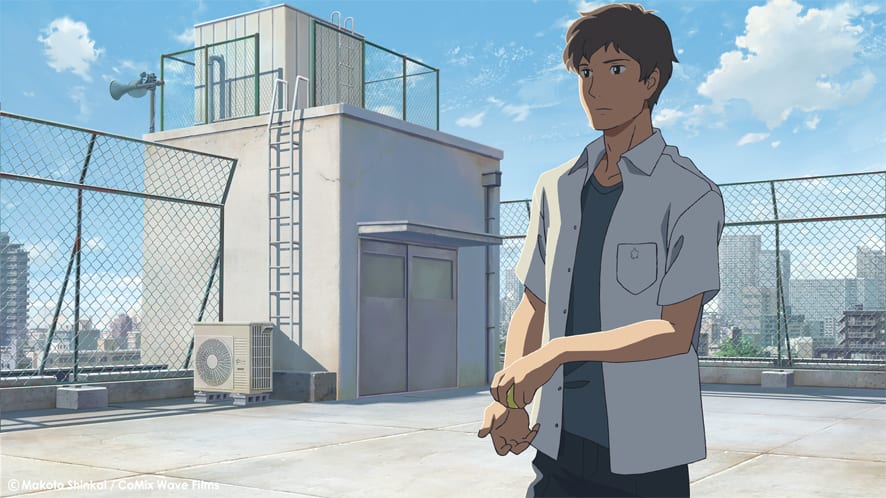 When you watch any of Makoto Shinkai’s work in the last decade at least, you go into it expecting beautiful environments bordering on “scenery porn”, and The Garden of Words is by no means an exception. As I feel with Children Who Chase Lost Voices from Deep Below, I am left saddened that I will most probably not have the opportunity to view this film on the big screen again, as it allowed every centimeter of the scenery to be carefully examined and appreciated. The environment designs were once again up to par with his other work, and near the end of the film there is a very impressively animated scene in the Japanese-style garden – but overall you should expect plenty of scenes with just scenery and honestly they would most probably be worthwhile being in the cinema for alone.

Character designs may be simpler and less impressive than the environment designs, and featured a similar concept to the designs used in 5 Centimetres Per Second. However I think while simpler, they harmonize with the scenery very well and don’t look out of place. 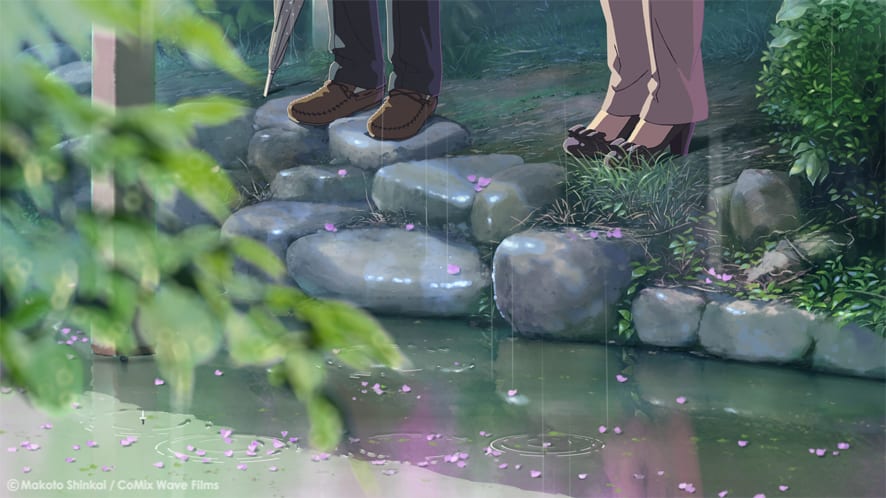 The music featured in the film consisted of more softer and reserved tracks which complemented the theme of the film well, and also provided a handful of lyrical tracks which when used were also pleasurable to listen to. Both main voice cast members are no strangers to voice acting with a diverse range of voice roles between them.

Miyu Irino (Whom has played roles such as Jinta in Anohana and Makoto in Ground Control to Psychoelectric Girl) whom voices Takao and Kana Hanazawa (Kanade in Angel Beats, Black Rock Shooter in Black Rock Shooter and Ruri in Oreimo) both suit their roles very well, and show their experience in portraying the emotion and underlying personalities well. 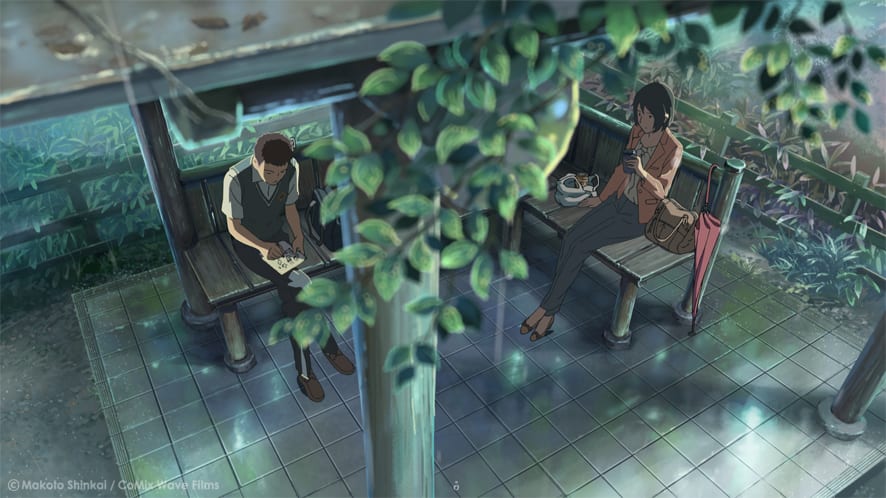 It certainly came as a pleasant surprise that Queensland, Australia would hold host to the world premiere of this film a month before its Japanese release. However I think the fans that were queuing up before and after the film, and the positive reactions I have been hearing from those whom were also in attendance speak for itself that the screening was a success. This film may not appeal to everyone who watches it, but to me and it seems many other people who have had the chance to watch it, it was yet another great release from Makoto Shinkai and CoMix Wave Films. I look forward to seeing what they have in store for us next.

Do note that this is only a tentative score until a physical media edition is released. Please look forward to it where I will be a bit more open with my analysis of the storyline. Also, don’t forget to check back for my interview with Makoto Shinkai himself!

Storyline / Character Development: B
Design: A
Music/Voice Acting: A
Personal Preference: A
Overall Score: A-

“Returning to a more realistic setting, Makoto Shinaki brings us an intriguing love story complemented by his signature art style”