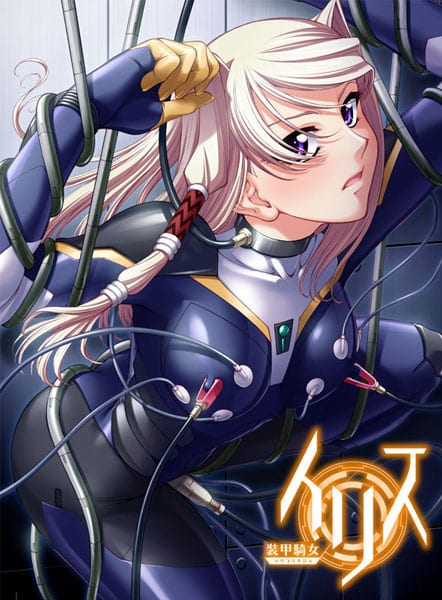 After opening pre-orders for the set last month, international visual novel publisher MangaGamer have confirmed that hardcopy editions of Armored Warrior Iris have begun shipping out from their warehouse.

Also known as Soukou Kijo Iris (装甲騎女イリス), this reasonably priced visual novel was first developed by Lilith in 2006. Priced at $24.95 USD, this title includes the original Japanese voice acting, English subtitles and no mosaics over any naughty bits.

MangaGamer have also shared a detailed synopsis of Armored Warrior Iris, which can be found below:

Set far off in the distant future, where mankind has populated space.

Space has been loosely unified by the Space Federation, a collective with many species participating, including humans.

The protagonist, Iris, along with her partner, Mei Li are beautiful lieutenants belonging to the Soviet Security Force, or SSF. They are fearsome ace pilots, calling the SSF’s Special Armored Company #101 home.

Special Armored Company #101 are a unit that utilize ”Armored Knights”, a mobile humanoid weapon. They have been commonly deemed ”Armored Warriors”, as the commanding officer of the company is a woman, and the majority of the troops are women, as well.

Iris and Mei Li aim to assault and eradicate the rampant human trafficking network present on planet Left, a planet rooted in extreme discrimination against women. Maintenance of public order, typical of police forces, also falls under the SSF’s duties, and the eradication of human trafficking networks is part of the girls’ daily obligations. Although, it is true that such efforts have turned in to a stress reliever for the girls, born from their quirky interpretation of justice: ”Any and everything goes against evil!”

One day, cities opposing planet Left’s space federation unite and a regional dispute breaks out, seeing cities that fall under the federation’s umbrella attacked. The Armored Warriors are dispatched, of course, but during a fierce battle, both Mei Li and Iris’ ships are shot down. Iris awakens to find herself captured by an Orc, which are known as hyenas of the battlefield.
Iris is then brought to the hostile city of Million, otherwise known as Dark Town, as a slave.
She curses the irony of the situation, finding herself, someone that sought to end slave trade, as a mere product to be sold to slave merchants.

What happened to her partner Mei Li, who mysteriously vanished?! What fate awaits for the captured Iris?! Iris and Mei Li’s battle begins in the hellish city where evil is permitted and righteousness is sneered at!

ollowing an announcement by the game's long-time Playstation-console publisher Nippon Ichi Software America that many of the Danganronpa games would no longer be available for purchase...
Read more
Visual Novels