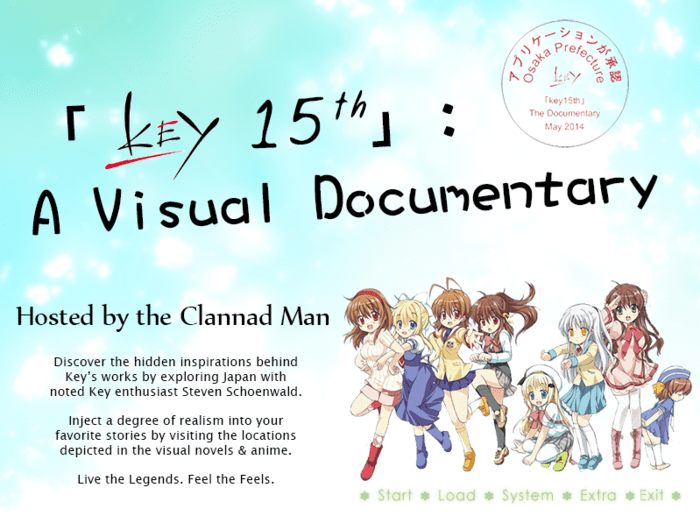 If you have never heard of KEY then you would be forgiven, as to date none of their popular visual novels have reached English-speaking shores, and at the moment their hesitance in breaking into the international market doesn’t sound too promising. However you may have heard of some of their titles as anime adaptations such as Kanon, Clannad, Air and Little Busters!.

I reported on a campaign in July last year about the “15th KEY Anniversary Letter Project”, where the hosts were encouraging international fans to submit their messages, fan art and other goodies for a package to be sent directly to KEY. Turns out that this wasn’t the initiative being undertaken by fans.

Steven Schoenwald, also known as The Clannad Man has recently launched a Kickstarter campaign with a $20,159 goal to produce key15th: A Visual Documentary, which they describe as a documentary that will “discover the hidden inspirations behind KEY/Visual Art’s works by exploring Japan”. The crowdfunding campaign has a number of reward tiers, and has currently raised $2,616 with 46 days left to go.

The only issue that stands between them and success is acquiring the funds and making sure that KEY / Visual Art’s don’t file a DMCA notice as somewhat similar projects have had filed against them in the past. Check out the campaign HERE.