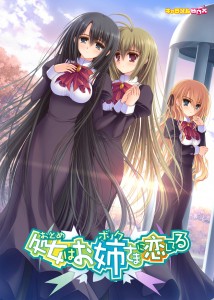 During last years KatsuCon, MangaGamer first stepped up to announce their acquisition of the Otoboku visual novel series. This year they stood up once again to make the announcement that they are planning to do a limited edition release of the title as a hard copy release. This limited edition release is set to come with the game, a special story-book “Tsunderella” which has been fully illustrated in colour by Yoda and an extras disc full of bonus items such as wallpapers, production materials and more.

While they have not yet announced a release date for this edition, they have confirmed production is already underway and that we can “expect to see this on sale soon“. Otoboku, also referred to as Otoboku: Maidens are Falling in Love with Me or Otome wa Boku ni Koishiteru is a visual novel developed by Caramel Box and has since seen releases over several platforms and even an anime series.

There was a break in the usual summer rain. Narrow beams of sunlight kissed the stone walkway through the line of cherry trees. It had rained the night before, and the dew still sparkled on the leaves, which now glistened like emeralds in the breeze. Footsteps and cheerful feminine voices echoed down the short cherry tree-lined lane leading to the school building.

Such a beautiful, refreshing day. “But… what the heck am I doing here?!”

One day, the heir to the prosperous Kaburagi Corporation, a soft-spoken yet cultured young man, received a visit from his family lawyer. He came to pass on the final wish of the boy’s late grandfather: that he attend an all-girls school! With his childhood friend Mariya – a talented fashionista – to help him with the “transition,” Mizuho enrolls in his new school. It’s not long before a series of strange misunderstandings leads to him being elected the school’s “Elder Sister,” the idol of the entire student body! It’s one wild event after another at this all-girls charm school! Can Mizuho make it through the year with his identity – and his dignity – intact?