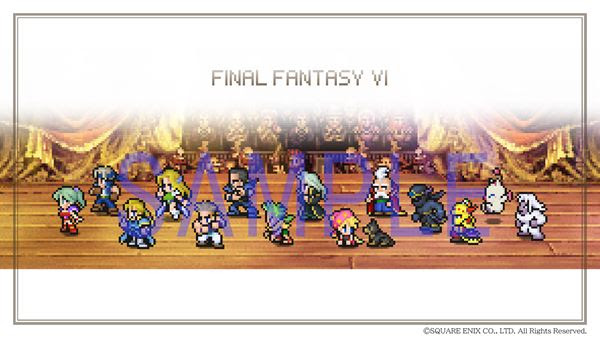 The final of the classic top-down Final Fantasy games released prior to the transition to fully-3D visuals in Final Fantasy VII, Square Enix has today rolled out their new pixel remaster version of Final Fantasy VI onto the PC via Steam, and mobile platforms. In this release, players can embark on the classic journey with improved visuals and audio.

For the first time, FINAL FANTASY VI pixel remaster will also introduce the beloved opera scene in reimagined majesty, including new vocals and animation. Fans can now enjoy the iconic scene with vocals in Japanese, English, French, Italian, German, Spanish and Korean. The voice track language of this scene will be determined by the language selected on the game’s configuration page. While other text languages are available, those who select those languages will default to either English or Japanese.

Other improvements made to Final Fantasy VI include:

Those who purchase FINAL FANTASY VI on Steam on or before March 9 PST will receive early purchase bonuses, including four wallpapers, five music tracks, and a 20% discount. The wallpapers, the instrumental music track, and the timelapse special tracks (which transition from the iconic original versions to the new arrangements) included as early purchase bonuses are also available via the bundle on Steam. The music tracks include:

New to the Pixel Remaster series but are interested in nabbing yourself Final Fantasy I through VI? A special ‘Final Fantasy I-VI Bundle’ is now available to purchase via Steam, the iOS App Store, Google Play Store and Amazon App Store.

Accessibility in gaming is a major talking point at the moment, and with Global...

Following a delay period of a few weeks due to developmental delays which has...

Take hacking to the stars with Star Citizen's latest concept ship - a ship...