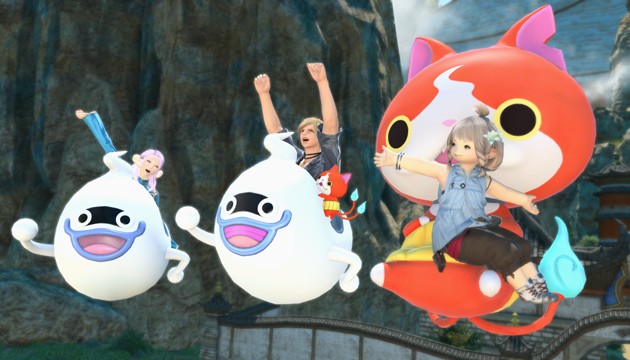 Following the return of the Dragon Quest XI collaboration event in Final Fantasy XIV, Square Enix has released an updated version of their collaboration event with the successful Japanese mixed-media children’s franchise Yo-Kai Watch. Initially held in 2017 and accessible to players from Level 15 upwards, the Gather One, Gather All! event serves as a sufficient time sink for both new and returning players, and is updated to include new minions, weapons and a mount.

Players will follow a short questline starting from Ul’dah, after which they will acquire a Yo-Kai Watch and Yo-Kai Medallium, which can be used to obtain Yo-Kai Medals from FATES. These medals can be traded in at the Gold Saucer to unlock seventeen different yo-kai medals featuring mascot characters of the series such as Jibanyan and Whisper, to others such as Damona and Lord Ananta. Collecting thirteen of them will enable you to summon them as minions and obtain the Whisper-go Mount.

Need some new Yo-Kai themed glamour? During your journey across Eorzea, through participating in certain FATEs while accompanied with the minion corresponding to your desired class, you can obtain Legendary Medals. These can be traded in for special weapons, including those for classes such as Dancer and Gunbreaker which were not available when the event was first run. Should you grind enough to collect all 17 weapon sets… a new, special mount is yours.

Gather One, Gather All! is one of two events currently being run in the online game Final Fantasy XIV. The other is the seasonal Moonfire Faire, which offers summer-themed glamour, emotes and more.