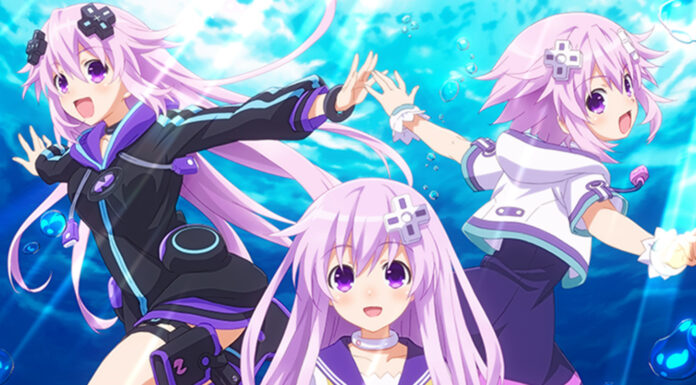 Following Funimation Entertainment’s release of the Hyperdimension Neptunia the Animation TV anime many years ago, Idea Factory International surprised earlier today by announcing that they will be entering the anime market later this year with additional localised Neptunia OVA episodes. These titles will be available as digital-exclusive editions via Steam, encompassing two remastered compilation episodes and a brand new OVA.

Each episode will be available only with the original Japanese voice acting, complemented by English, Traditional Chinese and Simplified Chinese subtitles. Despite being responsible for actually dubbing the Hyperdimension Neptunia video games, Idea Factory International has not indicated any plans to offer even the completely new chapter with English dubbing.

You can read more about each of the episodes, and see some preview screenshots, below:

This episode encompasses Episodes 1-5, 11 and 12 of the TV anime

In a world known as Gamindustri, four Goddesses and their sisters use the power of Shares to rule over their respective nations – the Goddess Neptune of Planeptune, Noire of Lastation, Blanc of Lowee, and Vert of Leanbox.​​

Though originally in competition, the Goddesses formed a Treaty of Friendship to bring peace to the land and free up time for them to do what they enjoy. However, nefarious crime syndicates, rival Goddesses, and a bevy of ne’er-do-wells will test the strength of their relationships and their very existence. What awaits the Goddesses, and will Neptune ever get a chance to clear out her gaming backlog?!​​

This episode encompasses Episodes 6-10, 13 of the TV anime

What happens when more than one version of Gamindustri and its Goddesses are revealed to exist, and what awaits the Goddesses when the fate of the two dimensions become intertwined? Hopefully, there’s pudding at the other end of this dimension…​​

While a completely new chapter in the TV anime canon, the appearance of an older Neptune indicates it has some links to Hyperdimension Neptunia VII.

The Goddesses and their sisters take a break from the hustle and bustle of nation-ruling with a quick camping trip to “My Summer Vacation Mountain.” When Nepgear, Uni, Rom, and Ram go for a walk, they pass through a series of shrine gates and…end up in another dimension?!​​

There they meet someone that looks like an older version of Neptune! What shenanigans will ensue, and can the sisters ever get back home? Are two Neps better than one?​

Ahead of TRIGUN STAMPEDE debuting to the world in January 2023, CrunchyRoll has confirmed...
Previous article
My Amazon Pre-Order of Prinny 1•2: Exploded and Reloaded Has Been Cancelled? – NIS America Responds
Next article
Yo-kai Watch Collaboration Event Returns to Final Fantasy XIV: Gather One, Gather All!
Twitter Youtube
© The Otaku's Study