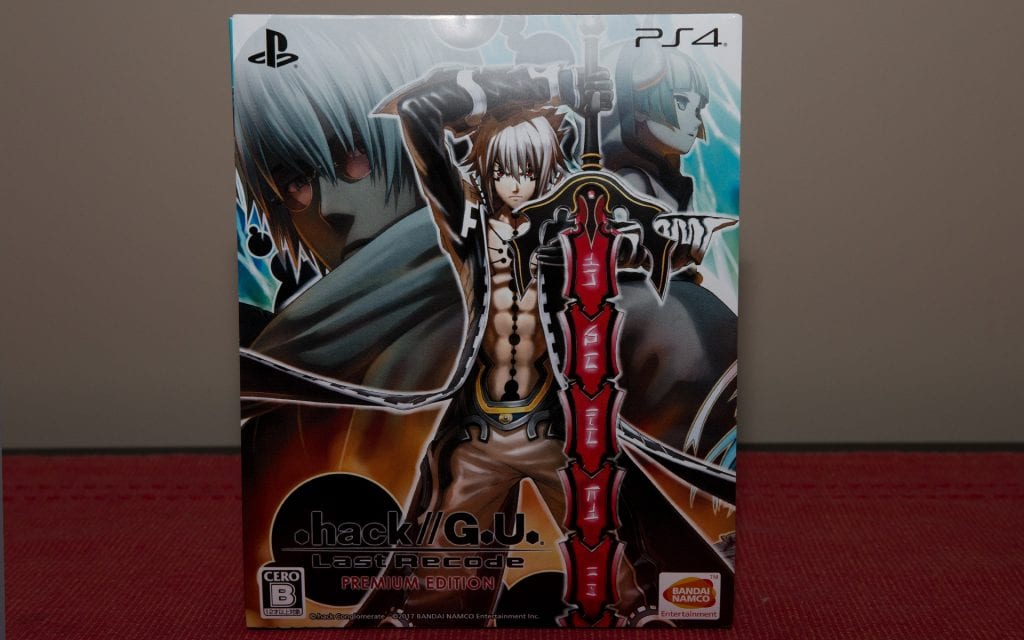 To mark the 15th anniversary of their .hack media franchise, Bandai Namco Entertainment released a enhanced HD remake of their second PlayStation 2 exclusive video game trilogy in the series, .hack//G.U. Going by the title .hack//G.U. Last Recode, this was more than a mere port with fancier visuals, going so far as including a fourth (albeit smaller) chapter which ties up loose ends left unresolved for years. Those of us outside of Japan did not miss out on any of the core game content when it came to our English release, with the fourth chapter even being dubbed by many of the game’s original voice cast.

What we did miss out on however was the chance to pick up the game’s Premium Edition, which was made available exclusively in Japan on the PlayStation 4. On a whim I opted to purchase this edition, at a time where I did not expect Last Recode to be released outside of Japan, retaining my order out of curiosity. So the question is… did we miss out on much by only having standard edition offerings? Keep reading for my unboxing of the Japan-exclusive Limited Edition of .hack//G.U. Last Recode. 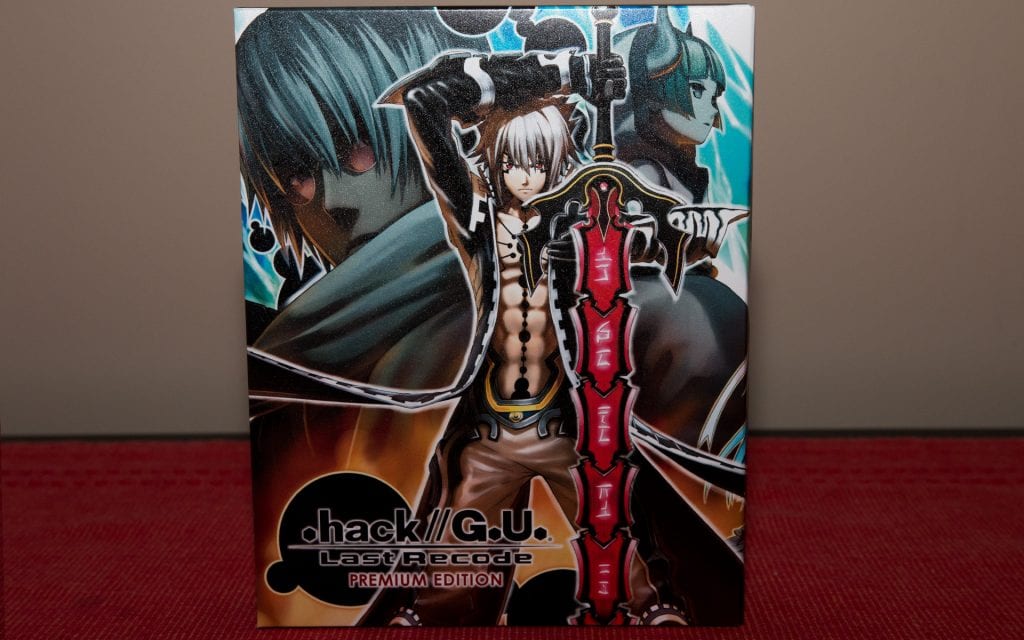 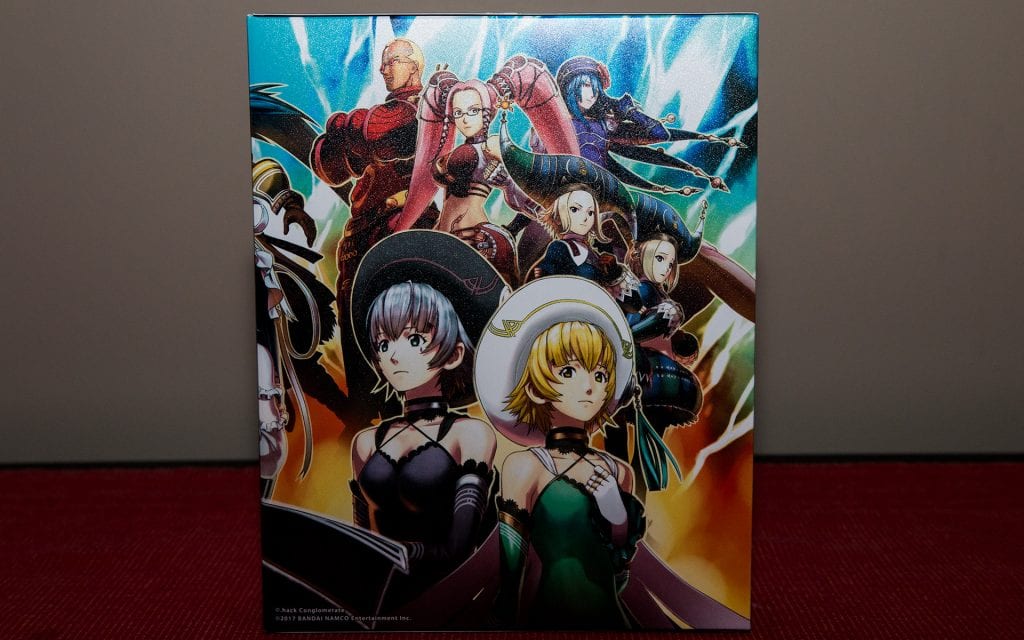 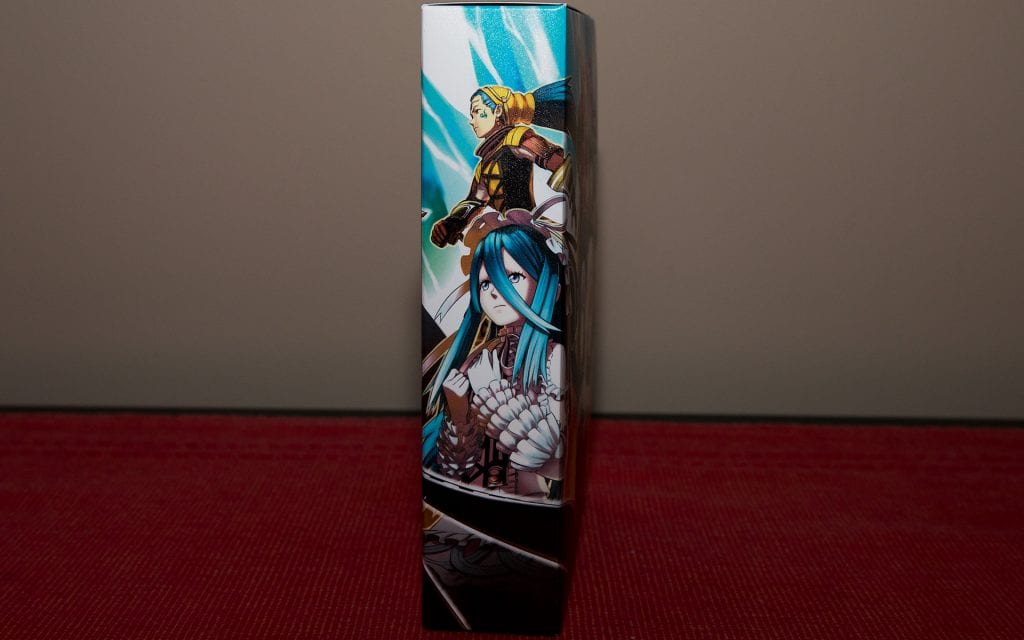 All the contents of this previous edition are contained within a nice box, bearing artwork clearly created for the all-new four chapter (with its front cover featuring Haseo in his newest form, Ovan, and the mysterious new character players will encounter early on). This is a single piece of artwork which wraps around the box, and while it is less practical for storing given there is no logo on the spine, there is no awkward character placement of any characters.

The box itself shares its height and width with a standard PlayStation 4 game case, so don’t go expecting any massive artbooks or bonus goodies from this collection. However, it is very sturdy and of a high build quality compared to similar cases I own. This is packaging I would expect to be resistent to general wear-and-tear, and look forward to seeing it in my collection in such good condition for many years in the future. 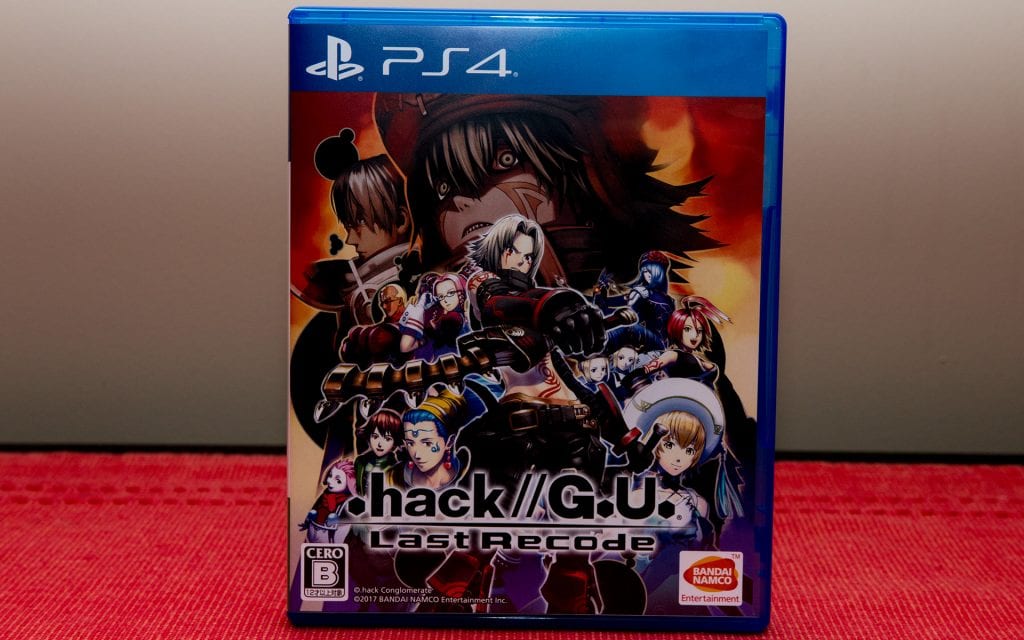 Offering no creative way of presenting the game disc to purchasers, this collection comes equipped with your usual PlayStation 4 game case and disc.

For those interested in this collection and the Japanese release, it differs very little from the English language version published by Bandai Namco Entertainment back in November 2017. With all the game text being in Japanese, the most notable omission is the inability to switch audio languages. This means that you would need to understand Japanese to follow the story, unlike the English release where you could enjoy either the English dub or original Japanese audio with subtitles.

Other than the language differences, all four titles in addition to the Parody Mode and Terminal Disc are included on the one disc. 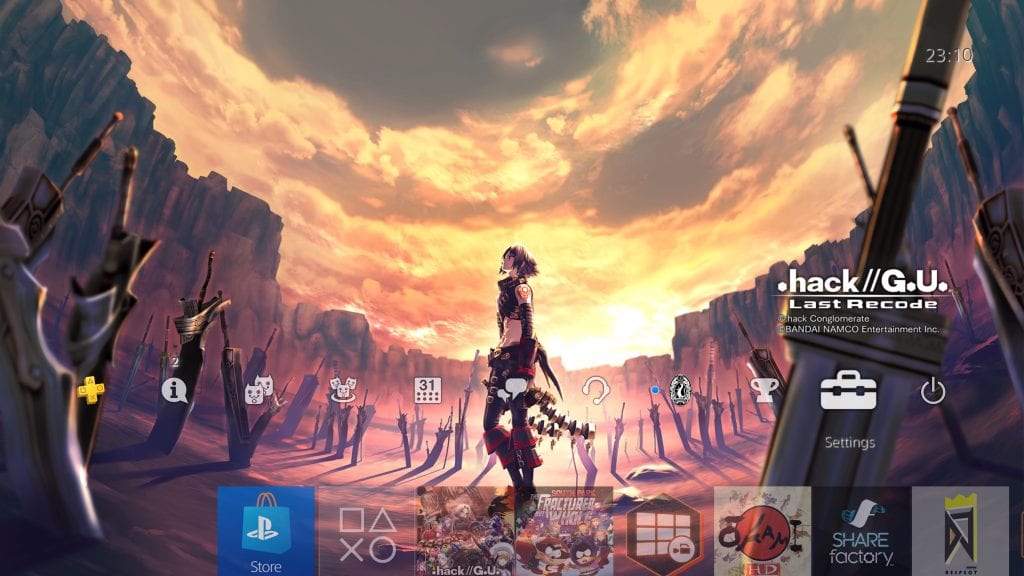 While there is little else of physical substance contained within the game case, there is a leaflet with a download code for a PlayStation 4 theme I have not seen available elsewhere. Visually, the theme consists of two static images featuring Haseo, and a handful of icon changes. The artwork is very pleasing, but what made this theme stand out to me was its inclusion of .hack//G.U. Volume 1’s theme song – Yasashii Ryoute featuring vocals by Tomoyo Mitani. It is a beautiful song I felt was underutilised in the game itself, so it’s nice to at least have the option to enjoy it prior to loading up a game. Unfortunately however, there are more creative themes out there… meaning it is a bonus at least I won’t be using. 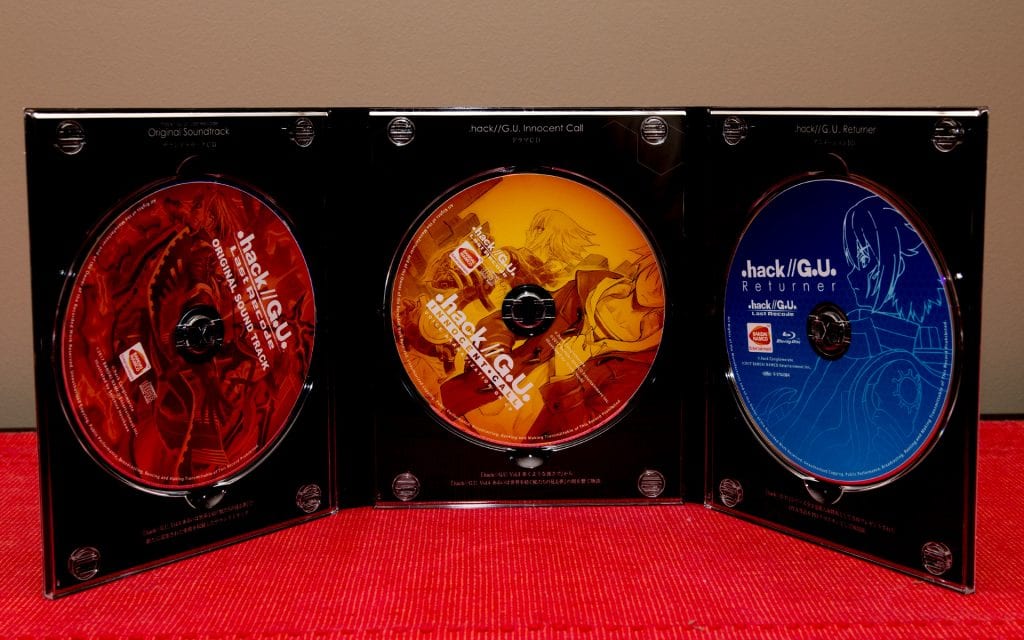 Arguably the most important inclusion in this set are the three bonus discs, which consist of the following:

Left: The first CD disc contains an original sound track. Unsurprisingly given how many songs are featured across the .hack//G.U. tetralogy, this is not a complete soundtrack. It is instead a collection of fourteen songs, including the new song ‘Come back to The World’ performed by LieN which encompasses much of what made .hack//G.U.’s lyrical songs so memorable. It is a nice soundtrack overall, and something worth putting on your MP3 player.

Centre: The second CD is a drama CD known as .hack//G.U. Innocent Call. This is purely in Japanese, so its appeal will be based on your capacity to translate or an English script eventually being made available.

Right: The final disc is a Blu-ray copy of the OVA episode .hack//Returner which back in the day was only available in Japan to those who purchased all three PS2 copies of .hack//G.U. Similar to .hack//Unison with the original set of games, this is an epilogue of sorts which brings together the characters of the TV anime (.hack//Roots) and video game (.hack//G.U.) in one episode. Animated by Bee Train, this episode features core characters from both, while offering cameo appearances of many others. That said, its canonicity / place in the .hack// timeline is debatable considering the new chapter. The episode was decent enough, although nothing special. 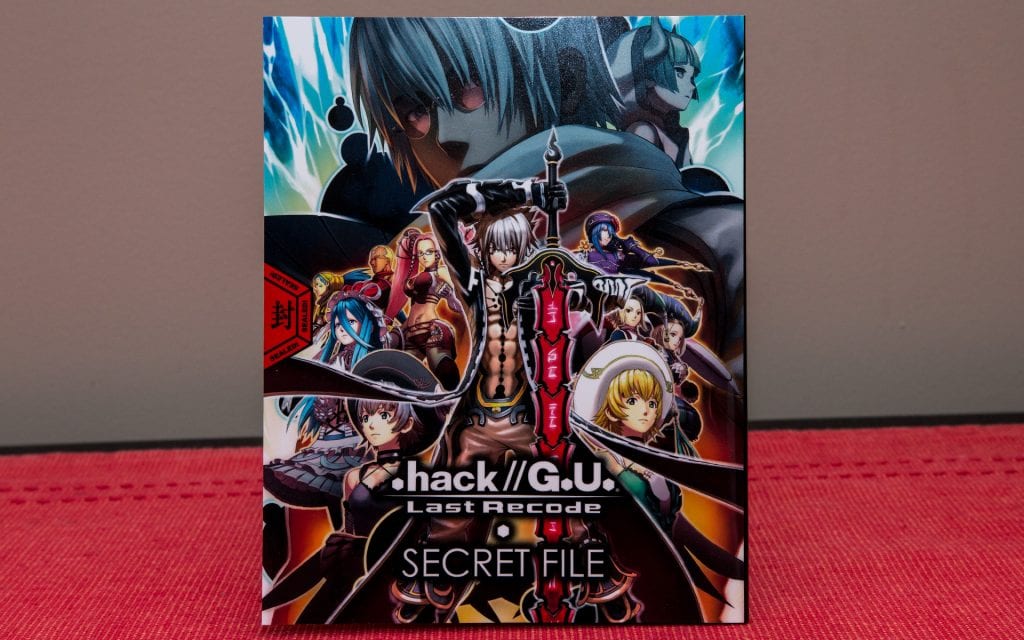 The .hack series typically sticks to the events taking place in whichever version of The World the game, anime or manga instalment takes place in. Therefore with a few exceptions, we don’t get to see the faces of the players behind the avatars. The final item in this Premium Edition collection is the “Secret File”, a light novel style book featuring small chapters surrounding some of the people Haseo plays alongside. Known as .hack//G.U. Ragtime, this book features short stories and artwork of the players behind Alkaid, Enderance, Kuhn, Sakubo, Silabus, Yata and Piros. Like the drama CD, you would get the most out of it by either being able to read Japanese or an English localisation being available in the future, but the scattered artwork is nice at the very least! 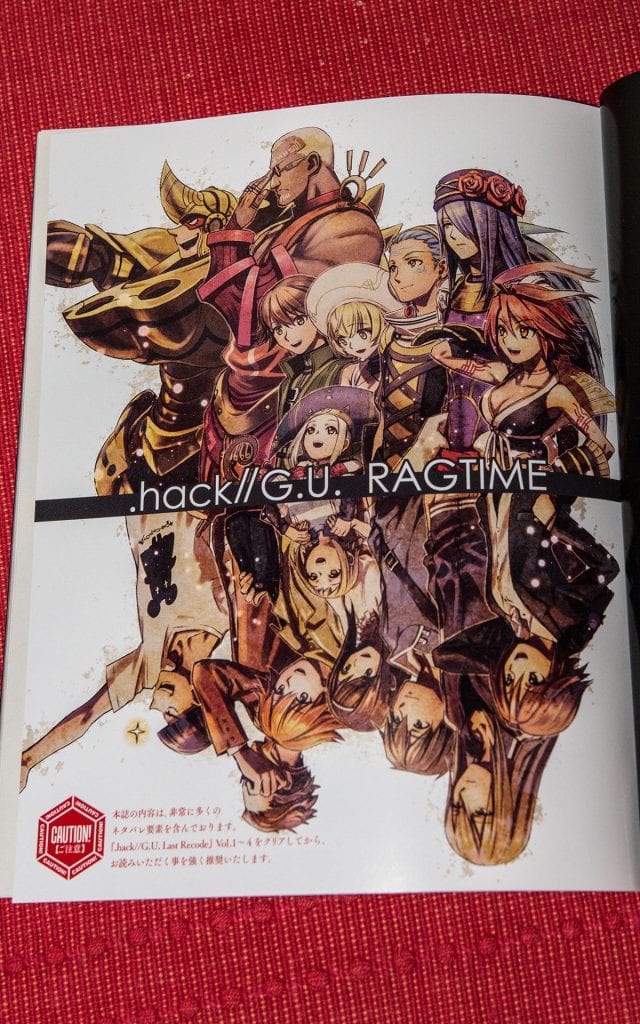 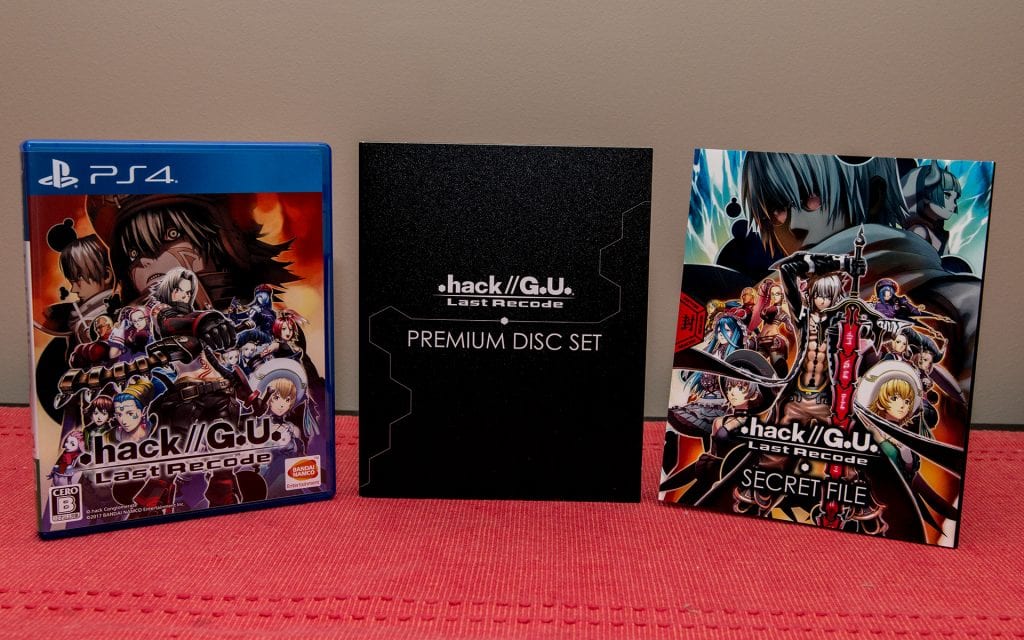 Given the price difference between a standard Japanese edition of .hack//G.U. Last Recode and this Premium Edition, I am content with the bonus items I received. The anime is decent, the soundtrack is good albeit with a small tracklist and I did enjoy scrolling through .hack//G.U. ragtime. The packaging was also good, and something I will display prominently on my gaming shelves at least for a couple of months. But that said, unless you can understand Japanese good enough to play this version at the exclusion of the official English release, there wasn’t anything to justify a second purchase.

While I can understand Bandai Namco Entertainment not wanting to pool resources into an English dub of the drama CD, I feel that the other items such as the theme, soundtrack and Ragtime book at least would have made good items to justify an extra $10-15 towards my purchase of the NA/PAL version, if not a pre-order bonus.

That said, with .hack//G.U. never receiving an official Australian release, I am still surprised we managed to get the game on shelves ten years later.