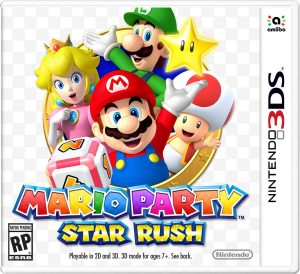 Offering a great combination of board game and minigame elements, I remember falling in love with Mario Party on the Nintendo 64 back in 1999. For more than a decade and a half now, Nintendo have worked with this franchise, releasing ten numbered installments and a range of side-games. While I don’t think recent games have managed to live-up to the charm of earlier works, it is nevertheless exciting to wait and hope for the next big game.

While time will tell if it manages to be renown as the next great Mario Party game, Nintendo have unveiled that work is ongoing for a new instalment titled Mario Party Star Rush. Described by Nintendo as the “most perfectly portable Mario Party game to date”, up to four players will be able to play together, exploring different Mario-themed worlds. Unlike past instalments, each player takes control of a Toad, and travels across maps to recruit Mushroom Kingdom allies.

One new addition is that there is no turn order for dice rolling, with all players rolling simultaneously. It is up to players to think quick on their feet, as they plot strategic paths to move.

Mario Party: Star Rush is currently in development by Nintendo for release exclusively on the Nintendo 3DS family of systems. It will launch on November 4th 2016.