The Witch and the Hundred Knight: Revival Edition Now Available in Australia and New Zealand 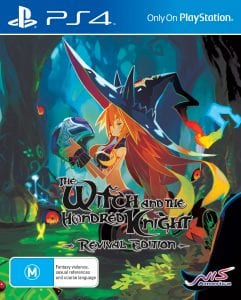 Following the enhanced ports release in both North American and European markets, Nippon Ichi Software America alongside Australian-based distributor Bandai Namco Entertainment Australia have confirmed that The Witch and the Hundred Knight: Revival Edition is now available for purchase digitally and physically in Australia and New Zealand.

Following the game’s original PlayStation 3 release in 2013, this enhanced port includes updates (including hopefully fixing the noticeable bugs) and the ‘Tower of Illustion’. The Tower of Illusion is a new dungeon which can be accessed by offering a weapon, with greater weapons providing greater opportunities to encounter strong enemies and more enticing loot. While you will enter the tower as the Hundred Knight, building “Concentrated Mana” will allow players to summon Metallia for a limited amount of time – who comes with a range of powerful skills befitting her title as a witch. This is the only time players will be able to play as the lead heroine.

About The Witch and the Hundred Knight: Revival Edition