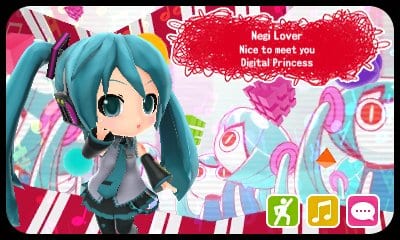 With less than a fortnight to go before their English localised release of Hatsune Miku: Project Mirai DX begins rolling out onto store shelves, SEGA have shared a new batch of screenshots for their upcoming rhythm game.

Given Hatsune Miku: Project Mirai DX is a Nintendo 3DS exclusive title, the developers have added StreetPass functionality to it. One of these features allow players to create their own Miku tune using a variety of instruments including vocaloids, traditional instruments, synthesizers and chiptunes. The sounds and keyboard can be used to create a four-bar tone that can be shared with anyone using StreetPass. As you change your individual tune, the friends you StreetPassed with will receive an update over SpotPass.

The screenshots also highlight the ability to create an individual profile card, which can be customised by selecting a variety of backgrounds, looks and character poses. It is also possible to further customise it by creating a tagline, writing your own message and more as options are unlocked through gameplay.