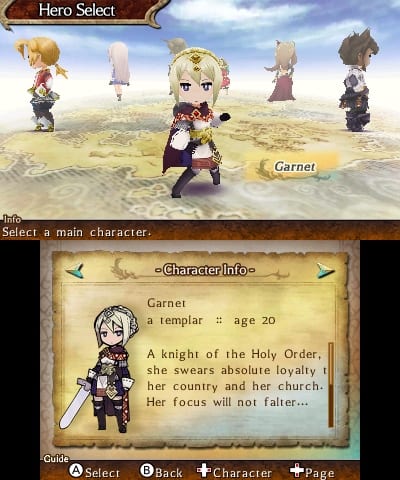 While this shouldn’t come as a surprise to JRPG fans given how well ATLUS USA kept their plans for this title a secret, ATLUS USA have finally confirmed that they will be publishing The Legend of Legacy in North and South America during the Holiday Season of 2015. Available exclusively on the Nintendo 3DS, this game has been developed by what ATLUS USA have described as a “core group of legendary developers” – with titles between them including Chrono Cross, Chrono Trigger and Final Fantasy XIII.

In The Legend of Legacy, Seven adventurers – Liber, Meurs, Owen, Bianca, Garnet, Eloise, Filmia – arrive on the mysterious island of Avalon to pursue their own agenda as explorers. They team up with two of the other adventurers to achieve  their objectives – be it exploring the island for treasure, looking for the “god” on the island, or recovering  lost memories. But things change when they discover a singing stone that causes the party to see phantasms of Avalon’s forgotten history.

The Legend of Legacy features turn-based combat, however players will have the option to create their own formations tailored to their party of three, meaning each party member can be put into a different combat role (defending, attacking, supporting, etc.) at any given time.

One little concern for those after the core Japanese experience is that ATLUS USA have hinted at the game being “Balanced for the West” which was based on user feedback following the original release in Japan. Although they have claimed that more details will be released about this at a later date, they have hinted that several gameplay adjustments have been made to “enhance the gameplay”.

Developed by FuRyu and published in the North America, The Legend of Legacy is set for release in North America and South America at a date yet to be confirmed. No company has come forward with PAL release plans either.