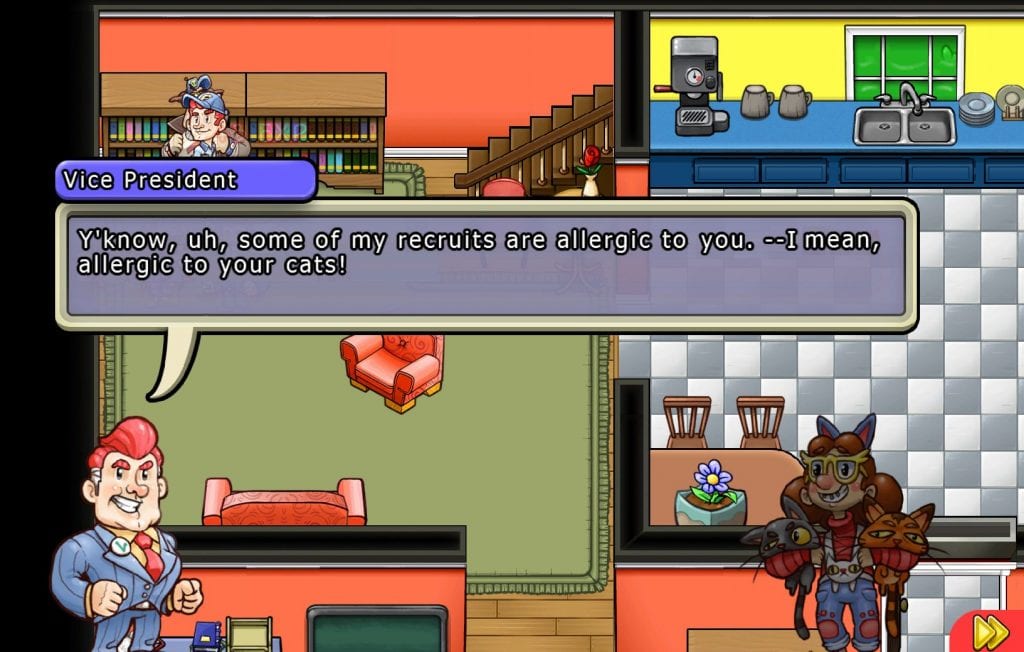 Citizens of Earth from Eden Industries is a video game which highlights the fact that failing a crowdfunding campaign isn’t necessarily the be all and end all of a particular concept. After raising a little more than a third of their original $100,000 CAD Kickstarter goal in 2013, the development team opted to collaborate with publisher ATLUS USA – who have also worked with other indie development teams in the past such as ACE Team (Rock of Ages) and Phantom Compass (Rollers of the Realm).

Fast forward to 2015 and gamers have finally been able to sink their teeth into a game that portrays itself as being a retro inspired RPG with a quirky storyline and filled with political satire. While these elements are consistently present, the end product only manages to provide an adequate experience that is unfortunately hindered by sluggish pacing and a plot that sometimes overdoes the comedy at the expense of being coherent.

Citizens of Earth casts you as the eccentric and narcissistic Vice-President of the World. After having clawed his way into the second highest position in the world with a gung-ho attitude and a ginormous smile, he decides to go back home to his mother’s house and enjoy some R&R. This quickly changes when a number of oddities begin occurring around the town – a major swarm of protestors have begun banging on your door for no apparent reason, sentient coffee beans have begun roaming the town streets and some weird and downright absurd creatures have called the town’s outskirts home. Enthusiastically seeking to discover the cause of this unusual string of events, the Vice-President leaves the comfy confines of his bedroom to recruit allies and begin his journey. Or to be more specific… stands behind a party of three allies and lets his mother, brother and/or 38 characters do the job for him. 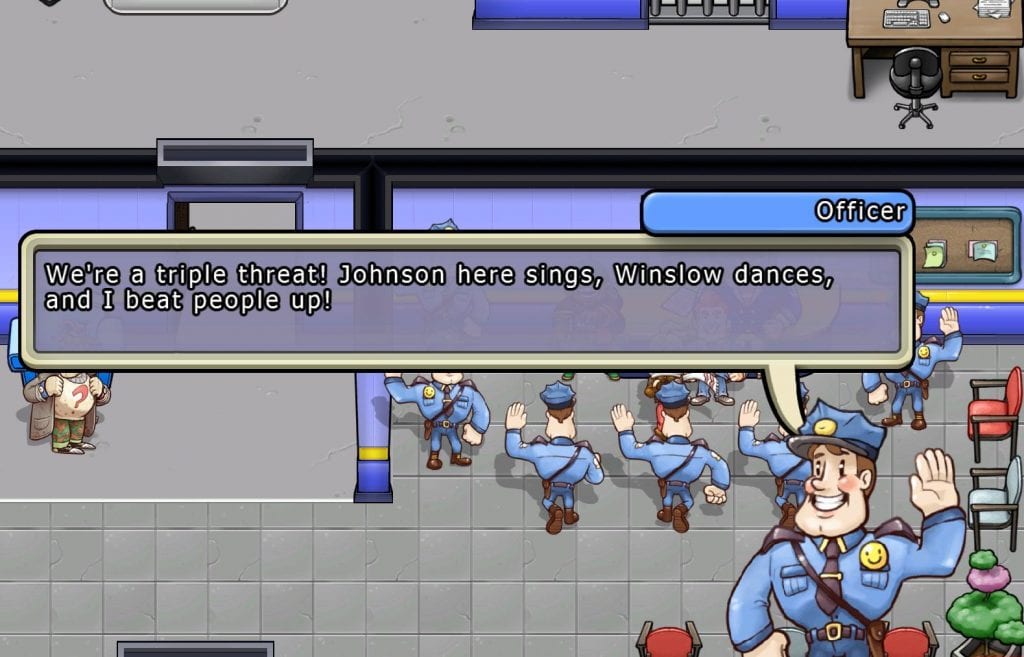 The dialogue in Citizens of Earth is genuinely entertaining and could easily be considered one of the game’s highlights. The script is filled with a creative array of political satire, pop culture references and one-liners that on many occasions were worthy of a smirk or chuckle from myself. The quality of the humour didn’t depreciate as the plot went on either, with comedic creativity evidently being a strong-point of the development team.

While they may occasionally seem like Party Member X, Y and Z when it comes to the battle system each of the forty party members you unlock along the way also contribute their own distinct personalities into the mix – from the kitten-obsessed girl to a conspiracy theorist wit hish trademark coat and question mark shirt. While not every moment in Citizens of Earth fully embraces each individual character’s personality, which is fair considering that the main storyline has to factor in various party combinations of three characters throughout, each character looks and feels unique from the other thirty-nine on offer. 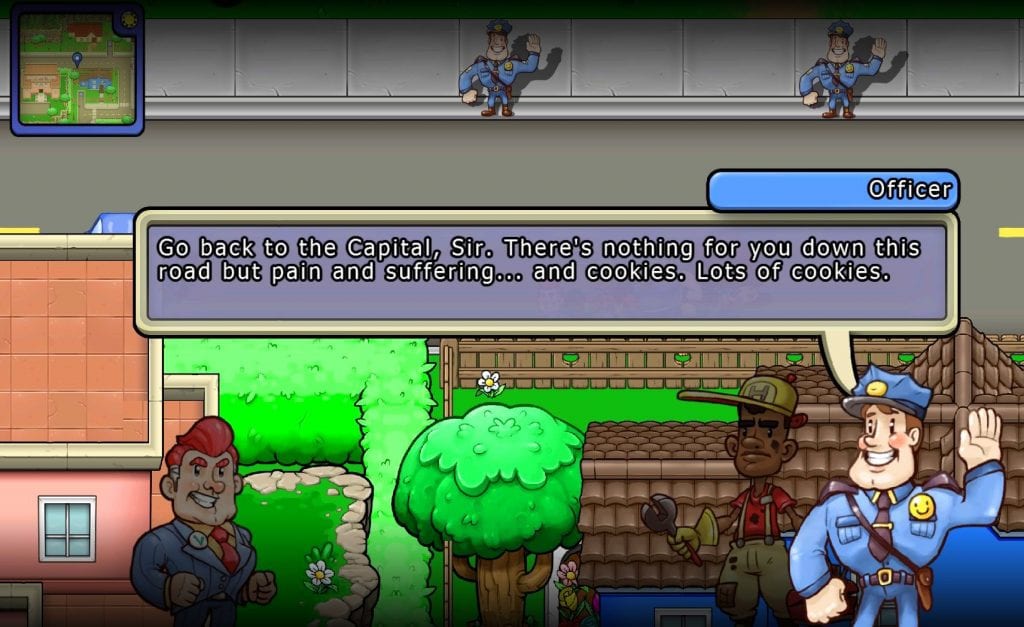 While the dialogue is quite entertaining, this is unfortunately where my praise for the Citizens of Earth storyline comes to a close. Although the quirky humour managed to somehow drag me along until completion, I wouldn’t say the storyline itself was particularly enjoyable or notable. Events such as the Vice-President bickering with the opposition leader or discovering a mystery behind the local “Moonbucks” chain were decent and sometimes worked well with the overall concept they were working with. However the overall storyline felt like a mish-mash of ideas that needed more coherence to be memorable. This aspect wasn’t assisted by the game liking to provide vague hints about your next destination and a number of tedious sub-quests associated with unlocking each of your party members. The Vice-President may be the second most powerful person in the world and willingly orders his party in battle, but is unable to recruit anyone other than his mother and brother without something in return.

I also have no issue with a video game padding a little bit of the content here and there to prevent a gamer from simply taking a linear route from A to B – however a compilation of bland quests really made Citizens of Earth feel more sluggish than a consistent pleasure to play. This is a real shame as alongside the dialogue, there were so many hints and little moments throughout which indicate that Eden Industries could have come out with an incredible comedic storyline, rather than a pretty average one with pacing issues. 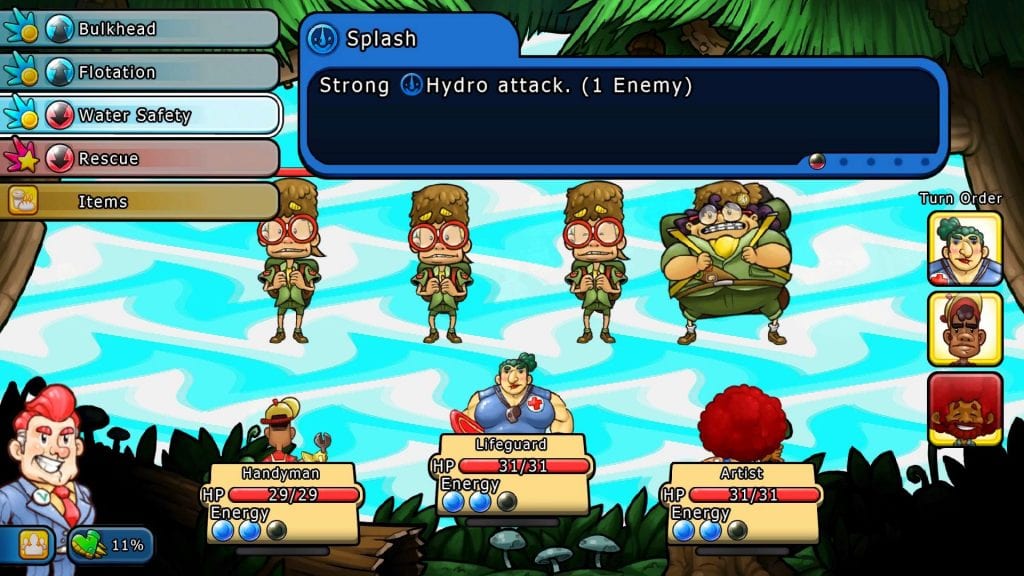 As many other reviewers have also noted, the gameplay of Citizens of Earth is reminiscent of the beloved 90-00’s JRPG series ‘Earthbound’. While the development team have managed to replicate some elements of the battle system renown, it nevertheless ends up being an inferior experience but overall averag to what HAL Laboratory et al. delivered gamers many years and gaming generations ago. That being said, it is not terrible by any means.

The battle system sees the Vice-President cowering behind his three party members, who are unable to act until he barks orders at them. Each character has their own unique attacks based around their own personality, and have enough distinctiveness that there is at least some strategy involved in selecting your party members. Each also have a unique skill different from anyone else that can perform an in-battle and/or out-of-battle action. For example, the Vice-President’s brother can order items through FedUPS and have them delivered after a certain period of time while the Conspiracy Guy carries a Monster Almanac with himself. 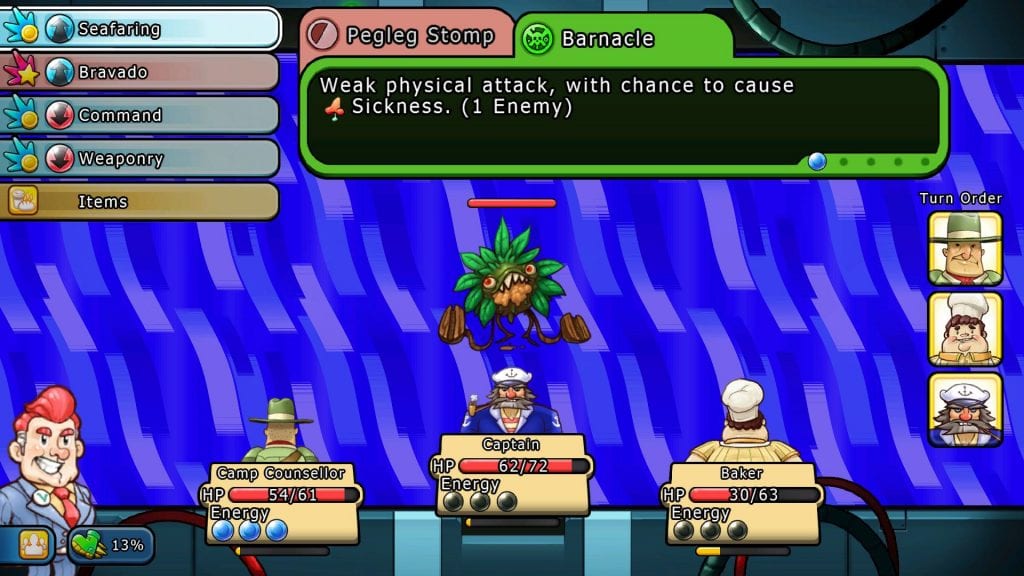 The battle system is turned based, which sees each of your party members use one attack per turn against one or multiple foes. This is complimented by the usual assortment of systems you tend to find in a normal RPG battle system such as attack elements, stat boosts/drops, critical hits and a rudimentary leveling/experience system. However one of this issues is that the use of stronger attacks consumes a character’s limited supply of energy which is obtained by either using an item or performing weaker attacks. Considering that even generic enemies can often take a few hits before being taken down, this means that even normal battles tend to take longer than your typical RPG.

I have two minds about this decision. Firstly, this does make for some rewarding and challenging boss fights unless you spend a considerable amount of time grinding your party. On the other hand, the length of normal battles can make battling in general become tedious incredibly fast. After all, the last thing you want to do in an RPG is groan about having to walk to the other side of town. This tediousness is only exacerbated by the fact that several maps tended to be littered with enemies that can be quite hard to avoid at times. There were times when it felt like I was being left to endure the same experience introduced by Earthbound’s anti-piracy measures back on the SNES. 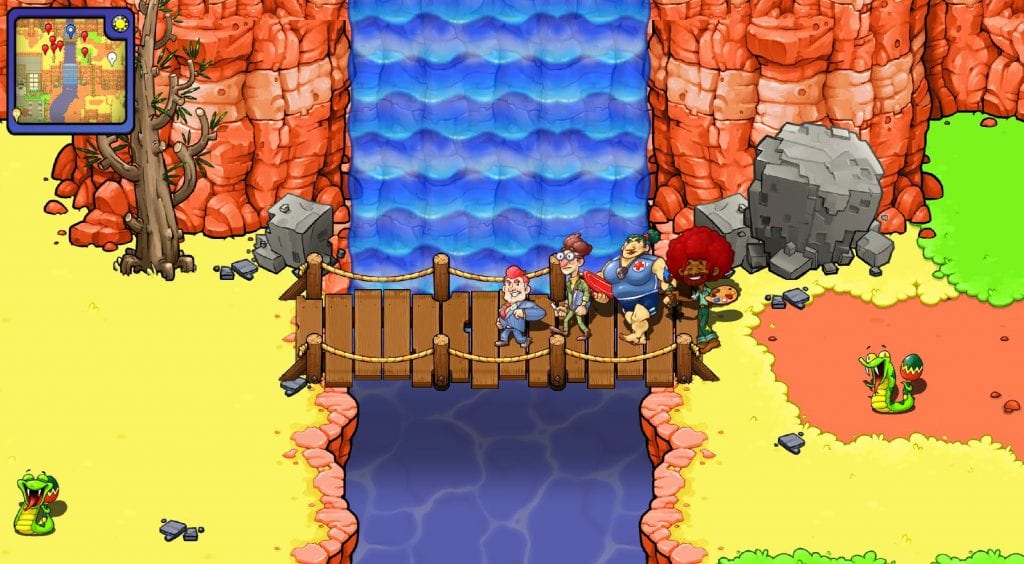 Another element that did work in the favour of Eden Industries was the overall production value of Citizens of Earth. The character/enemy designs both on the field and in battle were well designed / distinct, while the environment was also creatively laid out and vibrant. The aesthetic appeal was complemented by a solid soundtrack and some great English voice acting.

Overall, while Citizens of Earth does a respectable job at producing genuinely unique characters and a comical experience, it was the sluggish pace and tediously slow battle system that turned it from being a promising experience into one that was little more than “just average”. While not all the elements worked together, it was clear from the production value and dialogue that Eden Industries did put a lot of heart and effort into this game, and I really look forward to seeing what they can offer us in the future.

A review copy of Citizens of Earth was provided by ATLUS USA for the purpose of this review. This review is based on the PlayStation 4 edition, and there may or may not be some differences in other versions not covered in this review.