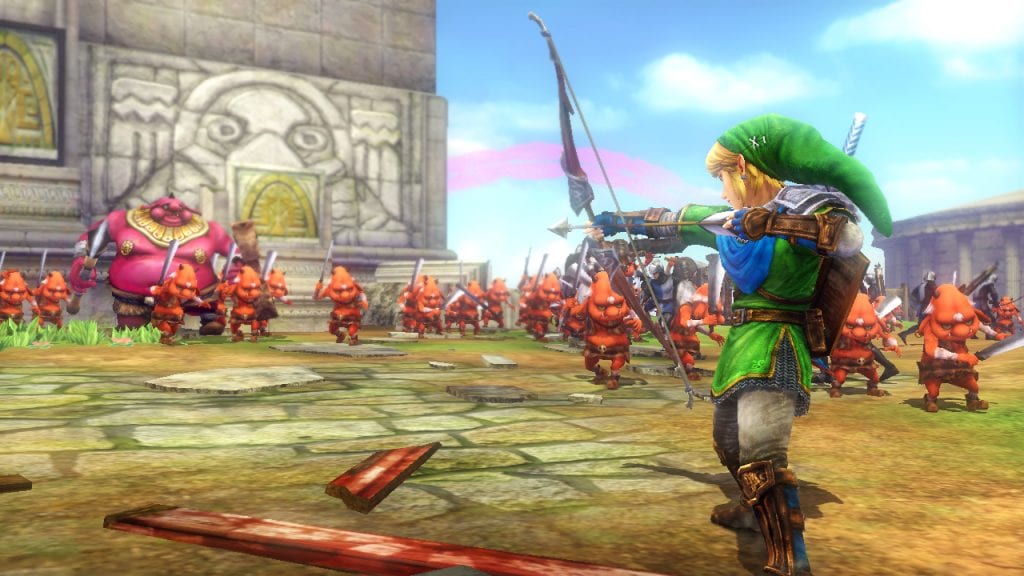 Since first launching on the Famicom back in 1986, The Legend of Zelda series has long been a trustworthy and highly renown series for anyone looking for an enjoyable action-adventure game. Irrespective of what console the game was developed for and with the exception of a few spin-off titles / guest appearances, the gameplay has remained consistent with its love of a wholesome array of weapons, challenging dungeons and distinct plot that are memorable and still talked about years later.

Hyrule Warriors shifts the traditional formula by amalgamating it with the battle system found in Omega Force’s Warriors / Musou line of games including Dynasty Warriors and Samurai Warriors. Gone are the multi-roomed dungeons and side-quests, replaced by dozens of enemies on screen at one time and a consistent barrage of of the fly requests and quests. It was a risky collaboration in my mind considering the traditional action-adventure gameplay has become ingrained with the franchise, and where the perception of some gamers could be that you are mindlessly button mashing for ten – twenty minutes each stage and doing nothing substantial. If you look past its short length and “button-mashing” gameplay however, there is some enjoyment to be found in its dozen-hour plot. 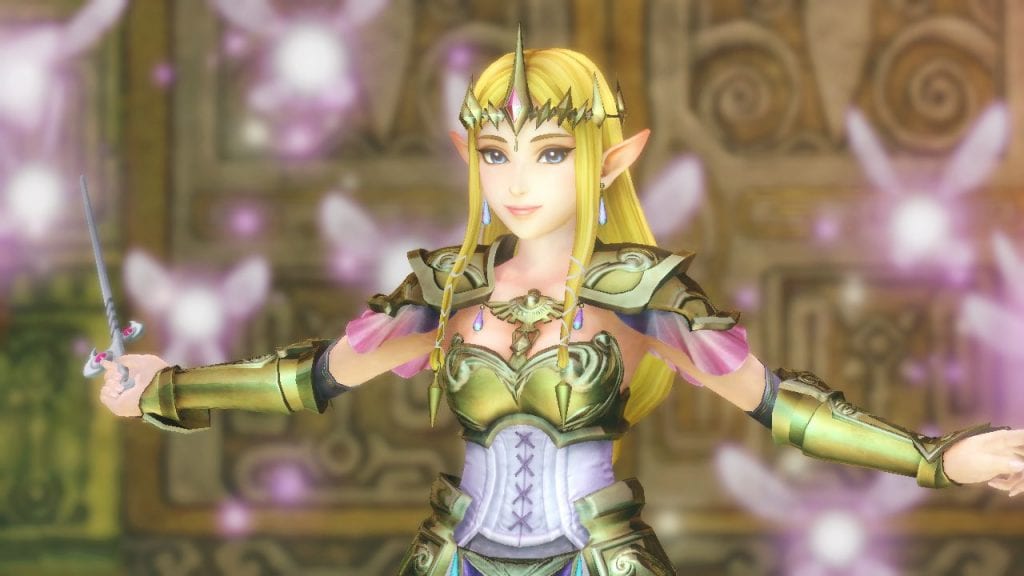 Those who have a copy of The Legend of Zelda: Hyrule Historia can put it away, as it will not help you plot Hyrule Warriors in the timeline. This is a non-canon crossover tale which has no correlation to any other release in the franchise, which has allowed the writers to cross over into different installments in the franchise (Specifically Ocarina of Time, Twilight Princess and Skyward Sword) and choose characters and themed battle areas to incorporate into the plot. During the main campaign, you will join and take control of several familiar characters including Darunia (Ocarina of Time), Midna (Twilight Princess) and Fi (Skyward Sword) in addition to several others.

The plot of Hyrule Warriors itself is a fairly clever merger between The Legend of Zelda and Dynasty Warriors series. Link is now an ambitious soldier-in-training with recognized potential, and is further identified as the potential legendary hero when he aids Impa and Zelda when Hyrule Castle comes under attack. But when Zelda disappears after the others fall for a diversion laid by the enemy – Link, Impa, the sorceress Lana, the mysterious Sheik and others they come across after journeying through time and space go searching for her while seeking to put an end to the individuals behind all the attacks.

While not up to the standard of other Legend of Zelda storylines, Hyrule Warriors delivers an adequate plot that is filled with small references to previous games. These references remain small for the most part, and don’t infringe upon the game’s integrity as a proper installment in the franchise rather than being something simple to earn points for being nostalgic.  The story is incredibly short however, and would have been much more enjoyable were there another few chapters that would allow the writers time to expand upon the characters and setting better without rushing so much. Dynasty Warriors games may choose to expand certain events by cutscenes and might not be known for having the longest storylines, but this was something that didn’t need to be replicated in this game. A few more characters from other Zelda games (Eg. Kafei [Majora’s Mask] – who has technically been a playable character in a Zelda game) wouldn’t have hurt either. 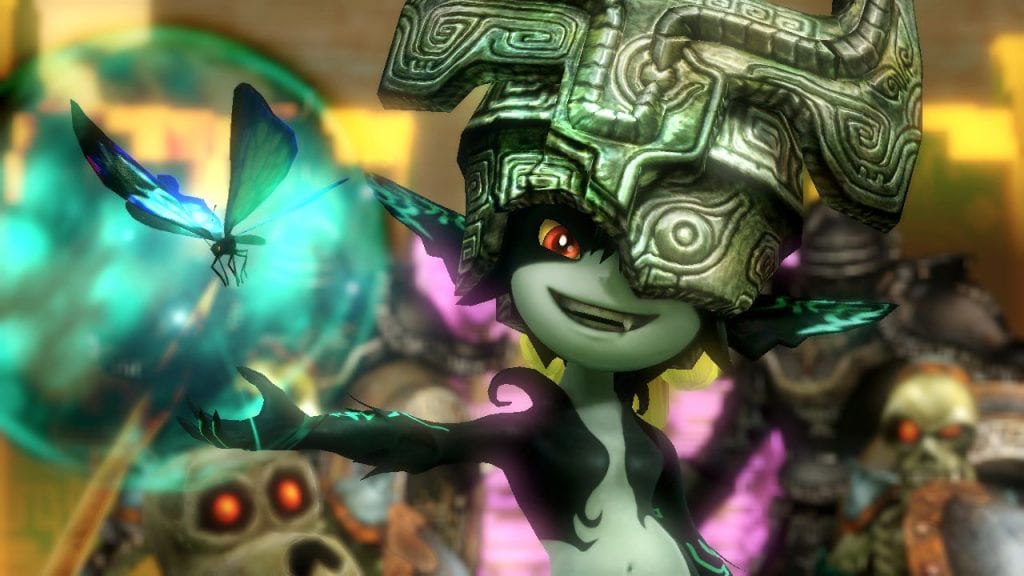 Hyrule Warriors features a grand total of thirteen playable characters, all of which look great. Every character model is incredibly detailed (and replicated where applicable), with a consistently high standard of animation across the board. Environment designs, as with most Dynasty Warriors games is pretty average, but it was nice to see how each of the crossover worlds were designed – with a couple of key areas from each of the aforementioned games receiving a battle field adaptation. They even pay homage to the Lakeside Laboratory from Lake Hylia which was a nice addition. Unfortunately, the replicated peons and enemies are uninspiring and nothing that could be considered attention grabbing. Lag wasn’t a major problem when playing single-player, greatly improved from the framerate frustrations provided by Warriors Orochi 3 Hyper.

Hyrule Warriors features a few new tracks in addition to remixed versions of classic Legend of Zelda songs given the traditional “Dynasty Warriors” twist, often given a faster rock-style beat to them. Listening to the Legend of Zelda theme song upon starting the very first battle helped get me pumped to jump into the game – and things only got better from there.

Aside from the clear and coherent female narrator, there is no voice acting for any of the characters aside from their regular grunts to indicate whom is speaking at the time. While there has never been voice acting in any Legend of Zelda release before (80’s cartoons aside), now would have been an appropriate time to begin. Especially on harder difficulty settings, your attention tends to be dedicated towards the battle field rather than reading text that pops up briefly at the bottom of the screen. Having it read out would not only make things a bit easier to comprehend on the run, but would help add a bit of life to the environment. When you have characters making the same grunt for “Happy” and “Frantic” and nothing but a static image to go on, it is hard to get a sense of mood. 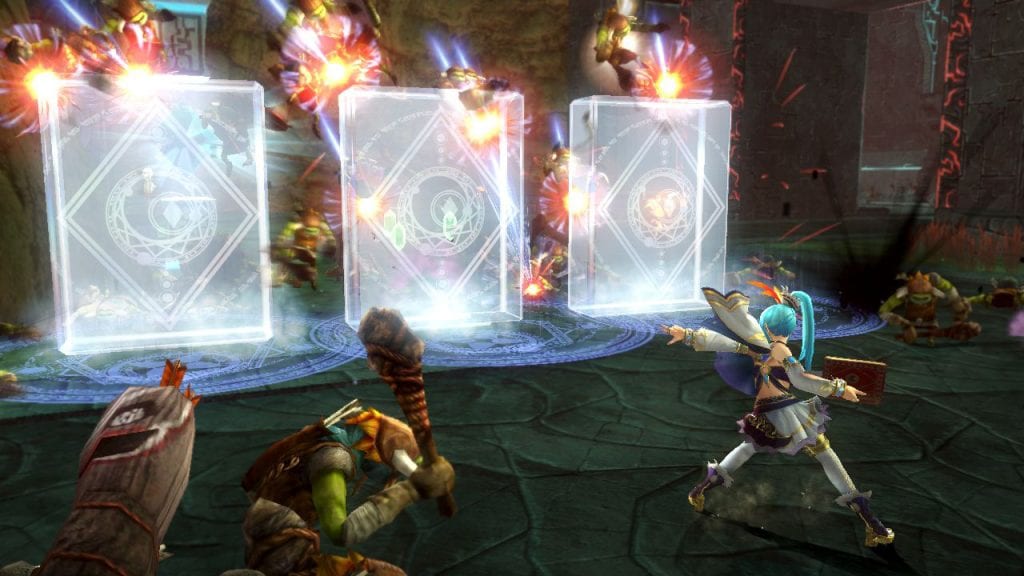 The core gameplay mechanics of Hyrule Warriors is essentially the same as any other “Warriors” game released in recent years. You take control of your chosen hero (Link or someone else) as you plow your way through a battlefield acquiring bases, undertaking missions and taking down the occasional powerful enemy or boss creature. Most of the enemies you go up against will not be standing for more than a few seconds after coming into your hero’s line of sight, and are simply there to rapidly increase your KO and Chain numbers. This pretty much highlights why the Action Hack and Slash games developed by Omega Force are known as “Button Mashers”, as you will spend most of the game mashing the Y and X button as you take down different enemies. There are also a handful of creative bosses from past games, which are somewhat ruined by the number of times they are used over one-off appearances as they would have received in their respective title. Despite this issue however, the core gameplay is just as enjoyable as any other time it has been used.

As this is still a Legend of Zelda game, there are a number of ways which the developers incorporated ‘Zelda’ elements into the Warriors gameplay system. While each of the thirteen characters have access to their own distinct weapon (or sometimes two) ranging from a traditional one-handed sword / shield combo to a harp, all characters progressively unlock an assortment of traditional Zelda items including a Hookshot and Bombs which are used for different boss fights and hazards. Another notable inclusion is the rise of the ‘Bombchu’ which hasn’t been seem in some time. These are weapons that travel across the map by the enemy and risk taking down a base should they not be deactivated. A few other familiar nods to past games also make an appearance, and are fun to discover during normal gameplay.

Character progression is adequate and gets the job done, but lacks much in terms of challenge in order to perfect your characters. Levelling up doesn’t require much grinding, and even if you ignore a character for most of the game, you can level them up to the maximum level held by any of your characters by paying a sum of rupees. New skills are also learned through a ‘Badge’ system, where trading in loot and rupees will net you the skill you want – often with small perks or a new addition to a character’s combo chain. 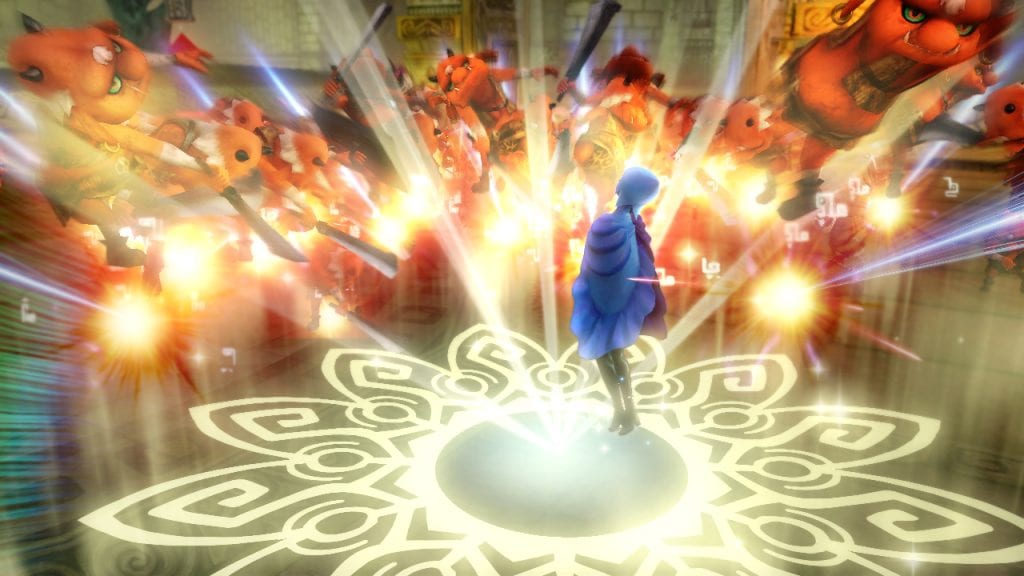 After completing the main campaign of Hyrule Warriors, there are a few options to continue your experience from being able to play any campaign with any unlocked character to what is clearly the highlight – “Adventure Mode”. In this mode you travel around an 8-bit recreation of the overworld map from The Legend of Zelda, with each segment of the map representing a particular challenging goal which ranges from Defeat X where every hit takes you down to one heart to defeating Y number of enemies in total. There is a good variety of different stages available, with some legitimately rewarding prizes for successfully completing them.Using earnable “search” items such as bombs and candles on the interactive overworld map, it is also possible to unlock special prizes such as new characters and weapons – rewarding decisions to replay challenges.

Hyrule Warriors was a solid amalgamation between Dynasty Warriors and The Legend of Zelda franchises that should appease fans of both. While its storyline was a tad rushed, the production value was high and the gameplay offering everything one would expect of a “Warriors” game with a few distinct twists that separate it from the other Omega Force releases this year (Dynasty Warriors 8: Xtreme Legends, Samurai Warriors 4, Warriors Orochi 3 Ultimate). My only concern however is that aside the crossover content evidently tailored towards fans… how many will actually enjoy the shift from challenging dungeons and thought-out battles to what could rightfully be considered “button mashing”?

Now that Hyrule Warriors has set the standard for “Warriors” x “Other Game” crossovers, I am curious to see how Dragon Quest Heroes: The Dark Dragon will fare when it is released on the PlayStation 3 and PlayStation 4 next year.