Nyu Media have just announced the release of their side-scrolling mech shooter Gigantic Army, a part of their third wave of Japanese indie games originally developed by Astro Port. Priced at $5.99, you can pick the game up through its official website and a number of other digital distribution outlets including GamersGate, Desura and Rice Digital.

Unfortunately like many other video games, Gigantic Army is stuck in Steam Greenlight which you can vote for HERE. 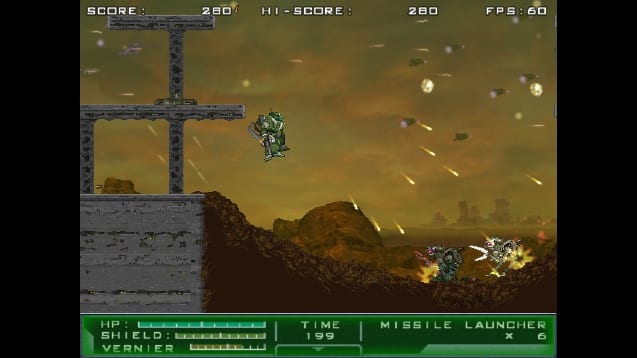 Gigantic Army is a 2D side-scrolling action game which puts you in command of the ‘GMR-34 SALADIN’, a robotic powerhouse bustling with enough weaponry to singlehandedly take down a planetary army, and versatile enough to dodge or deflect whatever the enemy throws at it within reason…. but this more or less comes with the genre. Gigantic Army takes you through six designed stages with gigantic boss encounters, mid-level boss battles and a total of nine different weapon combinations to work with against them.

Should it get out of Greenlight phase, the Steam edition of Gigantic Army will feature 42-achievements, trading cards and more of the usual content you should expect to see with a release on the service. While not currently available, a Linux version for Steam is in the final phase of development.