After much waiting on the behalf of fans, Square Enix have confirmed that their upcoming action RPG release of Drakengard 3 will finally be available for purchase in North America from the 20th May 2014 exclusively for the PlayStation 3.

For something a bit different, they will be including pre-order bonuses that are dependent on when you place your order – and this does mean that if you want to enjoy the game’s original Japanese dub without any waiting or additional cost on your behalf, you need to get in your pre-order soon. The three tiers for this program are as follows:

Tier One: Players who place their pre-order from today through March 3 will receive a special Japanese voiceover DLC and automatically unlock the two yet-to-be-announced bonuses.

Tier Two: From March 4 to April 8, pre-ordering the game will unlock the two remaining unannounced bonuses.

Tier Three: From April 9 until launch, players will receive the final unannounced locked bonus only. 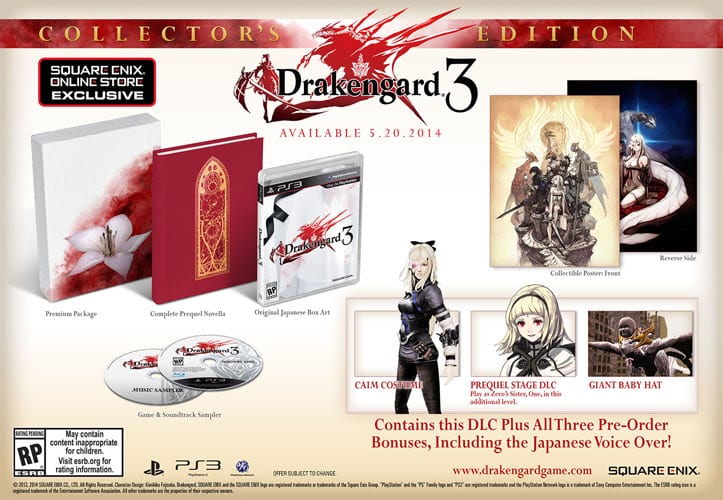 The publisher also has plans to make available a limited, 5,000 copy Collector’s Edition run which will include the following extra goodies:

The standard edition release will be available to purchase for $49.99 while the Collector’s Edition will be available exclusively through the Square Enix store. At this point in time, there is no word on any PAL region release dates, but keep your eyes on The Otaku’s Study over the next day or so to hopefully find out more.