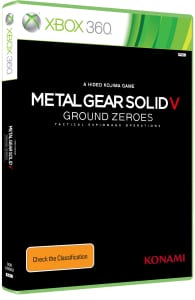 With Metal Gear Solid IV: Guns of the Patriots released all the way back in 2008, there has been a half-decade long wait for Kojima Productions and Konami to get their rears into gear and publish the next numbered installment in the franchise (Excluding all the other releases they have made in the period). While a set release date hasn’t been confirmed just yet, they have now confirmed that an Early 2014 launch window is most likely for its release on current and next generation Playstation and Xbox consoles.

Mr Hideo Kojima, creator of the Metal Gear Solid series has shared “The advanced capabilities of the FOX Engine have allowed me to tell the new story in a new way. There will be a significant difference in what METAL GEAR SOLID V: THE PHANTOM PAIN brings to the series, so we want to ease players into the new open world environment and its potential. As such, METAL GEAR SOLID V: GROUND ZEROES has been designed to introduce key elements, allowing them to fully benefit from all that the new game will offer.”

Ground Zeroes charts a rescue mission as users infiltrate a Cuban prison came, and sets in motion a series of events that cultimate in the plotlines of The Phantom Pain, to be launched at a later date. The prelude they hope will showcase key advances to the series made possible by its use of Kojima Productions’ FOX Engine, with a large open environment, and missions where time of day and weather have a dynamic effect on thegame and its missions.

Distribution in Australia will be handled by Mindscape Australia.