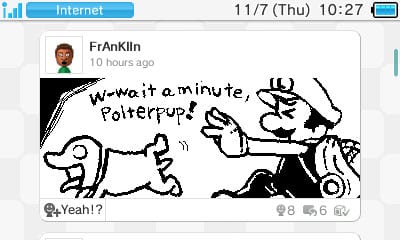 One of the major points announced during this mornings Nintendo Direct conference was that both Wii U and Nintendo 3DS consoles would be linked by a users Nintendo Network ID (The thing you created the day you purchased your Wii U and most probably forgot about since then). This update, set to hit sometime in December, will allow the consoles to share Nintendo eShop balances and more importantly, mark the beginning of the portable consoles support for the Mii Verse service.

The Miiverse service is one of the best aspects of the Wii U system, allowing users to share drawings, text and advise directly from their console through a message board like system. Youtube is also set to hit the Nintendo 3DS from later this month, although hopefully less troublesome to work than the Wii U app.