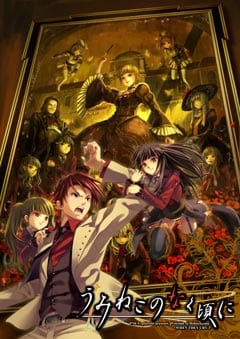 While the 26-episode anime series was released by Nippon Ichi Software America, this is the first time that the visual novel has been available for purchase officially on the international market. This edition is only available with the Japanese text, however it is very easy and recommended to download the English translation by Witch Hunt. Unlike many translations that don’t seem to fare very well with the original developers, Ryukishi07 is aware and apparently very supportive of the translations done of his 8-piece mystery series.

Both editions come with 4-arcs in total, the first serving as Question arcs and the second serving as Answer arcs. Will you be able to solve this whodunnit mystery – where it is not just determining who the culprit is… but if it were the result of magic performed by the Golden Witch Beatrice or a human. Unfortunately there is no word on if there will ever be plans to release the Playstation 3 edition published in Japan by Alchemist, however if you have been holding out to purchase a legitimate copy of Umineko no Naku Koro ni… this may be your best chance – even if it is digital download only.