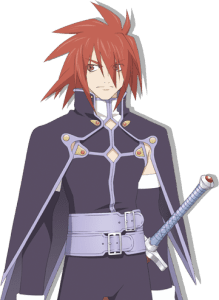 As one of the oldest party members at the age of 28, Kratos Aurion is a human Mage / Swordsman who uses a double-edged sword in battle. He is a mercenary, hired to accompany the Chosen on her journey of regeneration. He is a skilled swordsman — Lloyd’s swordsmanship pales in comparison. His cool demeanor and logical approach of handling situations irritate Lloyd, who tends to handle things completely the opposite way.