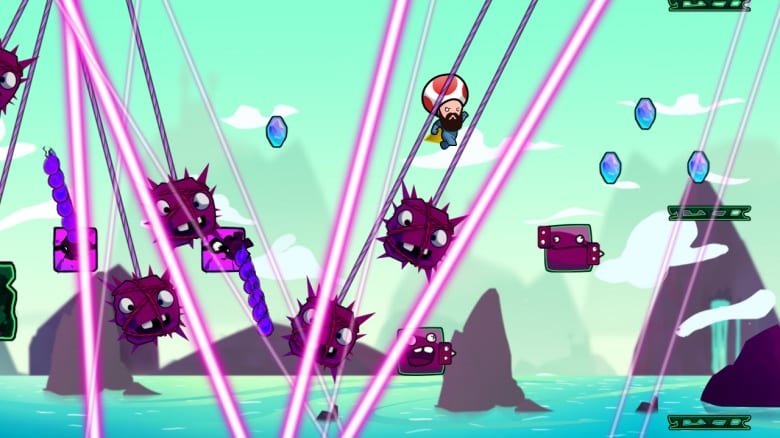 Despite having a title which gives an initial impression of being an average simulation game for mobile and tablet devices aimed at the younger audiences, Cloudberry Kingdom is pretty much the opposite. While their studio in Montpellier are covering new creative grounds in Rayman Legends, Ubisoft have also taken to publishing this new side-scrolling platformer by Pwnee Studios. While starting off simply enough the game soon starts ramping up the difficulty – potentially leaving you banging your head as split second button presses / jerk reactions and pure luck at times stand between you and the next level.

While this does not preclude the game from having a story mode, Cloudberry Kingdom is not the game you should go to if you are after a good storyline as most of the game is dedicated to platforming alone. You play as the customisable hero Bob, who makes his way to King Kobbler’s castle in order to save the princess. After failing to be strangled (After all, he has no neck), and a few cheap tricks on the part of Bob – he finds himself thrown into the ocean, giving the King and the princess time to escape. Bob is tasked with trawling through a labyrinth of side-scrolling areas in order to once again make his way to the princess.

The storyline is comical and entertaining albeit limited in scope, and considering how many levels make up a chapter, more cutscenes with similar witty dialogue would have fared much better than what was provided. 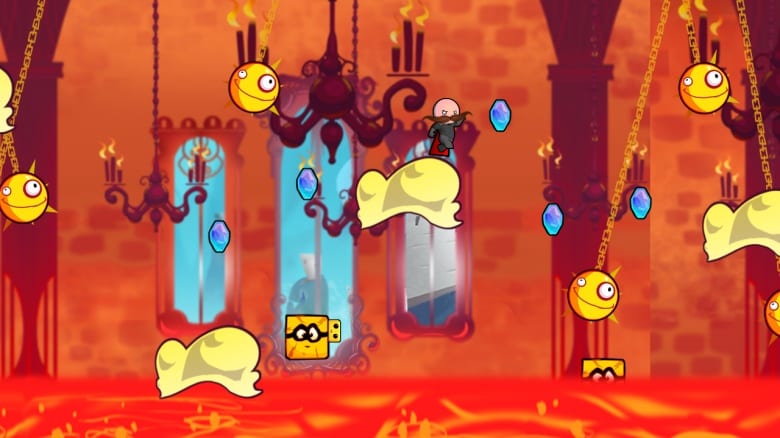 While there is some degree of repetition with certain hazard designs, I have no complaints with the visual quality of Cloudberry Kingdom. Both the environment and “character” designs were colourful, vibrant and more importantly pleasing to the eye, with a number of different environment designs to the mix. Given the 2D cartoon feel to the game, they added a number of quirks to the mix – from some rather unusual abilities / tools to some of Bob’s appearance repertoire.

While the few scenes that have voice acting are of a satisfactory quality, this is really the only high point of the game when it comes to the music / voice acting quality. The game pretty much loops its way through a small set of tracks without heeding much to the intensity of the stage or usually theme of the environment. 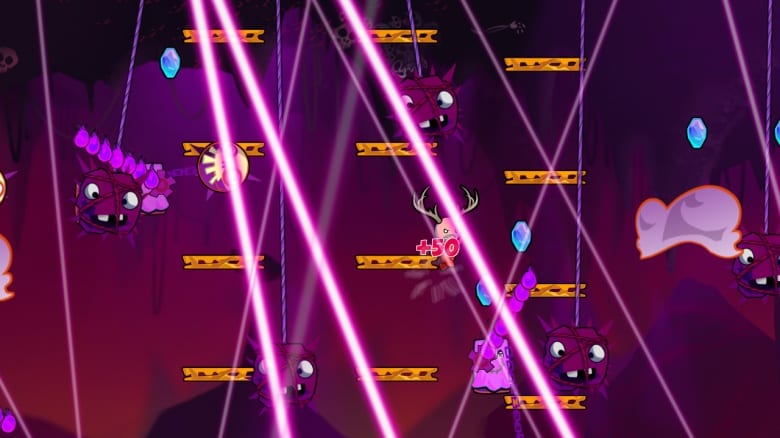 Irrespective of everything else Cloudberry Kingdom brings to the table, the one area it succeeds in is the actual gameplay – bringing potentially many hours of challenge, frustrating entertainment and replayability. At its core, the game has pretty much the same mechanics as most other basic side-scrolling platformers on the market. You go from the left side of the screen to the right side of the screen, you avoid hazards, you collect X (Which in this case are blue gems) to earn points and occasionally earn extra abilities.

What sets Cloudberry Kingdom out from the others is that the hazards have an almost maxed out difficulty threshold and the abilities are quite varied. From laser beams that shoot out from every direction, platforms that drop the moment you step on them and giant hanging spikes guarding the next spot you need to land are just a few of the simpler hazards that stand in your way and are eventually mushed together. While frustrating after a while you begin to feel a sense of accomplishment for every level you get through. 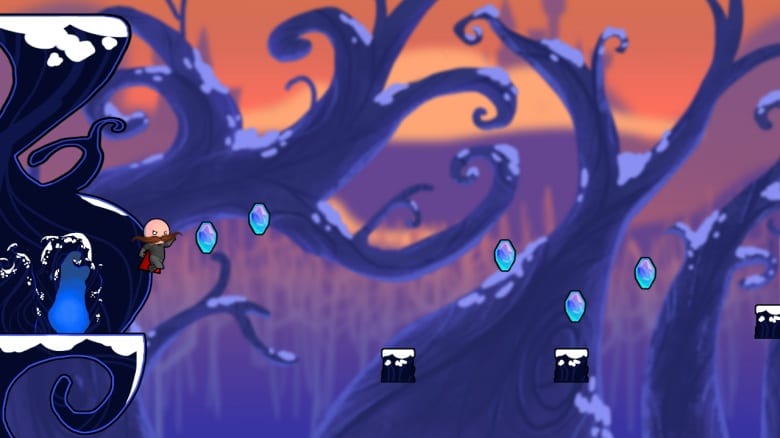 But level design alone wasn’t enough for the team at Pwnee Studios, and they throw in a sizable collection of abilities and tools that Bob is forced to use during his journey – unfortunately unlike Super Mario Bros. not all of these are helpful… or more like no help at all. He is initially granted the ability to perform a single jump, which in later levels can be expanded upon by giving him wings (Double Jump) or a jetpack (Flying for a limited period of time).

These simple abilities are later expanded into more challenging conditions such as “Hero in a Box” which only allows Bob to move by jumping, gravity reversal abilities which mean’s any jump can potentially send him flying into the sky and even a side-scrolling ship where he is just left to avoid obstacles which come hurtling towards him. Only one of these are accessible per level and the stage is adapted to take it into account so you shouldn’t be flung into an level you cannot complete. 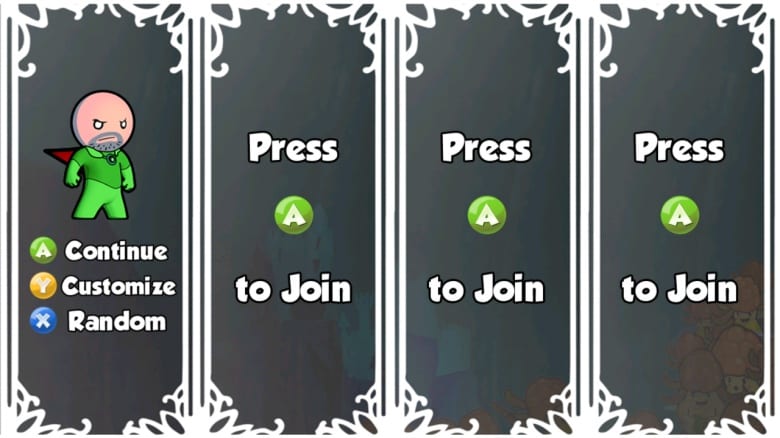 Outside of the main “Story Mode” which contains a few hundred levels, there is also the “Free Play” mode. This mode allows you to tinker and manipulate almost every variable imaginable with the game, and then have it spurt out a series of randomized levels based on your criteria. This is where a lot of the replay value is, and does a good job at taking into consideration the different ability and difficulty setting chosen for the stage. There are also four different “arcade” modes which offer more standard gameplay, for those who prefer not to go down the level creation route.

Taking into account that they have also included local multiplayer for those who wish to share the fun / torture with their friends, there is many hours of fun to have in this game for its price point of $14.45 AUD. Cloudberry Kingdom is not for the casual gamers, but is instead for those who enjoy a considerable degree in their side-scrolling platformer and don’t mind their character failing more than a few times. The title may give the impression of being a childish game, but underneath its name is a game that is challenging and addictive.