A Belated Game Review of The Last of Us

My apologies for this belated review, however after a rather lengthy process I am finally at the point where I can share my point of view on The Last of Us, the latest hit game from Naughty Dog that has seen raving from gamers all over. Sure it has already been hailed by media outlets as one of the greatest games on the Playstation 3 this year… but does it live up to my own expectations and the standards set by Naughty Dog’s earlier releases in the Uncharted series? That is what I intend to tell you in my review of The Last of Us. 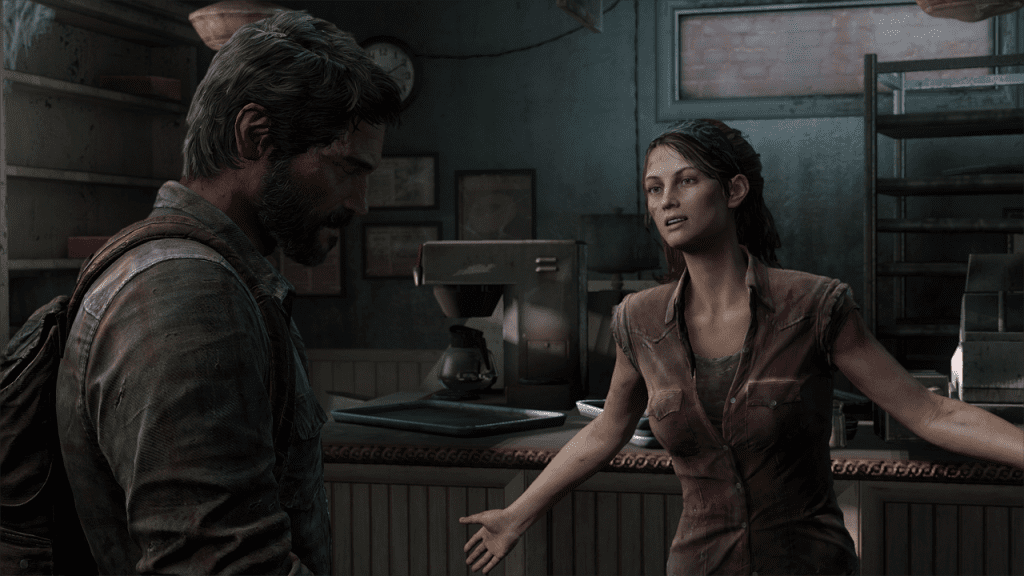 20 years after a pandemic has radically changed known civilization, cities are abandoned and being reclaimed by nature, infected humans run wild and survivors are killing each other for food, weapons; whatever they can get their hands on. Joel, a violent survivor, is hired to smuggle a 14 year-old girl, Ellie, out of an oppressive military quarantine zone, but what starts as a small job soon transforms into a brutal journey across the U.S.

I have come to expect different experiences from each of the Sony Computer Entertainment first-party studios that are situated around the world. For example with Media Molecule you can generally expect fun games that thrive off the creativity and imagination of the user and with SCE London Studio I have come to expect games that I can pull out when some mates are around and expect a good night. But especially this generation of consoles, with Naughty Dog I have come to expect a heavily storyline oriented experience that would keep my eyes glued to the screen and mind ticking away. This is the experience I had with The Last of Us. 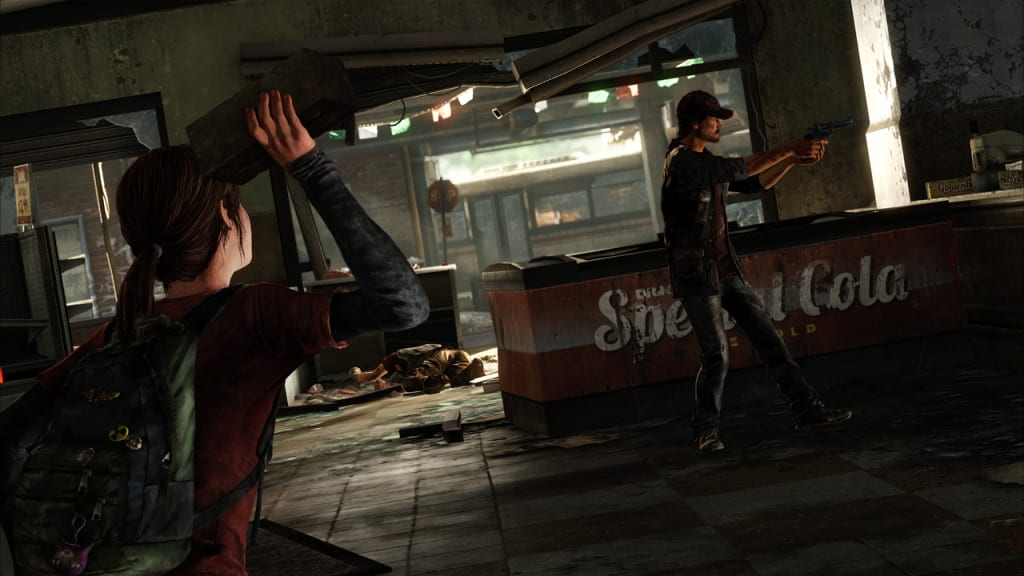 Aside from the brief synopsis above I am not going to discuss much on the storyline. It is an experience you are better off jumping in without any pre-existing knowledge of the events or even too many expectations of what you will most probably see. However I will say that at least until Quantic Dream’s BEYOND: Two Souls you will most probably not find a better storyline presented to you this year. Following the tale of Joel (Troy Baker) and Tess (Anna Wersching), they are commissioned to escort a young girl named Ellie (Ashley Johnson) across the quarantined pseudo post-apocalyptic world. You will meet some memorable characters, witness some emotional moments and become stunned at quite a few plot twists that come along their journey.

The Last of Us is not only about a journey, but is a journey and an experience to play. With each generation of consoles you expect to find what I would call “staple” games that everyone should play. While most of them would come under this classification for their gameplay mechanics, The Last of Us should be for its masterful storytelling. 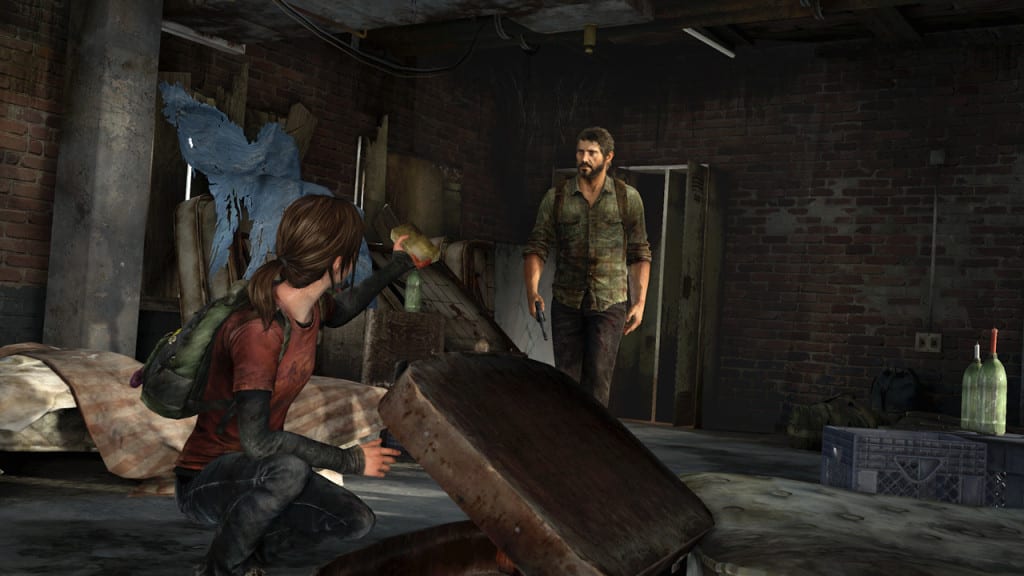 While my experience with The Last of Us was hindered at times by excessively dark environments and a couple of odd visual glitches (Often involving Joel losing his ability to show animation), it is hard to deny that Naughty Dog put in a considerable amount of effort when it came to capturing the game world which has been under heavy quarantine for the last 20 years. The environment and landscapes were highly detailed, and a lot of work was put into all the little details to an extent you don’t always see in a game. More importantly the environments were not necessarily designed to be the prettiest on the market however could quite easily best most games when it came to setting the tone.

The environment designs are coupled by character models that leave visually impressionable characters that has each one standing out from the crowd…. not that you really see too many crowds within this game. Aside from the aforementioned animation bug which I found the only solution to be resetting the game, overall the animation both during gameplay and the in-game cutscenes were effective and were coupled well with the actions and facial expressions of the characters. These two elements combined really contributed to and aided the storyline in drawing out every bit of emotion. 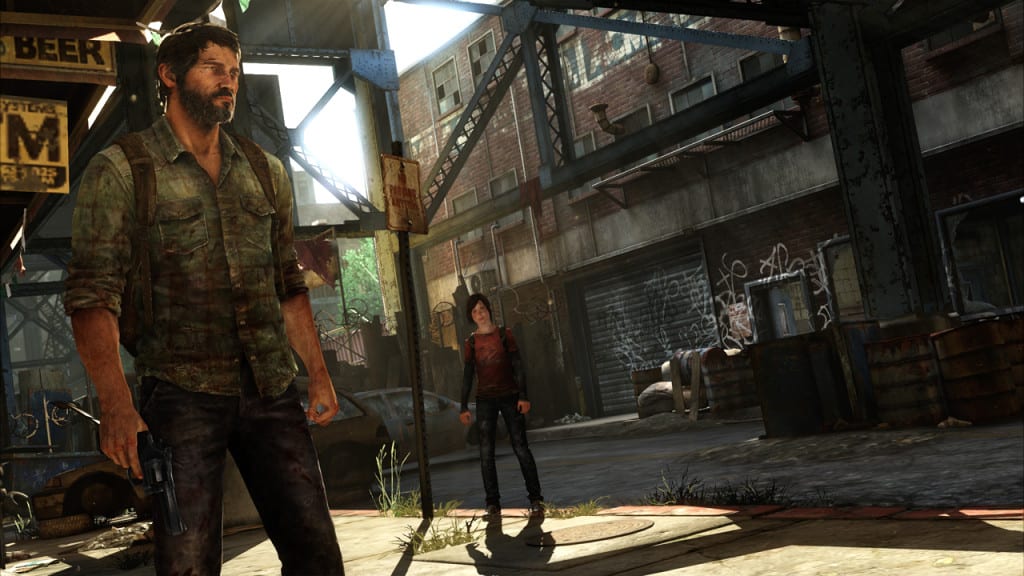 The music of The Last of Us was composed primarily by Gustavo Santaolalla who holds a number of awards and has the backing of a sizable filmography. The musical score is by no means intrusive, but instead amalgamates with the other aspects of the game to provide an added layer of emotion and works well across the board.

The English voice cast also packs a few big names who play their role well. Troy Baker who has been noted for his many anime and video game roles (Eg. Catherine, Persona 4 etc) serves the role of Joel well and is quite possibly one of his most notable role yet. Ellie on the other hand is voiced by Ashley Johnson who since 1990 has had extensive roles on the big screen albeit many of her past video game roles being based around the Ben 10 franchise. She also matches her character role well with enthusiasm and emotion. Outside of these two characters you can expect voice roles from people like Annie Wersching, Merle Dandridge and a few other surprises you may or may not be expecting. 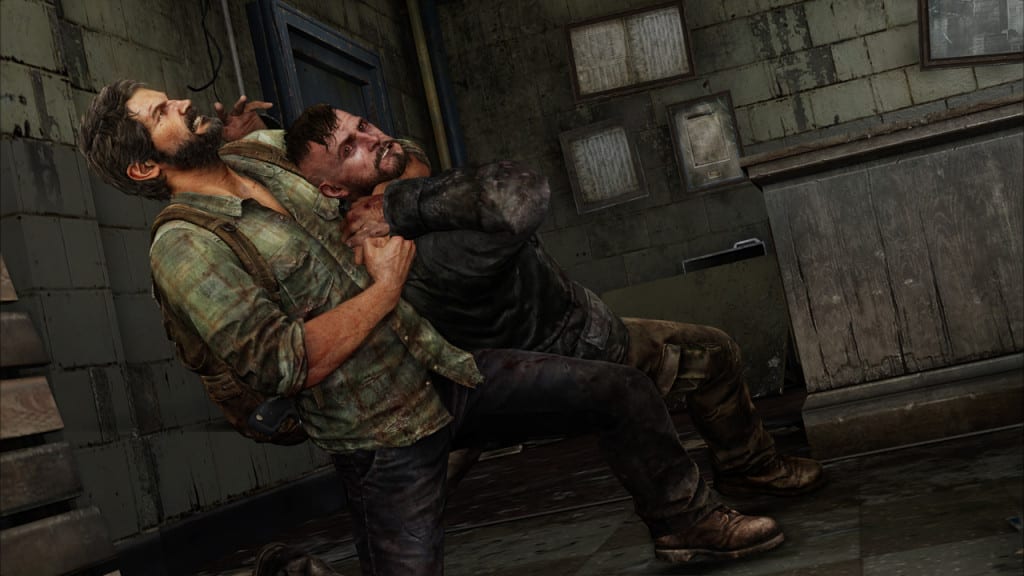 As this is not Heavy Rain, one would still have to expect some good gameplay out of this title to truly make it one of the gaming greats. Fortunately it seems like Naughty Dog have taken what they learn’t from earlier Uncharted installments to heart and built upon it to make a truly memorable gameplay experience. The game makes use of third-person shooter mechanics and while there are occasions when you can feel free to jump out from your cover and take down paths of enemies – given the limit of bullets and enemies that can one-hit-kill you most of the time you will need to be articulate in your actions to ensure every enemy is taken out as stealthily as possible. Outside of your ranged weapons you also have use of your fists, a number of melee weapons and items that can be used to distract enemies in your past… and all have their roles in the game.

Most interesting is that they chose to give Joel the supernatural ability to listen and in turn vision his surroundings if he is behind a wall or something along those lines. It is a system that I personally didn’t use too much and to an extent cheapened the game (Impact not logistical wise), but in darker areas or for the cautious this does help. While you play as Joel, Ellie despite her age is not simply a useless companion and will aid you quite considerably. NPC characters also join you for moments in the game, and all the non-infected characters often interact amongst themselves quite frequently during battle and outside of it – giving you an augmented experience of working with a team.

The range of infected and human enemies are good, and often require a number of different strategies to come out victorious. From different required weapon styles to different approach tactics, don’t expect to do the whole game using your favorite weapon or attack style. To cater to this they include a crafting system which allow you to craft real-time and makes use of all the extra trinkets you find lying around on your journey. Especially considering that almost all materials are now in scarce demand as with bullets, every item you pick up can count – especially on the higher difficulty settings. Joel can also upgrade himself and weapons through the discovery of pills and other supplies found on his journey – so it becomes a matter of finding out your ideal playstyle and balancing it with the need to be versatile in any situation. 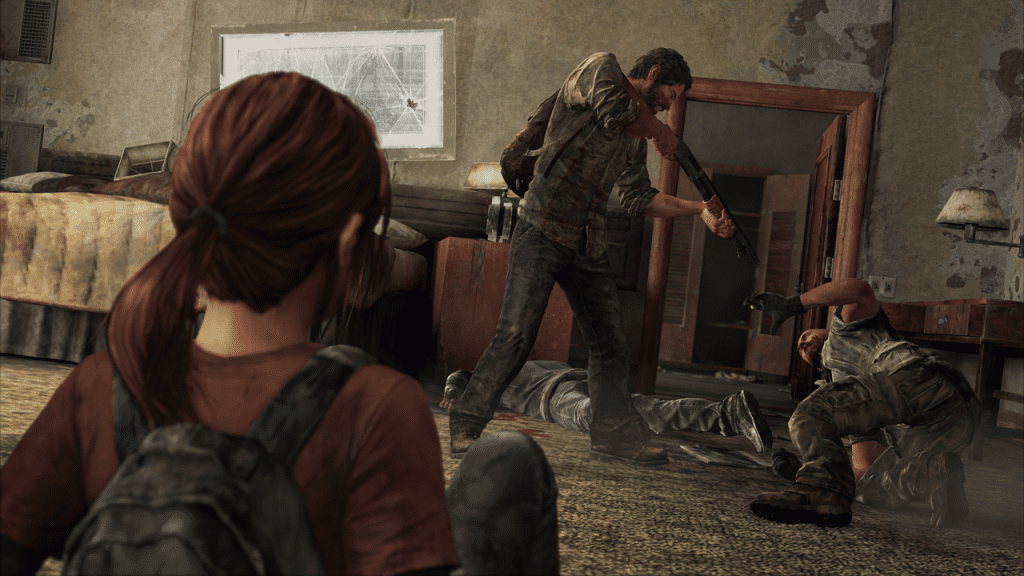 As it was with the Uncharted series you are not expected to spend all your time in battles against the infected and other threats, and you will spend quite a fair bit of your time making your way through the ruined landscape. Obstacles, high platforms and hidden collectible goodies all stand in your way, as well as optional and secret conversations to give you a deeper look into the characters. This coupled with everything else that makes up the single-player campaign complements the rest of the game well – and while I could see it not appealing to everyone (It took me a while to get into the swing of things) it ends up sucking you in as you rush to the next plot point.

As with many of their recent games, The Last of Us also comes with a simple online game experience with some small degree of Facebook integration as you become the leader of a Faction teamed with your Facebook friends randomly picked out of the mix. While it ties into the whole experience reading that your mates are all cooking rat, the true online experience comes from two simple albeit enjoyable different online modes. The game modes are Supply Raid which has you whittling down the number of lives the opposing team has while Survivors involves each member of the team only having one life. These modes are both played 4 vs 4 and is the best of seven, with the winning team earning additional supplies to those initially collected on the field. These supplies feed and increase the number of members your faction has.

The online multiplayer may not have the draw that the single-player mode has, but it still provides a good degree of customization and a solid selection of stages to choose from. It is a nice add-on that let’s gamers test the skills they have honed while playing as Joel and Ellie in the single player campaign.

It took me a couple of hours to really get into this game, and I initially found myself playing this game in small bursts. However after I pushed myself to complete the game within an hour I found myself hooked and fully embracing the charm and challenge that The Last of Us had to offer. While especially in this generation of gaming the Uncharted series has served as being the IP that Naughty Dog has been known for… it has more or less been pushed aside by this title.

If you are after a great storyline accompanied by high standards in pretty much every other area… The Last of Us may very well be up your alley.

Overall Score for The Last of Us

Overall for The Last of Us I give the game the following grades:

Storyline/Character Development: A
Design: A-
Music/Voice Acting: A
Gameplay: A-
Replayability: B
Personal Opinion: A-

Therefore, I give the game an overall score of A.