For those who may have missed the surprise announcement late last week, Hideo Baba confirmed during the annual Tales of Festival event in Japan that Tales of Symphonia and Tales of Symphonia: Dawn of the New World will be released as part of a HD collection. This marks the franchise’s first release in this generation of consoles and for international audiences the first time ever on a Playstation console with the games having been released on the Nintendo Gamecube and Nintendo Wii respectively.

This collection (Currently with the tentative title Tales of Symphonia Chronicles) is set to be released in Japan on the 10th October 2013 with an international release in Early 2014. The lack of a delay similar to that with Tales of Xillia is assumingly due to all the localization work (Eg. Translations, Voice Acting) having already been completed. This release is also set to feature additional content, reportedly including new Artes cut-ins and costumes based on characters from Tales of the Abyss.

Follow Lloyd Irving through as he embarks on a grand adventure with his friends to restore mana back to the world of Sylvarant, a source of energy necessary for the survival of their world.  Along the way they learn of the parallel world of Tethe’alla, whose survival rests on the same source of mana Sylvarant needs to sustain life.  How will Lloyd and his friends find a way to ensure the survival of both worlds?  Tales of Symphonia takes the signature real-time battle system of the Tales of role-playing games allowing for direct control of their character through fast-paced tactical battles.

Tales of Symphonia: Dawn of the New World. continues the story from the previous installment by delving into the consequences set into motion by Lloyd and his friends at the end of the first game.  Take on the role of Emil Castagnier as he seeks to uncover the mysteries that have befallen his world.  Dawn of the New World advances the series’ battle system by introducing a new monster recruitment feature that lets players capture more than 200 unique monsters and train them to participate in battles.  Players have complete control over their roster of party members and monster allies, allowing for limitless combinations to take out to the battlefield.

But re-announcing this news isn’t the only thing that is new, with Namco Bandai also releasing the very first screenshots for the game which can be viewed below: 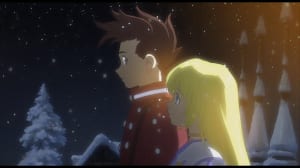 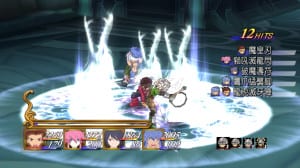 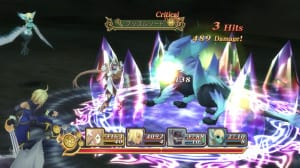 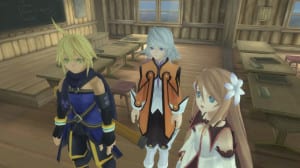