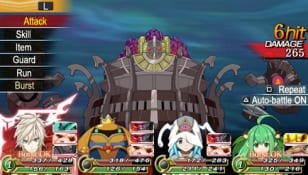 In a world inhabited by mythical beings, where colossal labyrinths called Titans tower over the land, there’s a legend that any being who can approach the Goddess Clunea high in the sky shall have a single wish granted. A powerful and self-absorbed dragon named Fang aims for those heights to meet with the Goddess and learn the name of the strongest monster in the world. His drive to find and kill this ultimate opponent and firmly establish himself as the dominant monster of the land is mighty enough to entreat the gods, but his boldness is also his undoing. Disdainful and disrespectful to the Goddess, she strips him of his dragon form and banishes him to the surface. Bereft of the power he once wielded as the Dragon Emperor, Fang must now adjust to surviving in a far weaker body as he navigates the dangerous mazes of halls in his quest for revenge upon the creator herself.

The first-person view RPG genre has never been my cup of tea, usually these involve a lot of dungeon crawling and very little visual appeal outside of the character portraits you see as you wander around the dungeons. Despite my own hesitances about this game, I jumped into it and found that it was actually pretty enjoyable to play through. While the game initially jumps between characters at the start of the game, you are initially given control of Fang (Aka. *Player_Name_1*), a fierce and powerful Dragon Emperor who after disrespecting the ruler of the world, Goddess Clunea, strips him of his powers and sends him back down to the surface as a mere human. From there, you are tasked with questing through and scaling dungeons to once again meet with the Goddess and obtain a wish. Along your journey you team up with a number of others including Niko a Spirit Foxgirl, Lapis a medusa, Hector a cowardly golem price and several other adventurers – each from a unique heritage and their own storylines… so they are not just silent party members. There was enough storyline here to keep me satisfied throughout my playthrough. 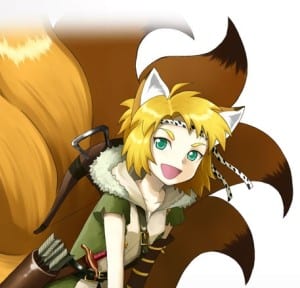 Visually the game is fairly mixed in quality, with positive and negative elements to both. Easily the best element to the design are the character designs, each of which were produced by a separate well-renown Japanese artist. Some examples of these include the character to the left, Mari who was illustrated by Sunaho Tobe (Hexyz Force), Lapis by Su Minazuki (Heaven’s Lost Property) and Fang by pako (Shining Force EXA). Each of these characters each have slight differences in their designs, but are all well illustrated, work well together and offers some variety.

Where the game is limited is in its dungeon designs which while I must complement for not being dull to navigate through with plenty of threats and twists ‘n’ turns, are not aesthetically appealing. While they do change designs of the dungeons occasionally throughout the game, there is nothing much to keep your interest for extended periods of time – although given past experiences this may just be the genre. Battle backdrops are modelled mostly after the dungeon designs themselves but has an nice angle which when coupled with the monster designs gives off a more face-on approach to the foes which is surprisingly effective.

The game looks great on the Playstation Vita’s high resolution with no noticeable graphical problems.

The music was primarily composed by Tsutomo Narita with a couple of the games primary themes including the Main Title and World Map themes being produced by acclaimed Final Fantasy series composer Nobuo Uematsu. The game has a great selection of tracks however not a great variety of them – with only a couple of dozen included in this entire release. The battle themes are most noteworthy, each providing some badass catchy tune which provides some extra excitement to battles.

The game also includes a solid voice acting track by some notable talent such as Troy Baker, each who contribute a performance that is appropriate for their characters intended emotions, moods and personalities. The game does not offer the Japanese dub, however for those who choose not to listen the English dub you do have the option to mute it. Not all of the game is dubbed but a significant portion of it is. 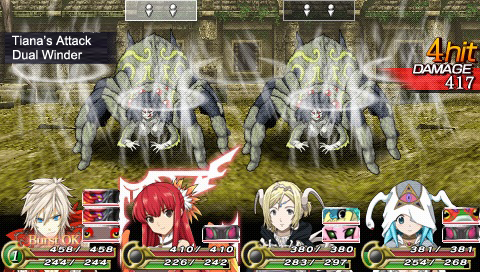 As I stated in the opening paragraph of this review, the game is a first-person view RPG comparable to other similar titles as XSEED Games’ own Wizardry: Labyrinth of Lost Souls for the Playstation 3 and Class of Heroes for the Playstation Portable. This means that instead of viewing your characters wander the dungeon, you will be wandering through the dungeon as your main character. You can party with up to four characters (You unlock them as you progress through the game) and navigate your way through dungeons of increasing difficulty. The games combat system also takes place in first-person view but follows customary RPG mechanics including the ability to attack, use skills and items. Where Unchained Blades differs is that for each of your four main characters you are able to have four additional monsters (Followers) alongside them for a total of 20 party members.

These monsters are not controllable but instead they will attack and defend you when you are attacking or defending yourself. To unlock these monsters, you have to perform “Unchaining”, where your characters charisma is high enough and they have had sufficient damage done to them to warrant recruiting. While the recruiting minigame is simple, actually getting to the point where you can unchain them is difficult without dying yourself or defeating your target enemy. An example is that upon reaching the second floor of the first dungeon, you are required to have 5 monsters to take part in your first main boss fight. After an hour or two of casually navigating the dungeon I ended up with only four…. but the kicker is the game provides you with four initially so some grinding is required. There is an additional battle system known as “Judgement Battles” within the game, where all your Followers are pitted against an enemies Followers and can act as a hindrance to your progression as they can be quite challenging early on in the game. 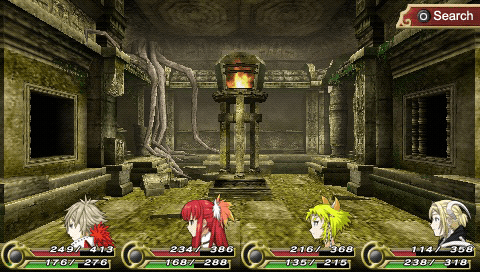 Each of the characters in this game feature a unique array of skills so you will make use of all of them as you make your way through the labyrinths. The game features your stereotypical EXP-based levelling system, although the route you take your character on will depend on what choices you make on the games rather extensive Skill Map which gives you some control over their development. Despite the at times frustrating grind and difficulty spikes, the game comes with some rather nice gameplay features, active storyline and strong  English voice acting. It is quite easily the most enjoyable RPG of its kind that I have played so far.

Final Score
Storyline/Character Development: B+
Design: B
Music/Voice Acting: A-
Gameplay: B+
Replayability: B-
Personal Opinion: B+
Overall Score: B+