Developed by: Edelweiss
Localized and Business Development by: Nyu Media
Published by: Capcom USA
Format: PC
Release Date: 29th June 2012
Special Thanks: Nyu Media for providing me with a copy of this game to review

I will be upfront that unlike other reviewers out there, I don’t have that great an experience at bullet hell games. Infact, my repertoire consists of just Deathsmiles which was developed by Cave several years ago for the XBox360 and Nyu Media’s own eXceed Collection, both of which were in their own unique ways interesting. While Ether Vapor lacks the precence of moe girls the other titles did, it delivered what I thought was a very nicely designed and reasonably priced shoot-em-up that looks like it came straight out of an arcade, and was one I would have spent quite a bit of time playing back in the day. 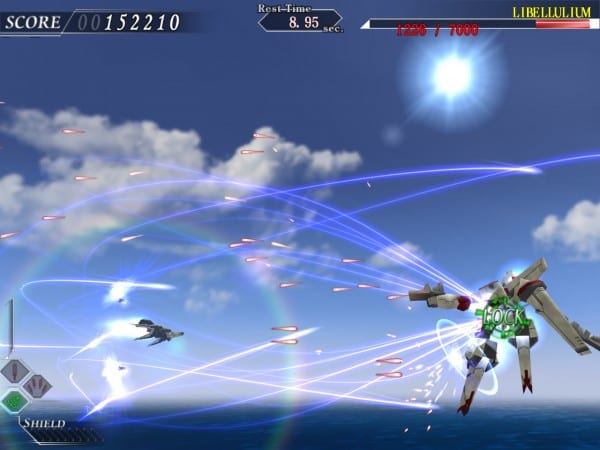 Ether Vapor Remaster takes your classic bullet hell formula and adds its own unique twists to it. The basic formula is simple, you are put up against ships much larger than yours and can shoot torrents of bullets against your craft, which you must either evade or shoot down depending on the scenario while trying to take down the main craft itself. When I first began playing these games I began with the impression that the stages would be easy to clear and only have moderate increases in difficulty, but with this game at least it proves a challenge from the first level – granted by a limited shield and the number of bullets on screen at any one time. While I have not perfected the art of this form of gameplay yet, it requires constant vigilance to identify patterns and to move your ship in an agile manner. and yes…. this does mean Game Overs…. quite possibly many of them.

As a 2.5D game, they make use of this by shifting the perspective of the craft and scrolling direction from horizontal to vertical, and then into the odd rail-shooting sections which have you trying to shoot down as many stray bullets as possible. This coupled with the consistently fast paced gameplay should hopefully appeal to fans of the genre and newcomers alike. In addition to all this, the game keeps you on your toes further by granting you three forms of weapons to use interchangeably, the “Gatling Shot” which is a concentrated forward attack, the “Winder” a wide-range spread attack but with weak offensive power and your basic lock-on shot which is the only weapon with a continuous fire and while not ideal for mobs of enemies is best for individual enemies. This coupled with some easy to grasp controls, and challenging boss fights left me with a good impression of the gameplay. 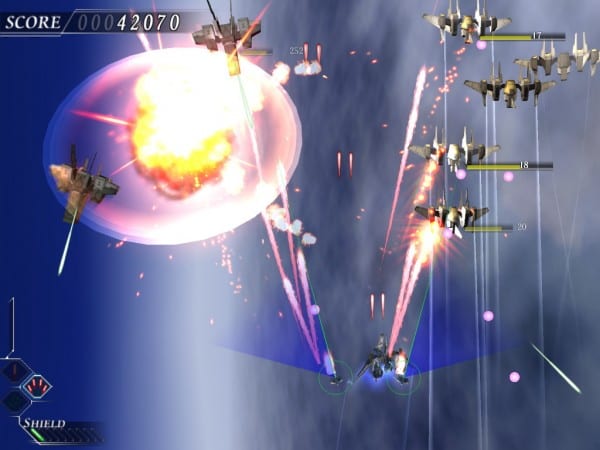 All hope seems to be lost for the country of Lydia in their war against Caldea, which has a huge advantage in numbers and technology. Into the midst of this war flies an unknown pilot in a prototype fighter…  His agenda and the secret to the his awesome firepower will be revealed as he takes on overwhelming numbers of enemy fighters and massive bosses to reach his final objective.

The focus of this game is the overall gameplay, therefore it is evident that the only reason for there being a storyline is to give some purpose for playing the game. These take place in brief moments of dialogue scattered thoughout the game and while there is nothing much to remark about, it fulfilled its purpose well. For those who would like to skip these cutscenes, you are given the option at the start of the playthrough to disable them.

While different from previous experiences with the genre, I thought the design quality suited the games fast-paced nature and although relatively dull in the first couple of chapters improved as you progressed through the game. While I would have liked to be controlling something more than a dull looking ship for the entire game, enemy crafts had a classic-arcade appeal to them and for the most part managed to keep the screen active during the entire time you are playing the game. I also appreciated that they chose anime-style characters to represent the controller of each ship in the game (Storyline related only of course) and despite looking eccentric at times suited the theme of the game despite the lack of expressions for each.  For those interested the game also has support for anaglyphic 3D, which unfortunately was not able to be tested during the scope of this review. I did however run it through my monitors 2D –> 3D mode and it looked really impressive in 3D.

The games sound effects sound pretty cliche but were able to accurately portray the actions performed – shooting, exploding et cetera within the genre. Each of the stages include their own backing music alongside a small set of additional tracks for the title screen, approach of a boss etc. These complemented the fast-paced action of the game well and were pleasant to listen to. 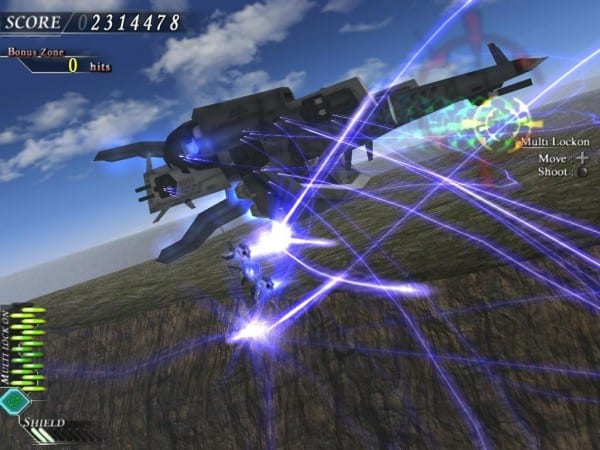 Overall I was more than satisfied with my experience playing Ether Vapor Remaster and thought it was a short but very enjoyable 2.5D bullet hell game I believe would be a worthwhile try-out for fans of the genre. While it may be lacking in storyline and design to some extents it does make up for it with a versatile action system and moderate replay value through leaderboards.